First I would just like to say how excited I am that One Tree Hill got picked up for season 7!!!! And Gossip Girl <3 and 90210!! I hope I can go to Wilmy again and I would love to see GG filming in NYC. YAY :D

Wednesday last week I got a call from Kiss108, the radio station in Boston, and they told me that I had won the “Ask Nick Lachey A Question Contest.” Nick was going to be in the studio on Friday morning to film the interview and we weren’t supposed to wear green.

Friday I drove myself up to the station in Medford, maybe getting a little lost in Medford b/c my GPS wanted me to take a right where it said “no rights.” So I pulled over, looked up the directions on my iphone and went towards Everett and completely ignored the GPS and needless to say found the station myself. Anyway, there were 5 other people who won and two people had brought someone with them. I filled out my paperwork to acknowledge that I won (my first time picking up a winning from a station). I won Britney Spears tickets in like 8th grade, but my mom had to get them and I won a $25 iTunes card, but wasn’t going to drive to Medford to get it.

So the interns brought us downstairs at like 11:05. By the way, I got there at like 10:56 after my GPS was being annoying. I was so afraid that I was going to be late. We were in a room in the web department with the cameras, a green screen and computers. I was picked to be the second person to ask my question, so I got my microphone on right away. They only had two wireless mics to we had to share. Nick did his interview with Romeo and then came down to see us. Just so you are not mistaken about it, Nick Lachey is SO Gorgeous in person. I mean yes, I knew he was and yes I have seen him in concert a few times, but sitting next to him…

We had our questions prescreened, so he knew them, but he still made like he was thinking. I asked, “If you were making a soundtrack to your life, what would be your top 5 tracks?” I think it was a good question and inventive, but I wish now I asked him something about being on One Tree Hill! That would have been even cooler. He filmed his scene or scenes this week in Wilmington. I knew he was going to be on, but I didn’t even think about it until I came home and read that he was filming this week. I think his funniest answer to my question was, “Beat It” by Michael Jackson, which he said he wouldn’t elaborate on.

After the interviews Nick filmed some web promo clips and then did a segment for the website called “108 Seconds.” He answered one word answers to a bunch of random questions like: “Favorite holiday? Favorite cereal? Funniest text in your inbox?” One was his favorite boyband and he just stopped. The guy was like, “We all know what you’re going to say, just say it.” So Nick said BBMak, but then he said 98 Degrees (which they used). For favorite holiday he said “Christmas…Thanksgiving” and made a face. They guy said, “That was funny, we’ll us that (which they did).

Nick did individual pictures before he left b/c the girl who I think was his publicist said individuals were fine. He had done the Mix 98.5 Lounge that morning and they did group pictures. Two of the girls at Kiss had gone to that too. I’m glad my picture came out cute! My video is a little corny lol, maybe I just don’t like to see myself on the screen, but it really was all good. 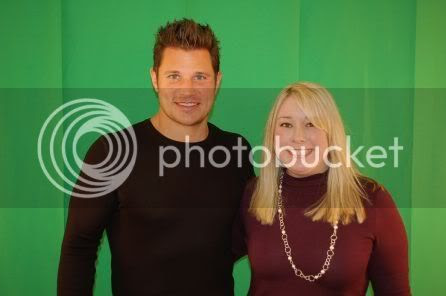 Overall, it was pretty awesome! Nick was SO nice, funny and attractive!! It was cool to see how they do things in radio! My first experience with a wireless mic lol!

I would not mind getting to meet Nicholas Scott Lachey again :D