"Super Skins kicked off with a big bang last year and we’re confident year two is going to be even better," stated Johnson. "Nick and I designed Super Skins to use the energy surrounding Super Bowl weekend to not only have a great time, but to raise a lot of money for some really worthy causes."

"Last years Super Skins proved to be one of the highlights of my year and a tradition we hope to continue for many years to come," stated Lachey.

Fifth Third Bank, a mainstay of Lachey’s beloved hometown, has signed on as Primary Sponsor of Super Skins. "It’s no secret that my heart is in Cincinnati and I’m so proud that Cincinnati’s own Fifth Third Bank is a partner to help raise funds to drive to some very worthy organizations," added Lachey.

"Fifth Third is thrilled to be a part of this event," said Brian Keenan, President and CEO, Fifth Third Bank - Tampa Bay Affiliate. "It is an honor to partner with this amazing group of celebrities to give back to so many worthy causes."

Nick on Jessica: I Can't Believe It's This Big of a Story'

Nick Lachey spoke to "Extra" about the recent media attention ex-wife Jessica Simpson has received about her weight, saying, "I wish her nothing but the best and I hope she's happy -- whatever size that comes in."

The singer is shocked by the story's media coverage, admitting, "I can't believe it's this big of a story and people are making such a huge deal about it. I'm never ceased to be amazed by people's reactions to things."

Lachey spoke to "Extra" while in Tampa for the Super Skins Celebrity Golf Classic. The star is raising money for the Nick Lachey Foundation and Jimmy Johnson Foundation. Lachey says, "The point is for everybody to have a chance to earn some valuable money for their charity... Everyone who played last year, had such a great time, [they] came back this year....We're very fortunate."

Nick and NASCAR champ Jimmie Johnson will host a bevy of athletes, actors, musicians and models in the golf classic on January 31 -- and last year's Super Skins weekend raised more than $400,000 for multiple charities! To get involved in this amazing weekend, go to SuperSkinGolf.com.

Johnson, Lachey golfing for a Good Cause

I'm actually driving out to Ohio tomorrow afternoon to attend this! It should be lots of Fun! And hopefully I'll bring back lots of Good pictures & news of a pending CD!!!

Now THAT is a cute picture!! Even thou I am A Steelers fan!! LoL 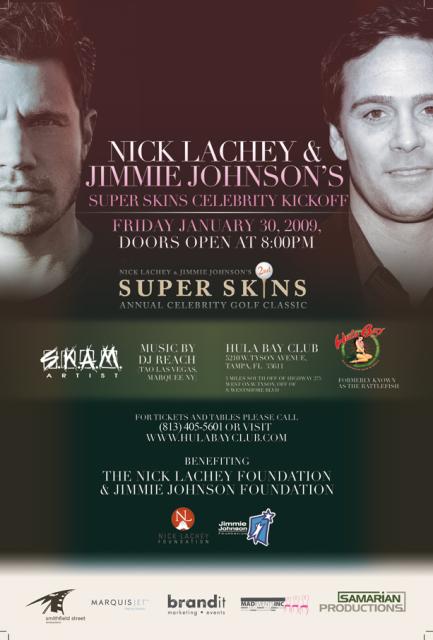 I haven't found a way to embed the code here yet. If I do it will be put up! Until then go here

Celebrate St. Patrick's Day in Mexico when THE MIX teams up with Apple Vacations, America's Favorite Vacation Company and takes the Eric & Kathy Morning Show on the road to broadcast live from a tropical paradise known as Dreams Villamagna Nuevo Vallarta in Riviera Nayarit, Mexico.

In addition to two days of live broadcasts, we'll be joined by special guests: Natasha Bedingfield and Nick Lachey!

Trips to join us are on sale now! Just click here to view your various travel options.

Dancing With The Stars - Celebrity Dancers On Dancing Difficulty

Dancing With The Stars - Dancing Difficulty For Men Versus Women

Dancing With The Stars - Dancers On Choosing Costumes

he was there to promote acharity he supports 'Feeding America'. He also said his single 'patience' will drop next week jan 27. You can listen it here http://www.nicklachey.com/

After feasting on their famous artichoke appetizer, Chinese chicken salad and rotisserie chicken, the trio waited for Nick’s BMW to pull up and rather than offering Cate the front seat, Vanessa casually sat shotgun while Cate took the back seat!

Attention all young people planning to be married: Do you think that you and your spouse-to-be are the next Jessica Simpson and Nick Lachey?

We're not asking whether you sing. Actually, we're not asking at all: MTV is. The music video network is on the lookout for two new fish to place in its marital fishbowl. Recording star Simpson and her ex-hubbie, formerly of the boy band 98 Degrees, entertained viewers for four seasons as the stars of the unscripted "Newlyweds: Nick and Jessica," which was canceled in 2005.

Now the network wants to revive the concept, but ditch its celebrity component. If you're about to become a Mr. or Mrs., and you don't mind inviting MTV's worldwide audience along for the ride, then you and your significant other might be the stars-in-waiting of "True Life: I'm a Newlywed."

Applicants must "appear to be" between the ages of 18 and 28 -- baby-faced thirtysomethings, you still have hope! -- and must have a wedding scheduled in the next couple of months. To apply, send an e-mail with a description of your relationship, as well as your names, city of residence, phone number, photo and wedding date to newlywed@mtvn.com.This e-mail address is being protected from spam bots, you need JavaScript enabled to view it

Stars such as Lindsay Lohan, Snoop Dogg and Ashton Kuchter are heading to Florida for the US Super Bowl.

Carmen Electra and Jenny McCarthy will also be in town to host a party which they promise will be "sexy and fun".

The annual Leather And Laces party is also hosted by US reality TV star Kim Kardashian.

Carmen, who hosted a party with Jenny at the Super Bowl last year in Phoenix, said it was a party for everyone - even those who don't like sport.

"I think sports fans are very enthusiastic, so during the Super Bowl there's a lot of energy, a lot of people. It makes for a much more fun, lively party.

Kevin Costner is also hosting party, at which his band will play, to raise money for charity.

"It's clearly not the need for attention. I've had enough of that for a lifetime," he said.

His gig is going head-to-head with gigs by hip-hop artist T-Pain and rap mogul Sean "Diddy" Combs, along with an affair crawling with Playboy hotties called Models And Bottles, and an event at a science museum hosted by Nelly.

Another party at the Hard Rock Hotel & Casino is hosted by Kevin Dillon of Entourage fame, and Jessica Simpson's ex-husband Nick Lachey is also hosting an event.

So While were in Flashback mode...Someone just uploaded this on youtube. Oh how I miss them as a group...
Enjoy

This is the last one of revisting Nick a few years back....While we wait *Patiently* lol....For the new CD to drop in March!
Enjoy

These videos are a little older. But i have never seen them before. So I am uploading them on here...while we wait for something new to pop up!! Enjoy!!

He talks about his new CD & Single.....and doown the line hopefully another 98 reunion...

Celebrity dancer Drew Lachey describes how they are thrown right into dancing and how every contestant can count on hurting themselves. Judge Bruno Tonioli mocks them for being...

Dancing with the stars tour 2006

Nick Lachey at the Z100 Jingle Ball 2008 behind the scenes

"Because I Told You So"
http://www.last.fm/music/Nick+Lachey...ain+Version%29

Named the celebrity spokesperson for the newly formed Heather Trew Foundation, Timmons plans a series of public service announcements for radio and television to get the word out about organ donation.

"Jeff is excited to be part of the Heather Trew Foundation," said Ruben Malaret, Jeff's Manager and President of New York-based Celebrity PR. "He is going to reach out to his fan base and youth all over the world to speak about the importance of becoming an organ donor. More importantly, he will also encourage them to share the decision with their family and friends to make sure their wishes are granted at the time of need."

The Heather Trew Foundation was created by Dwight and Judy Trew the parents of Heather Trew, to educate the youth of the world, about the importance of being an organ donor. Heather Trew was an organ donation recipient early in her life due to eating undercooked meat at a picnic. While she unfortunately lost her battle against e-coli, her legacy lives on encouraging others to donate organs for those in need. Meanwhile, the foundation has also dedicated itself to urging Congress to adopt stricter policies in making sure beef is better checked for harmful bacteria such as e-coli.

Timmons is working on recording several public service announcements for the Heather Trew Foundation that will soon be running on television and radio stations worldwide. He is also in the process of producing his second solo CD, currently planned for release in the summer of this year.