Love is in the air! Vanessa Lachey has three kids at home, but that hasn’t stopped the Top Chef Junior host and her husband, Nick Lachey, from keeping their romance alive.

When it comes to getting caught up in “the kid bubble,” the Dancing With the Stars alum, 38, admitted to Us Weekly exclusively that she and her husband, 45, keep compliments in mind.
“You forget yourself, like, telling them how much you appreciate them and how handsome they are,” she said. “Instead, it becomes all about school pick-ups, soccer practice and dance class, and you forget to say, ‘Hey, you’re really cute,’ or, ‘Thank you so much for taking the kids to the bus today.’ You just want to feel appreciated.”
As for Valentine’s Day, the pair, who tied the knot in 2011, are loving their low-key plans. “Just because it’s Valentine’s Day doesn’t mean that I want to get dolled up and get a babysitter,” Vanessa revealed to Us. “It can be just as romantic at home. I love that we’ve embraced that the last couple of years.” 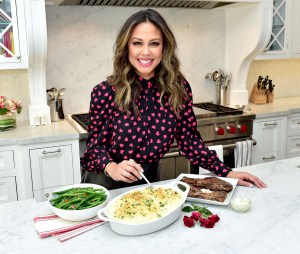 The former Total Request Live host and Nick will be cooking a meal together this V-Day. “I’m going to light some candles, light the fire,” the three-time mom, who partnered with Bob Evans to create two Valentine’s Day recipesOpens a New Window., explained. “Just because we’re home doesn’t mean that it has to be the same routine.”
Vanessa also has plans to celebrate the special day with their kids. She and the 98 Degrees member share Camden, 6, Brooklyn, 4, and Phoenix, 2.
“I love decorating the kitchen table because it’s the first thing they see when they come downstairs,” the former Miss Teen USA said. “There’s a mirror behind it, so there will be hearts on the mirror, and I decorate place settings. … I have the chair backs with their names on it and give them little things they can interact and engage with. No one wants to give their kids candy at seven in the morning, so it’s more puzzles and stickers as we’re sitting having a meal together.” 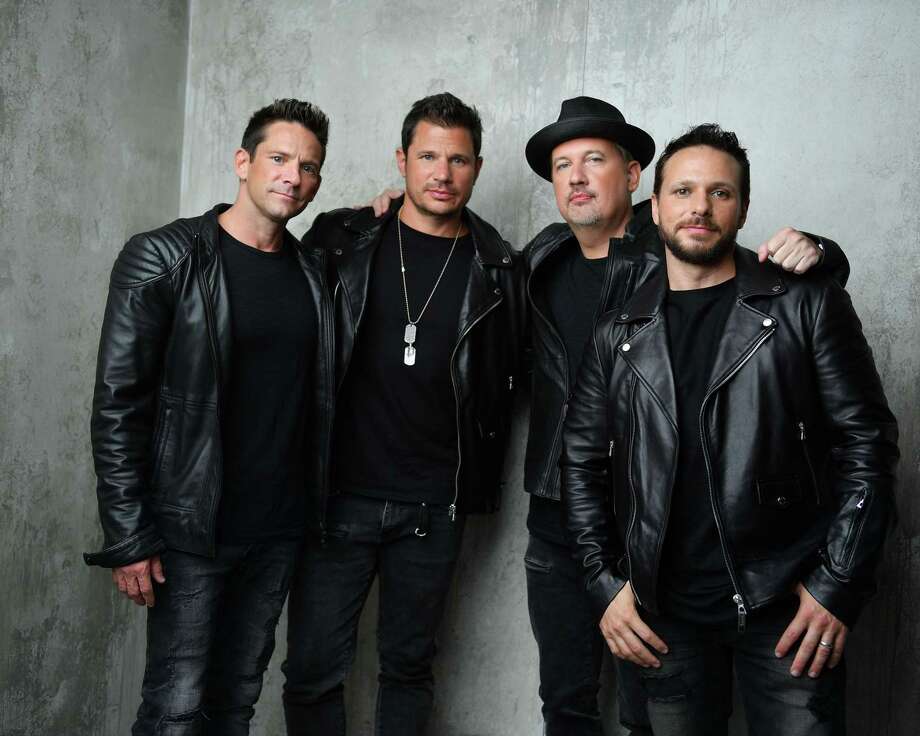 GREENWICH — Greenwich Hospital is asking supporters to “Give Me Just One Night” as the reunited boy-band 98 Degrees heads to town to headline its annual Under the Stars benefit.
The band will take the stage at special event at the Riverside Yacht Club on May 17 to support Greenwich Hospital’s pediatric and women’s health services. And it will be the original lineup of singers, with founding members brothers Nick and Drew Lachey along with Jeff Timmons and Justin Jeffre. The event starts at at 7 p.m. and the band will perform later that night.
The band sold more than 10 million albums during the ‘90s and reunited recently after an 18-year absence. They are known for the hits “I Do (Cherish You),” “Because of You” and “What Christmas Means to Me.”
“They put on a fantastic show and engage audiences of all ages with their timeless tunes and energy. We have all loved them for many years and are thrilled to welcome them to our home of Greenwich,” said Andrea Sinkin Jaffe, who is co-chairing the event with Katie Fong Biglin and Jennifer Turano. “Most endearing about them is their commitment to community, families, and health. They have a long track record of giving back and making the world around them a better place. We are honored and super excited they get to spread their good vibes to the Greenwich community.”
Under the Stars will give attendees “a one of a kind of opportunity” to see the group perform live “in an intimate setting overlooking Long Island Sound,” event organizers said. Platinum and Benefactor level ticket-holders will also get an exclusive red carpet meet-and-greet with the band members.
“We are thrilled to be performing at Under the Stars 2019 and supporting pediatrics and women’s health services,” the group said. “We cannot wait to perform an unforgettable set ... and look forward to seeing you then.”
All attendees will enjoy a seated dinner, entertainment from Greenwich-based disc jockey April Larken, a former co-chair of the annual event, and the chance to participate in both the live and silent auctions to benefit Greenwich Hospital.
In December, 98 Degrees made headlines when their tour bus was bootedafter idling all night in the parking lot of a Stop & Shop in Norwalk while they were in the area for a Christmas concert at the Ridgefield Playhouse. The treatment outraged fans, and even U.S. Sen. Chris Murphy (D-Conn.) jumped into the fray. “Whenever 98 Degrees comes to Connecticut they should be treated like the kings they indisputably are,” Murphy posted on Twitter at the time.
As part of Under the Stars, Greenwich Hospital will honor Karen Santucci, Bruce and Margie Warwick, and the Walker family, owners of Shreve, Crump & Low.
Santucci leads emergency medicine physicians from Yale New Haven Children’s Hospital in their work offering around-the-clock coverage in Greenwich Hospital’s Emergency Department.
The Warwicks have played an instrumental role in the development of Greenwich Hospital and helped to guide its physical expansion, organizers said. Bruce Warwick is a trustee emeritus for the hospital and served on its board from 1986 to 2017, and Margie Warwick was an active volunteer for the Gala for Greenwich Hospital Committee.
The Walker family has also been supporters of the hospital since they opened a location of their Boston-based jewelry store on Greenwich Avenue in 2015.
“Our Under the Stars honorees all share a deep sense of commitment to Greenwich Hospital,” said Norman Roth, Greenwich Hospital’s president and CEO. “Their ongoing dedication and support has helped secure our position as the region’s leading medical center and health care provider.”
The hospital’s pediatric care unit includes 24/7 emergency services and on-site inpatient care as well as a new specialty center at 500 W. Putnam Ave., with a variety of specialized services. Greenwich Hospital also has a Level III-B Neonatal Intensive Care Unit for sick or premature newborns.
For women’s heath care, Greenwich Hospital offers its Breast Center, Greenwich Fertility, maternity, gynecology and heart and vascular services.
Tickets are on sale at http://giving.greenhosp.org/uts2019. For more information, call 203-863-3865.
Also, 98 Degrees won’t be the only headliner playing in town in May. The Greenwich Town Party just announced that The Beach Boys and Lynyrd Skynyrd will be part of the all-day music festival held May 25 in Roger Sherman Baldwin Park.
kborsuk@greenwichtime.com

Nick Lachey Reveals Why Romance With Wife Vanessa Is Successful: Do They Plan To Have More Kids?

Nick Lachey opened up in an EXCLUSIVE interview with HL about how he & his wife Vanessa Lachey make their relationship work!

Nick Lachey, 45, and his wife of 7 years Vanessa Lachey‘s relationship owes its success to “communication.” In an EXCLUSIVE interview with HollywoodLife, the 98 Degrees lead singer and Charmed star told us how he continues to make his marriage work so well with the Top Chef Juniorhost. “We’ve been married 7 years, but we’ve been together much longer,” Nick told us while promoting Caribu, an interactive video app that allows Nick to still see his kids and do things like help them with their reading and writing while still on the road. “I think that’s part of it. We work through our issues. We did a lot of that before we even got married, but that never ends. It’s about communication. Marriage is not a walk in the park. No relationship is a walk in the park.”
And when it comes to the prospect of adding another child to their family — the couple already share three children together (Camden John, 6, Brooklyn Elisabeth, 4, and Phoenix Robert, 2) — Nick and Vanessa have discussed the idea and feel like their family is in a good place already. “I think we’re very content with three,” Nick told us. “It’s a pretty good mix, and I think at this point we’re calling it off!”
Nick also got real about the challenges that come with being a father. “It gets a little chaotic at times, especially with three under 6,” he added. “It’s kind of a circus in the house, but at the same time, we love it. I think the coolest thing for me is seeing how different they all are. The challenge is the time. You don’t get enough time to spend with them. It goes back to the touring, working and just trying to make the best of the time you do have.” And while Vanessa has not been shy about revealing her NSYNC fan status (she shared a throwback pic in Jun., 2018 of herself winning Miss Teen USA in 2018 and weeping as NSYNC serenaded her), Nick is understanding. “Lucky for her, I’m also an NSYNC fan,” Nick went on to say. “I don’t hold it against her. She’s got good taste. I think she was a fan of ours [98 Degrees], she was just definitely a part of the NSYNC mania.”
After meeting on the set of the music video for his song “What’s Left of Me”, Nick and Vanessa started dating in 2006. Nick recently revealed that they went to Hooters for their first date since it was the only restaurant open after a show in Trenton, New Jersey. While they briefly split back in June of 2009, Nick popped the question to Vanessa in 2010, and they eventually tied the knot on July 15, 2011 in the British Virgin Islands.