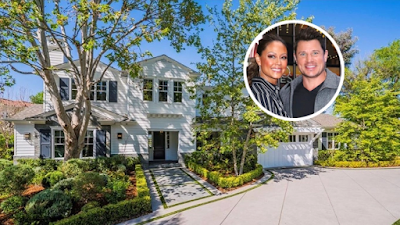 Just in time for the holidays (and COVID vaccinations!), Nick and Vanessa Lachey have sold their showbiz pedigreed Encino, Calif., estate for not quite $6.7 million and at the same time made an off-market deal valued at just over $5 million for a smaller manse in one of the more sought after foothill neighborhoods in the L.A. suburb of Tarzana, about 25 miles north of LAX.

The 98 Degrees lead singer, who hosts Nickelodeon’s “America’s Most Musical Family,” and the beauty queen turned TV spokespersons’ now former home in Encino was acquired by the couple in 2016 from the estate of late Mexican-American singer Jenni Rivera for $4.15 million. And, after it was floated as a whisper listing in late 2019 with an asking price of $7 million, the nearly 10,000-square-foot English Normandy manor house has been sold in clandestine deal to an obviously wealthy though not-famous couple.