98 Degrees, O-Town, Dream give nostalgic fans what they want on a humid night in Tuscaloosa 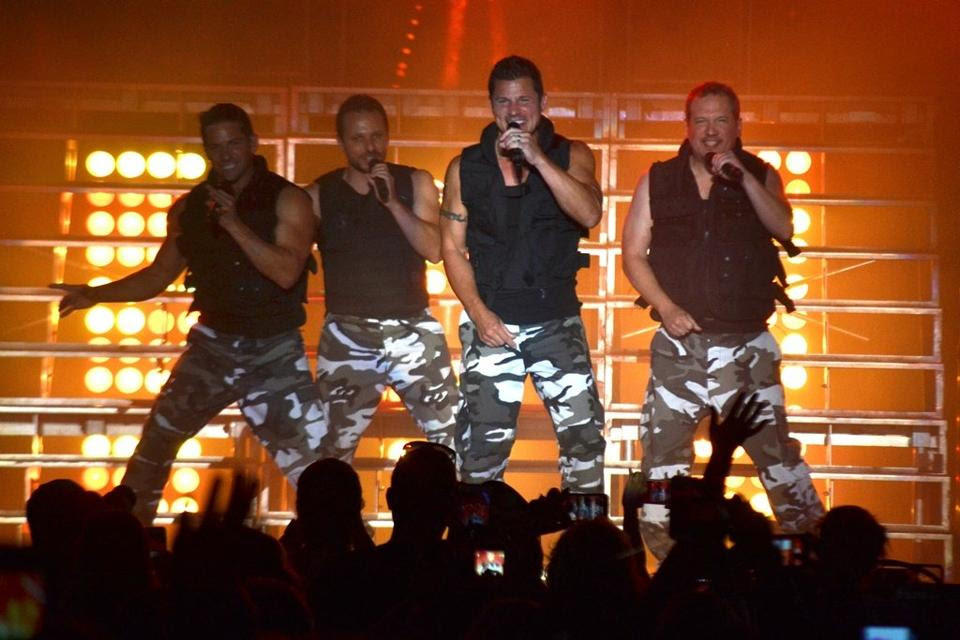 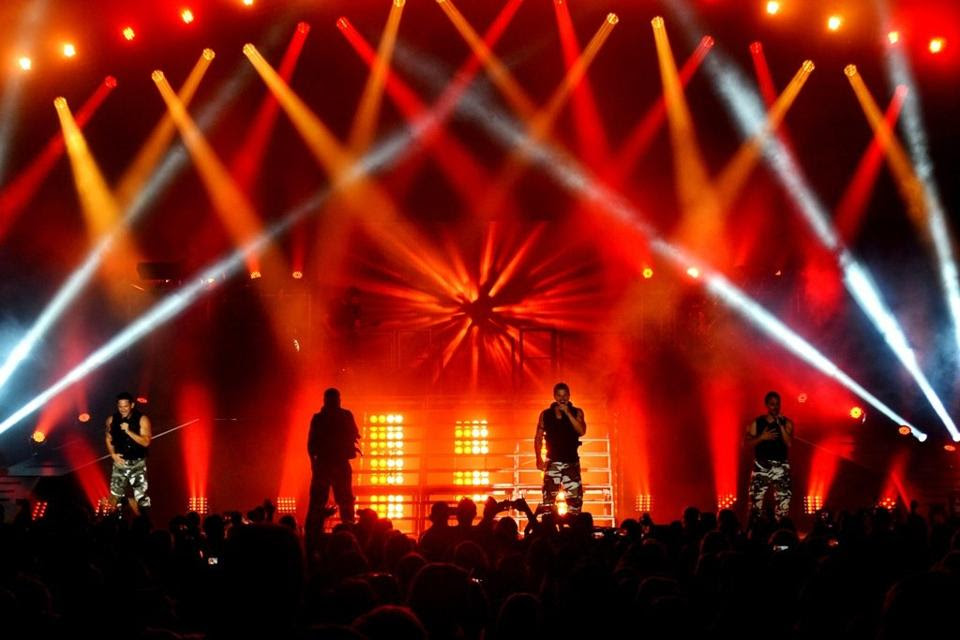 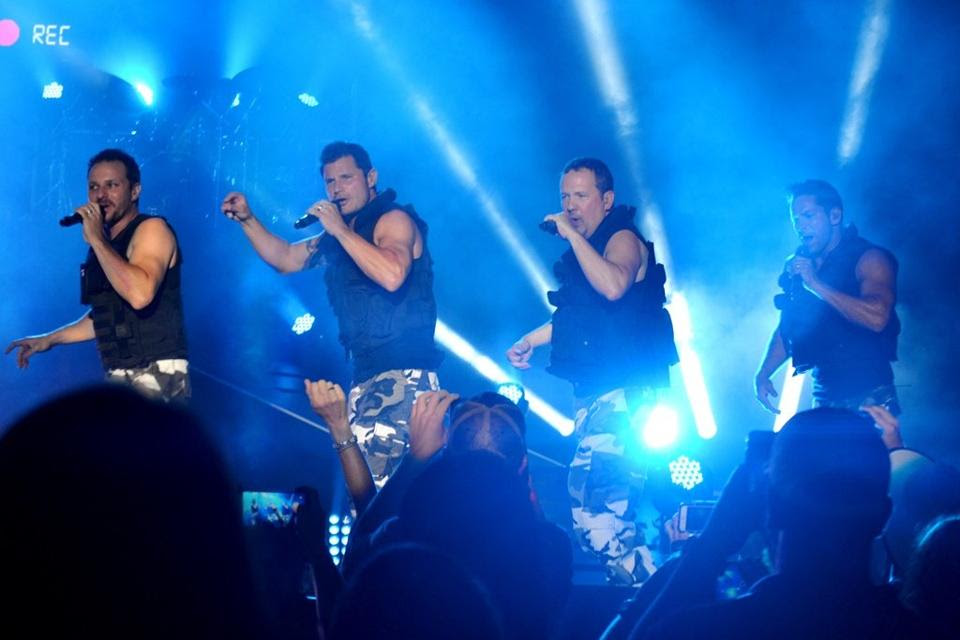 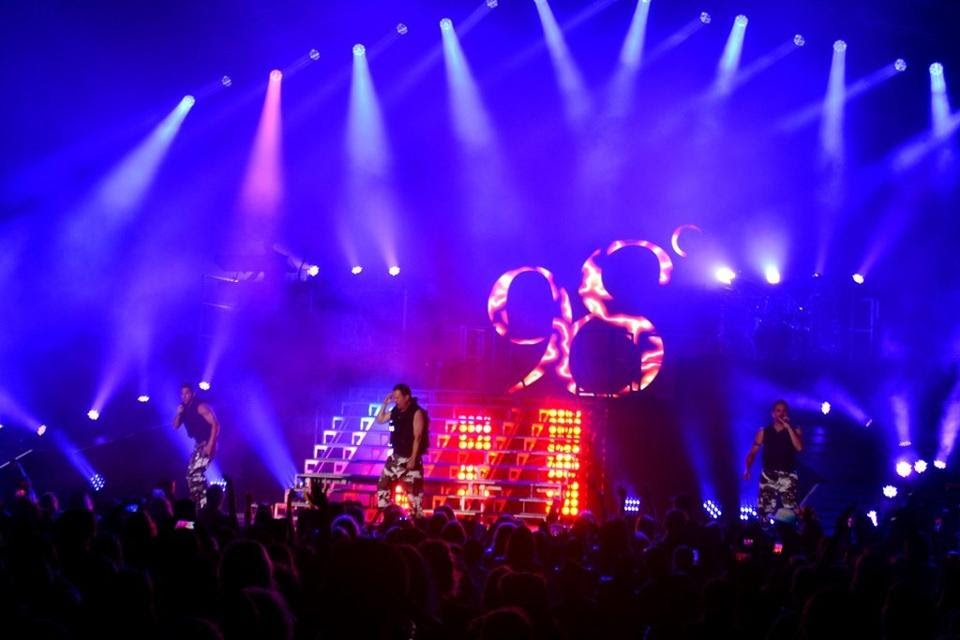 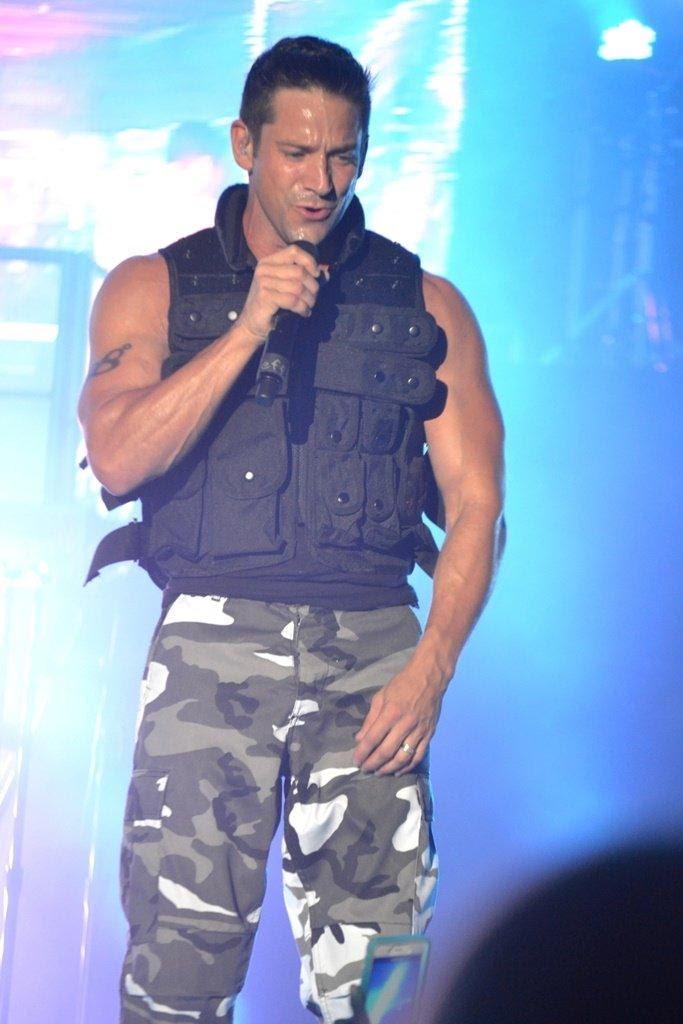 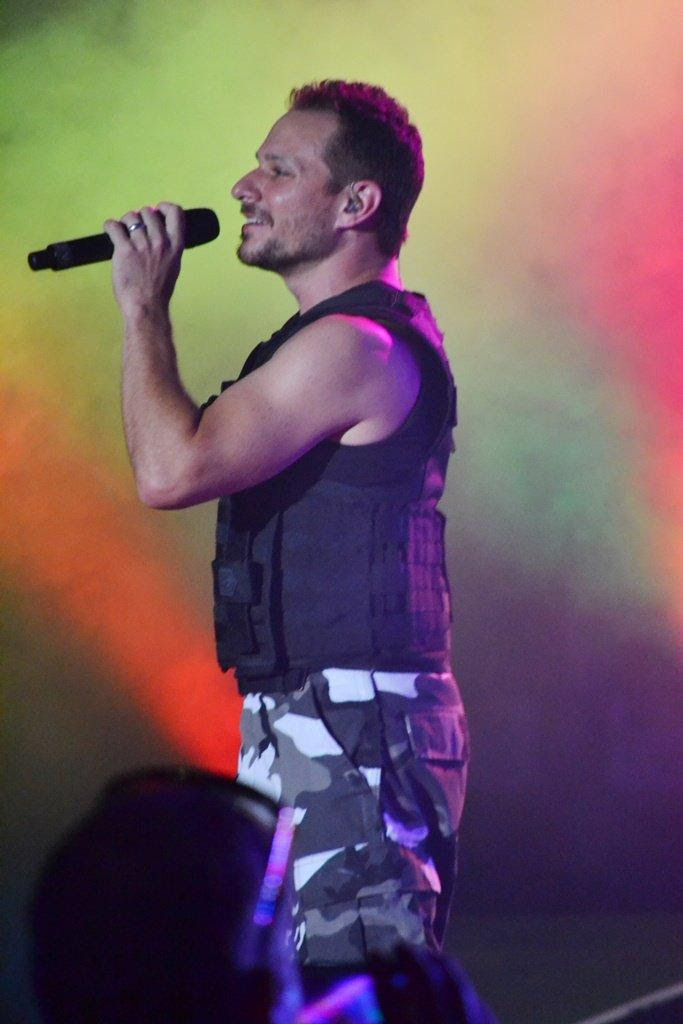 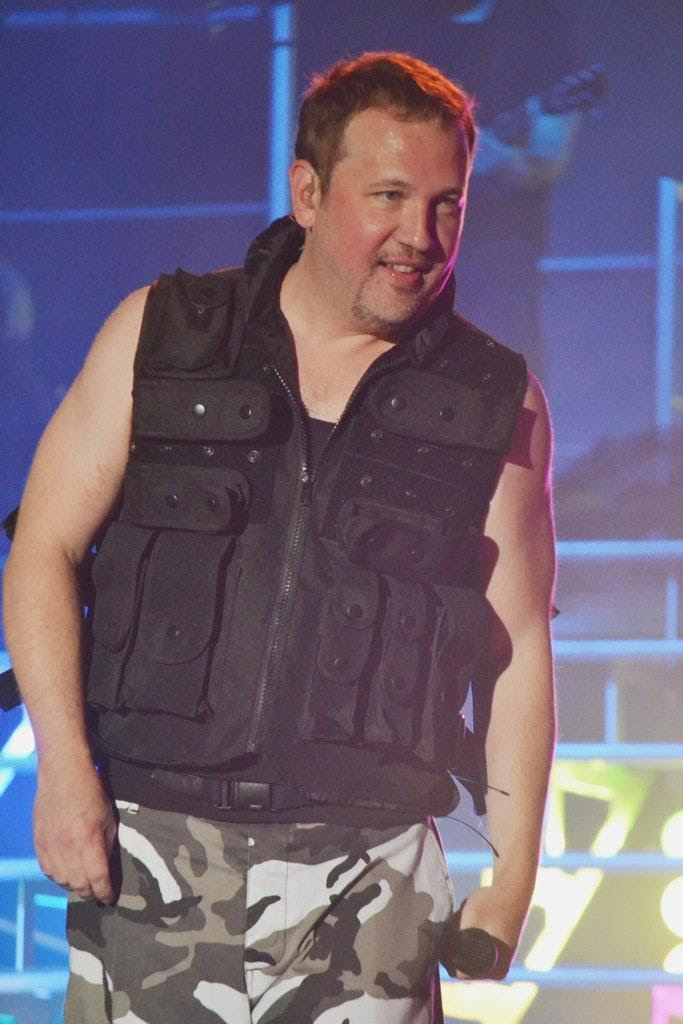 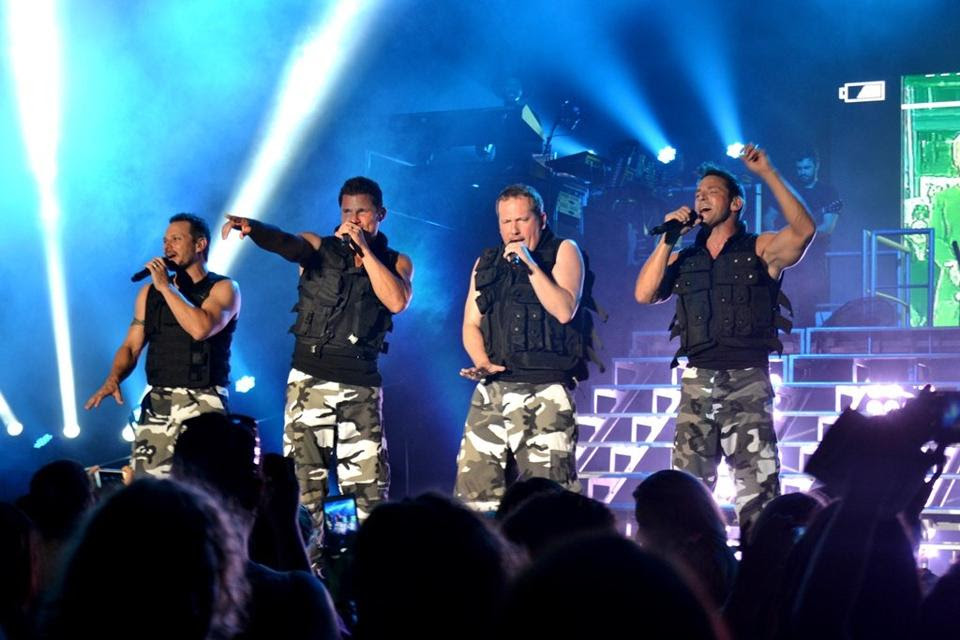 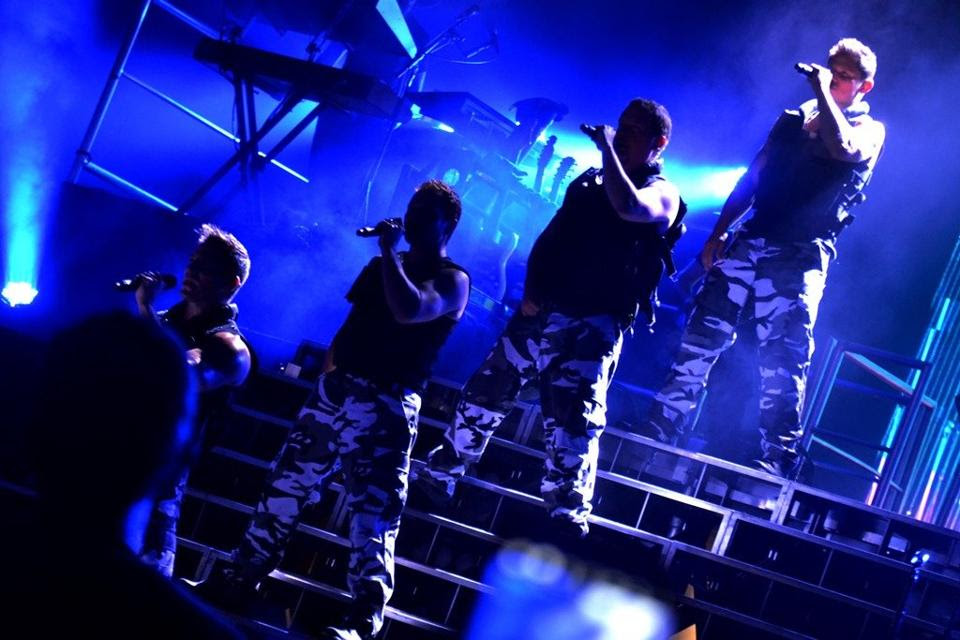 The My2K Tour pumped the Tuscaloosa Amphitheater with a heap of nostalgia in hopes of transporting fans about 15 years into the not-too-distant past Thursday night.
As hot and humid as ever in the venue, doors opened around 7 p.m. to a modest-enough crowd that the Amp closed off its entire upper section.
But about halfway through the show, the lower pit filled just about to its capacity, and fans of all four acts stood ready to rock and swoon their night away.
An impressively coiffed Ryan Cabrera opened the evening, using an unusual clear guitar as he strummed through his catalog of hits like "On the Way Down," welcoming everyone to the "My2K Hot as Hell Tour."
He'd close with a medley of familiar pop hits, leading fans in a "Seven Nation Army" chant as he finished his set.
Then came Dream, an American pop girl group who earned popularity in 2000 with the hit "He Loves U Not." They worked through a lengthy set until closing with their widely familiar track that got the fans on their feet in a hurry.
They polled the crowd to learn just who all felt excited about the night's headliner, 98 Degrees, saying "They might even take their shirts off." The ladies in the house sounded OK with that prospect.
In between sets, the video monitors projected a My2K music video playlist, playing hits from the early 2000s like Destiny's Child's "Bootylicious" and The Offspring's "Pretty Fly for a White Guy," all of which earned a singalong from fans.
O-Town next hit the stage, dropping one hit after another, including "Liquid Dreams" and "All or Nothing." One member revealed three band mates in the group were, in fact, single. That drew a holler or two.
That led to 98 Degrees, whose name seemed more than appropriate for this particularly humid evening. An impressive stage setup and actively colorful light presentation gave the smallish crowd a big show feeling, surely reminiscent of the group's peak performances in the early 2000s.
Some women in the front rows of the crowd got so excited, security prompted them to scurry back to their seats as they filmed with their cell phones as close as they possibly could.
I heard several people ask throughout the night about the sparser crowd than usual, "Why book a college-friendly nostalgia act in the middle of the summer when its target audience is mostly out of town?" In short, the venue has to book its acts when it can get them, and the artists' schedules don't cater to when the Amp can have them.
So when it comes to booking shows that might sell well when college kids are in town, the stars don't align every time. But those who came clearly got the night they'd hoped for out of the My2K Tour, with each act catering to the loyal crowds who have hung on to nearly every lyric of those songs from little more than a dozen years ago.

98 Degrees Partied Like It Was 1999 at South Side Ballroom

98 DegreesWith O-Town, Dream and Ryan CabreraSouth Side Ballroom, DallasMonday, July 11, 2016
On Monday night, nostalgia in the flesh walked through the door of South Side Ballroom. Five female friends had dressed for the show like it was 1999: overalls, plaid shirts, chokers, jean shorts, and the like.
The '90s-clad women were celebrating a 31st birthday with the help of Dream, O-Town, Ryan Cabrera and 98 Degrees.
Yes, South Side Ballroom was host to the My2K Tour. While the pop stars once filled arenas in the early 2000s, in 2016 they are performing to thousands of nostalgic women in South Side Ballroom on a Monday night.
The scene of the My2K Tour is young moms looking to get out of the house. Monday night, they did it with a relatively cheap concert ticket and the promise to see their J-14 posters in the flesh.

Dream ("He Loves U Not") opened the show, followed by Making the Band group, O-Town. O-Town performed as expected: kind of like a boy band out of their prime for more than a decade. Cabrera, a musician who was never meant to be more than a church worship leader, was next. With just him and his guitar, his vocals weren't great as he sang old songs, unreleased new ones and covers.
But finally after the old-school music videos in between sets and all the anticipation, it was time for the reason all the moms called in a babysitter for the night. It was the big show. It was mother-effin' 98 Degrees. You know, the awkward bronze medal boy band who played second runner up to the Backstreet Boys and NSYNC in the Boy Band Olympics.
98 Degrees is the band fronted by Nick Lachey. You know Lachey as Jessica Simpson's first husband. Caught up? 98 Degrees was there to rock your world! And they did it in their camouflage cargo pants and sleeveless black hoodies to bring everyone back to their favorite decade.

Well, there were some '90s mixed in there, too. In fact, during the middle of 98 Degrees' set, they outdid every great wedding band before them and played all the pop hits — while dancing! They covered Spice Girls, Britney Spears, Prince and even their boy band rivals, the gold and silver medal winners.
This kind of tour has the basic makings to be tragic. Instead of earning their living by buying a strip mall and calling it a day, these outdated musicians (if you can call them that; only 98 Degrees performed with live music) wanted to leave their families and tour again. And for the most part, it was pulled off.
98 Degrees, the easy highlight of the night, gave the audience exactly what they wanted: A way to feel young again. And while there's something a little sad about 40-year-old men wearing cargo pants and living in their glory days, they looked like they were genuinely enjoying themselves. They knew their purpose. They thankfully didn't sing any new songs. There was crowd interaction. Hell, there were even costume changes.
But the best part of all of this, kids, is one day you'll be celebrating your 31st birthday with $40 One Direction tickets in downtown Dallas.

Nick Lachey and Vanessa Lacheydefinitely needed a bigger crib!
The singer and television personality announced Friday that they are about to add a new member to their growing family with an adorable pregnancy announcement.
In the photo, the couple and their two toddlers are posed atop packed boxes on the stoop of their new house. "We got a new crib! Now we need a new CRIB!" the tongue-in-cheek announcement read. "#LacheyPartyOf5... and Wookie," Vanessa captioned the exciting shot on her Instagram account.
Plus, don't miss a glimpse of Vanessa's growing baby bump! Donning a long black sundress and floppy hat, the 35-year-old pregnant star is pictured cupping her belly as she holds hands with her son.

Instagram
The pair, who have been married since 2011, are already the proud parents of Camden John, 3, and 8-month-old Brooklyn Elisabeth. The two siblings will Spring 2017.
Just a few months ago, Vanessa dished to E! News about the possibility of adding a third child to the Lachey clan. "The second [child] has been different just in the sense that it's nonstop, but I love that," she explained in June. "It's busy and it's chaotic, but...it's what I've wanted and it's all I know right now and on top of all of that, I have the most amazing supportive husband."
"If we're blessed with no. 3, it's just going to be that much more exciting," she added. "If it happens, it happens!"
Well, it's officially happening! Congratulations to Nick and Vanessa on their happy baby news!