Visit NBCNews.com for breaking news, world news, and news about the economy\\

Visit NBCNews.com for breaking news, world news, and news about the economy

Nick Lachey - What's Left Of Me (Live on It Takes Two)

Another old video I just found that was uploaded. Enjoy

This is an older interview, but I have never seen it before so I know it hasn't been hosted on the Blog. Glad someone else has stuff from the past! Enjoy =)

via press release:
‘THE SING-OFF’ RETURNS TO NBC WITH SIX NEW GROUPS COMPETING IN TWO-HOUR HOLIDAY SPECIAL SET FOR WEDNESDAY, DEC. 17
Jewel, Shawn Stockman and Patrick Stump Serve as Judges with Nick Lachey Returning as Host
UNIVERSAL CITY, Calif. — Nov. 7, 2014 — NBC will air a two-hour holiday special of its popular a capella musical competition series “The Sing-Off” on Wednesday, Dec. 17 from 9-11 p.m. ET/PT. Six new groups will compete for a first-place prize of $50,000.

Returning judges Jewel and Shawn Stockman will be joined by Fall Out Boy frontman Patrick Stump while Nick Lachey is once again set as host.
Four-time Grammy nominee Jewel has enjoyed career longevity rare among her generation of artists. She has always been a charismatic live performer, earning the respect of other singer-songwriters, such as Merle Haggard, Bob Dylan and Neil Young, who, not only invited her to open their shows, but mentored her in the early phases of her career. After a tremendous amount of success as a singer-songwriter and more than 27 million albums sold, Jewel released a greatest hits album in 2013 that featured a collection of her best-known songs as well as two new duets with Kelly Clarkson and the Pistol Annies, in addition to a new track called “Two Hearts Breaking.”
She starred as June Carter Cash in the Lifetime biopic “Ring of Fire,” which earned four Emmy nominations. In 2013 Jewel released her much anticipated follow-up holiday album, “Let It Snow.” Currently, Jewel is recording her 13th studio album, a follow-up to her first album, “Pieces of You,” due in 2015.
As its tenor vocalist, Shawn Stockman has helped make the four-time Grammy-winning Boyz II Men the best-selling r&b group of all time. For the past two decades, Stockman and bandmates Nathan Morris and Wanya Morris (no relation) have been crafting classic albums whose appeal has withstood the test of time. Stockman’s smooth vocals have helped to give Boyz II Men’s timeless hits their signature sound. Boyz II Men has recently released a new album of original material titled “Collide,” which offers a new sound for the group.

Boyz II Men, which holds the record for longest running # 1 song in music history with “One Sweet Day,” just recently extended their Las Vegas residency at the Mirage Hotel & Casino.

Patrick Stump is the lead singer for Chicago-based Grammy-nominated rock band Fall Out Boy. The band’s first single, “Centuries,” from their forthcoming album for Island Records/DCD2, has become a multi-format radio smash, quickly charting in the top 10 on modern rock and now exploding on the Top 40 chart. The track debuted at #1 on the iTunes Alternative Chart and the song already has more than 20 million plays on Spotify and 3 million plays on YouTube in just three weeks. Fall Out Boy has also written the song “Immortals,” featured in the trailer and the film “Big Hero 6” from Disney.
The band’s 2013 release, “Save Rock and Roll,” was the musicians’ gold-certified fifth studio album and featured the multiplatinum hit “My Songs Know What You Did in the Dark (Light Em Up).” “Save Rock and Roll” debuted at #1 on Billboard’s Top 200 and #1 on iTunes in 27 countries when it was released in April.

Nick Lachey, a multi-platinum recording artist, actor and television personality first rose to stardom as the front-man of the popular band 98 Degrees, selling more than 10 million albums worldwide and charting several top-40 hits. Lachey later went onto star in “Newlyweds,” one of MTV’s most successful shows in the network’s history.

His fourth solo album, “Soundtrack of My Life,” is slated for release Nov. 11. In addition to his individual projects, Lachey reunited with 98 Degrees to announce a North America tour with New Kids on the Block and Boyz II Men.

In March, Lachey signed on to host VH1’s popular national morning show “Big Morning Buzz Live.” He is currently in production on a new A&E Network docuseries “Lachey’s Bar” that will follow brothers Nick and Drew Lachey as they open a bar in their hometown of Cincinnati, Ohio.

Last year’s “Sing-Off” champions Home Free saw their recent album release “Crazy Life” go to #1 on the country iTunes chart and #4 on the overall iTunes chart. They embarked on a 36-show tour in support of the album and have appeared on shows such as “Today” and “Fox and Friends.”

As another sign of the influence of “The Sing-Off,” Pentatonix have become a musical force since winning the third season. Since their debut in 2011, the quintet has released four EP’s and their first full-length holiday CD "That's Christmas To Me,", selling more than 600,000 copies combined with three of the releases debuting in the Top 10 on Billboard’s Top 200 chart. Having recently eclipsed 6.6 million subscribers and over 625 million cumulative views, the Pentatonix official YouTube page is currently the 13th most subscribed-to music channel, having surpassed the subscriber totals of both Avicii and Beyoncé.
“The Sing-Off” is produced by United Artists Media Group (a joint venture among MGM, Mark Burnett, Roma Downey and Hearst Corporation) along with Outlaw Entertainment and Sony Pictures Television.

To my sweet & sassy 7, I LOVE you more than you will ever know! Thank you for the continued love, laughs and strength you all give me. This little girl is lucky to have such amazing Aunties! -- @vanessalachey/Instagram

What's better than spending a Saturday at a baby shower? Why, nothing, of course. See, that was a trick question.
Unless you happen to be close personal friends with Vanessa and Nick Lachey, you probably weren't invited to the former's baby shower this past weekend. But, lucky for you, she shared photos of the blessed event on Instagram
Vanessa, looking radiant in a black and white dress, posed with seven of her friends. She captioned the photo, "To my sweet & sassy 7, I LOVE you more than you will ever know! Thank you for the continued love, laughs and strength you all give me. This little girl is lucky to have such amazing Aunties!"

Men of the Strip at the House of Blues 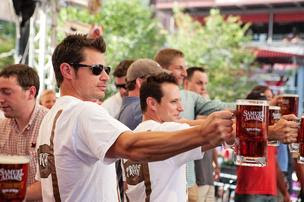 Lachey's Bar in Over-the-Rhine will open three months before the famous brothers'new A&E reality series is on air, the Enquirer reports.
Nick and Drew Lachey plan to open their new bar at Walnut and 12th streets in mid-December, and the show following its launch is expected to premiere in March.


Nick Lachey said the brothers have always dreamed of opening a bar and decided it was the right time to do so in Over-the-Rhine, where they attended the School for Creative and Performing Arts. They've partnered with 4EG, which owns Igby's and the Sandbar among other Cincinnati hotspots, to develop the 4,000-square-foot space and chronicled the journey on 10 half-hour episodes.

Q&A With 98 Degrees, Men Of The Strip’s Jeff Timmons


There are a few things that every girl growing up in the 90s loved.
Gel pens, Lisa Frank and Tamagotchis, to name a few.
But there was nothing they loved more than boy bands. Well, at least there was nothing I loved more.
So, when I was asked if I wanted to sit down with Jeff Timmons of 98 Degrees, I of course said ‘I Do!’
Timmons is best known for his band 98 Degrees, which came into popularity in the late 90s.
The group, comprised of Timmons, Nick Lachey, Drew Lachey and Justin Jeffre, performed from 1996 through 2003, and recently had a reunion tour with New Kids on the Block and Boyz II Men.


During the band’s hiatus Timmons expanded into different projects. Most notably, Men of the Strip.