A celebrity appearance by Nick Lachey at Safeco Field

The other VIP’s may not have familiar names yet, but they got a celebrity-style welcome. The 9 a.m. event also included an induction ceremony for the Full Sail University class of 2010 Hall of Fame, from GRAMMY winners to EMMY nominees.

An impressive crowd of Full Sail students showed up. They have some pressure to make a name for themselves, and celebs like Jeff Timmons (98 Degrees) want to help!

"I'm here till Wednesday. I'm going to be doing a presentation for Full Sail. I spoke here once before, " Timmons told me. He added, “"I think [Full Sail] is the biggest kept secret in the Entertainment business ... I'm trying to make myself a part of it as much as I can."

Go to Channel 300, Central Florida on Demand, to watch our entire interview with Timmons. Find out what his brand new “Soda Pop Project” is all about. Scroll to the Celebrity Interview section.

Let's Kick It For Kenya - A Concert Benefit with 98 Degrees Jeff Timmons and Friends (Official Video) from Jovy Janolo on Vimeo.

Let's Kick It For Kenya - "Empowering Women and Children through Soccer"

CHARITY CONCERT THAT BROUGHT TOGETHER PEOPLE IN THE SPORTS, FASHION, AND ENTERTAINMENT INDUSTRIES UNDER ONE ROOF...

Hollywood, CA – June 4, 2010, Jovy Janolo for My Fashion Place, together with Noone-N-Fenix event specialists, held a concert benefit at Eleven Nightclub in West Hollywood for Mama Na Dada’s Girl Soccer Team that was founded by actress and philanthropist, Meghan Noone. Meghan was joined by some of her celebrity friends all over the nation, including her teammates from Playboy Golf, to raise money for MamaNaDada.org – a non-profit, non-governmental organization formed by, and for African women to support the empowerment of the African girl child. The concert had the 90’s pop boy band 98 Degrees founding member, Jeff Timmons host and headline the show.

Jeff Timmons took center stage and sang “Emotional High” and “Turn You Out” (with rapper, Legend) from his new solo album. He then wooed the ladies when he surprisingly sang one of 98 Degrees hit singles, “Because
of You”, that also got everyone singing along. 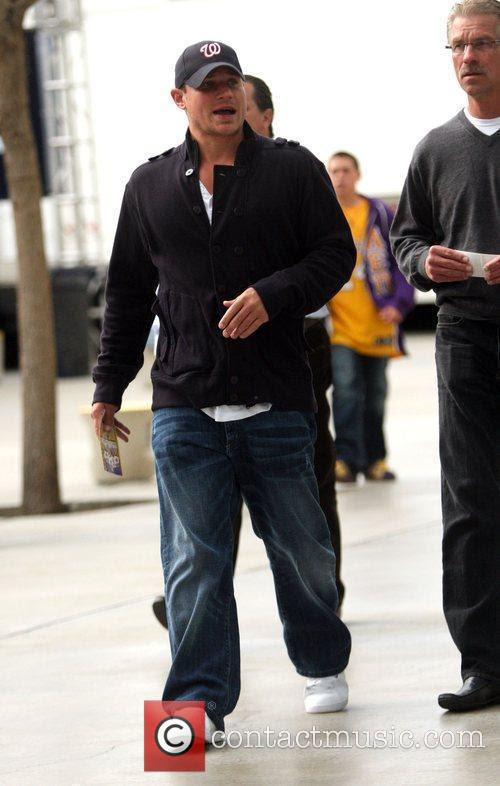 outside the Staples Center to watch the Phoenix Suns vs L.A. Lakers. Los Angeles, California - 27.05.10 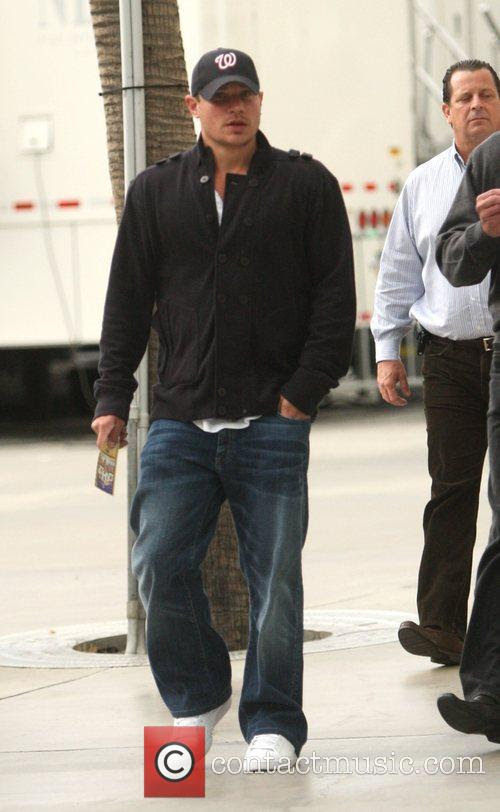 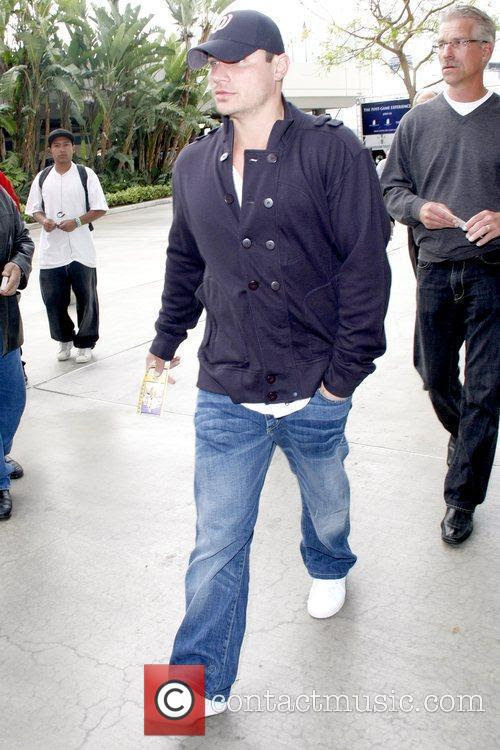 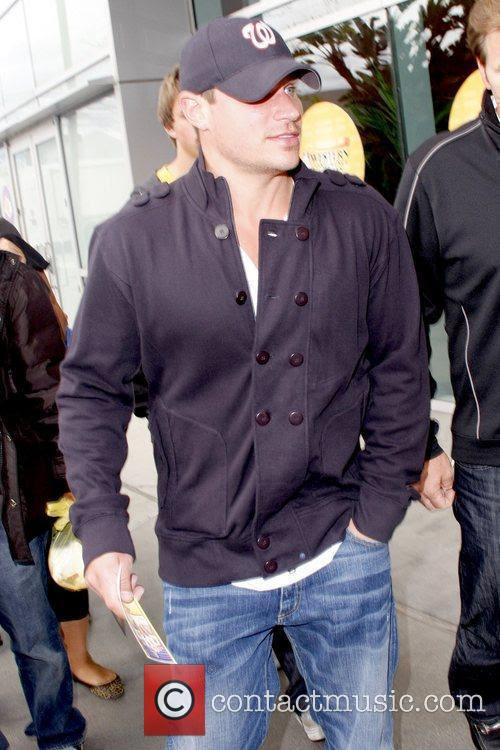 Nick Lachey was interviewed at the Reds game. He appears at minute 9:50 on the audio. [Download the audio at Baseballprospectus.com]

He is getting ready to host another season of the Sing-Off and is working on another album! Kenya Charity Event *Because of You* (JEFF)

Nick Lachey finally shaved off that overly-processed boy-bander hair! Yay! He looks pretty good, I think. Actually, he sort of looks brand-new. His eyes look brighter, and his head looks bigger. Do you think he cropped it short because he’s balding? It looks a bit thinner, but he’s still got a ways to go before he’s in Bruce Willis territory. Lachey claims he only shaved his precious highlighted boy-bander locks because he “just wanted a change.”

“I just wanted a change,” the former boy bander, 36, explained to UsMagazine.com. “I used to wear it short, and I have been in this business so long. and I got sick of it. I just decided to shave it.”

But it won’t be short for long.

“It’s slowly growing back!” Lachey told Us. The singer attended the fete with on-again girlfriend Vanessa Minnillo. Their summer plans?

“We are both working. I am doing True 2, and he has a single coming out in August,” Minnillo, 29, told Us. “In the middle of that, we are going to try and get away and take a mini summer vacation because why not? We are young, we don’t have kids, we like to travel and visit the family.”

Could their own kids be next?

“Of course, yeah,” Lachey told Us when asked if he wants to start a family one day. “Absolutely!”

For now, they are getting practice watching little bro Drew Lachey’s second child, Hudson, who was born on May 17. (Drew and his wife, Lea, also have a daughter Isabella, 4.)

“They don’t live in California anymore so we have to make an effort to go and visit them and see them, but when I’m there, I love to babysit!” Lachey told Us. “They don’t trust me very long with the new baby now.”

Minnillo tells Us she’d also like to see her beau on Glee. Admitted Lachey, “I’m not as avid an watcher as she is, but I went to a performing arts high school, so I always like to see the arts celebrated. It’s cool to see how popular that show is based on the kind of show it is.”

I really don’t understand what Nick’s hold-up is with getting hitched and having babies. It’s none of my business, but wasn’t that what he wanted when he was with Jessica Simpson? He wanted a traditional marriage and babies. And when they split, he walked right into another serious relationship with Vanessa, and yet… he seems reticent now. Once burned, twice shy? But good on him for changing up his look. Now he could pass for a dozen dudes a went to high-school with.

Oh no! He shaved off his luscious boy band hair! You like it? 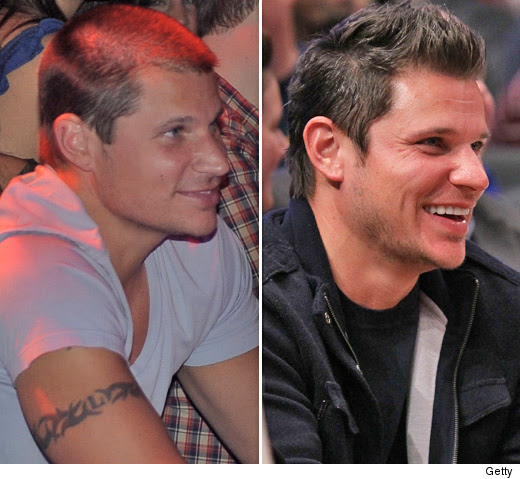