This is for the fans of Jeff Timmons who have grown to love him,and some who have had the pleasure of meeting him,we really love your new album,and we hope that you will continue traveling to see us and keep bringing smiles to our faces :))

Go HERE to sigh thanks.. And pass on the word!

WoW talk about a Blast from the Past!! I have the on VHS but its super Grainy!! Enjoy...

Jeff on Fox 5 News *My Atlanta*

Jeff Timmons was a founding member of the multi-platinum selling group 98 Degrees and hasn't slowed down at all since they broke up. He's been writing and producing music for himself and others like Jordan Knight.

VRE7.COM 98 Degrees founding member Jeff Timmons pays a visit to VRE7 to give a special message to the contestants of Cycle 2 in search for promotional models and a host for our next episode

When Nick, 36, was asked about the last time he lied, Ms. Minnillo offered to walk away – and he said “yes!” Get all the drama that you won’t see in the Kendra issue on newsstands now.

Last time you took a vacation?
Gosh. My birthday. We take a trip every year on our birthday. We both have the same birthday, so we kind of celebrate that by taking a trip. We relaxed. We went to an island to be determined or named later.

Last time you checked Facebook or Twitter?
I’m not really an avid Twitterer or Tweeter, and I don’t have a Facebook page. I’m not a very good new media person. I should get better.

Nick Lachey *Without You*

Thanks Shane @ Nick Fanatic for finding this

Jeff Timmons from 98 Degrees is coming to The Baub Show!

While at an event to stamp out hunger, stars such as Nick Lachey, Marcia Cross, and Debi Mazar sent their condolences to Marie Osmond and her family upon finding out about the tragic death of her teenage son Michael.

"Desperate Housewive"'s Marcia Cross, who holds a masters degree in psychology, said, "What's so devastating about that is, first of all, death is irrevocable, and you think, 'Oh my God, did they have medication? Was there something that could have been done?'...It's heartbreaking."

Actress Debi Mazar got to know the Osmond family while competing against Donny Osmond for the mirror ball trophy on "Dancing with the Stars." She knows many people who have suffered from depression, the condition Marie's son fell victim to, and said, "It's quite tragic. They're a very private family."

On Sunday night, Vanity Fair kicked off Campaign Hollywood, a week-long series of events leading up to their big Oscar Night Party, with a fundraiser benefiting The FEED Foundation and The Hungry in America Project. The "Entourage" star was present to speak about the solemn issue of hunger in America. As a child, she was afflicted by the topic, revealing to ET that "I was on food stamps when I was a kid...It made me more resourceful."

Nick Lachey and Vanessa Minnillo have taken a big step in their relationship: Adopting a dog together! At a party in Los Angeles honoring the new documentary Hungry in America Sunday night, Lachey told PEOPLE that he and his girlfriend adopted the pup earlier that day. “Now that I say it on record I’m going to have to keep him,” he joked.

The 1-year-old Siberian husky, named Kona, was on display at a roadside adoption event in Los Angeles. “I was driving down Ventura and we saw rescue dogs on the side of the road,” he explained. “Vanessa was with me — I don’t make those kind of decisions alone anymore — but since I grew up with a husky, I couldn’t resist.”

Calling huskies “independent” and “stubborn by nature,” Lachey said they’re harder dogs to train “because they can be aloof. They need a lot of exercise, but once you let them know that you’re the alpha male, they’re very loyal, great dogs.” The American Kennel Club calls the breed friendly, alert and intelligent, making the dogs “agreeable companions” for any family. 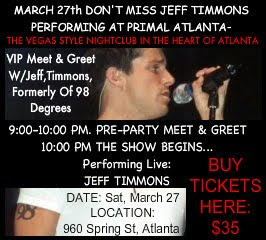 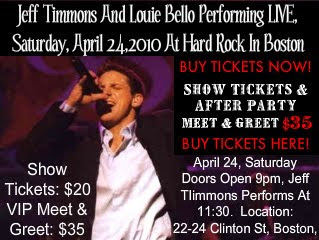 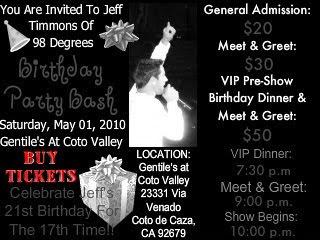 There has always been a link between celebrities and charitable causes, and earlier today (March 7) some of young Hollywood’s hottest stars were in San Juan, Puerto Rico for a very special cause.

Nick Lachey and Vanessa Minnillo were among the big names participating in the first annual Triathlon For Life, to benefit San Jorge Children’s Foundation.

Also breaking a sweat for the kids was super-hunky “Twilight” stud Kellan Lutz, who looked to be in good spirits as he smiled for the paparazzi.

Meanwhile, “90210” babe AnnaLynne McCord and “Without a Trace” hottie Roselyn Sanchez provided plenty of eye candy for the event.

Enjoy the pictures of the stars out for the first annual Triathlon for Life (March 7).

What is the best Valentine's Day gift? How about time with the founder of 98 degrees, Jeff Timmons! Join Scott and Jamia as they ask Jeff Timmons your questions live. ADD @scottandjamia on twitter and send all your questions via DM by 2/11/10-6pm eastern time. You DO NOT want to miss this show! The temperature is starting to rise!