Bon voyage!
Truth Be Told actress Vanessa Lachey and her husband, 98 Degrees star Nick Lachey, took to the friendly skies with their two children: son Camden, 3, and daughter Brooklyn, 16 months.
“Family Summer Vacation here we gooooooooooo!” Vanessa Instagrammed the image boarding their private jet.
Earlier this month, the proud mama shared a shot of her two children.
“#SundayFunday a rare moment of sibling happiness! All it took was a ranch with ponies, birthday cake, bandanas, face paint and a saddle riding barrel. Haha!!!” the actress, 35, wrote.

Nick Lachey on 98 Degrees, 'Newlyweds' and other nostalgia

Nick Lachey calls from the Bahamas where he’s taking some time off before he and the rest of 98 Degrees join Dream, Ryan Cabrera and O-Town for this summer's late '90s pop reunion, dubbed the My2k Tour. The now 42-year-old has since started a family with wife Vanessa Minnillo and settled nicely into the role of sometimes solo artist/reality TV regular/potential pot farm proprietor, should Ohio finally get it together. While no longer a full-time boy bander, Lachey says he and the guys have been looking for the right opportunity to tour again following 2013's Package tour with New Kids on the Block and Boyz II Men.
Now that the illusion of being an innocent boy band is lifted, is touring any different for you guys?
None of us are in the same place that we were [when we started] then and our fans are not in the same place they were then either. It’s fun to relive those moments from the '90s and 2000’s that represent special times in our lives because music takes you back. You hear a song again and it immediately takes you back to the place you were the first time you heard it or a special moment in your life. We’ve been really luck because a lot of our songs have been a part of peoples’ weddings and so on and so forth. That’s the cool part of a tour like this; it’s a chance to walk down memory lane.
“I Do” was such a big wedding song the year it came out. What’s it like knowing you were part of so many couples’ wedding days?
That’s someone’s most special day — that and the day your kids are born. Those should be the most important days of your life. There’s no greater honor than hearing that “I Do” was someone’s wedding song. You can’t get a bigger compliment than that.
You were such a big part of the early stages of reality TV with “Newlyweds,” and you’ve be able to stay within the medium throughout your career. Is there anything about that form of entertainment that keep you coming back?
The ironic thing about my first step into reality TV was that — not a lot of people know this — but “Newlyweds” was supposed to be a vehicle for [then wife Jessica Simpson] and I to promote our albums. We both had records that were coming out.  No one, including us, ever anticipated it becoming a hit and getting multiple seasons. So we got, kind of by accident, thrust into the reality TV world.
I think the cool thing about it is that it does give people a chance to get to know you and hopefully like you for who you are. I don’t know if there’s anything intentional about [my participation], but it’s been a part of my career and life since then. On the flip side, I think I learned a lot about [reality TV] and don’t think I would necessarily do that type of show again. [Laughs] But for better or worse it’s a part of my life, and you learn the good and the bad and the ugly from doing it.
Are there any plans for 98 Degrees to release new music?
We’re not doing any new music in terms of a new album, but we’ll be on a tour bus for eight weeks straight and you get the tendency to start writing when you get together. It’s the natural thing that happens. I’d be shocked if we didn’t come out of this with new music. But right now we’re focusing on getting the creative and staging of the tour worked out.
All these years later do you think you guys still have the moves?
Well some people would argue that we never had the moves, so we have nowhere to go but up!


Nick Lachey is using his voice to raise awareness about autism.
Earlier this month, the 42-year-old singer joined stars such as Bruno Mars, Holly Robinson Peete, Niecy Nash and Martin Lawrence for the Micah’s Voice“Back in the Day” 2nd Annual Benefit Concert in Woodland Hills, California
Lachey, who has spoken to ET before about the need for more autism research, was happy to attend the event, as his adopted brother, Zac, suffers from Asperger’s syndrome, a developmental disorder on the autism spectrum.
“It’s a disease we’re still trying to figure out, and make some sense of,” he said. “Nights like this raise great money to help try and do that.”
Peete also voiced her overwhelming love for Micah’s Voice. Her son, RJ, has autism, and she and her husband, Rodney Peete, formed a non-profit calledHollyRod Foundation in 1997 to provide care to those living with autism and Parkinson’s disease.
“I couldn’t wait to come out and support their [Micah’s Voice founders Shawn and Sharhonda Stockman] efforts,” she said. “Autism is the fastest growing developmental disorder in the world, and we need more and more and more awareness.”
Micah’s Voice is a non-profit foundation created by Boyz II Men singer Shawn Stockman and his wife, Sharhonda Stockman, to provide financial and community support for families affected by autism. One of the Stockman’s twin sons, Micah, was diagnosed with autism when he was younger.

98 Degrees: Who's (Literally) the Hottest Guy From the Band? Here's Your Answer.

First up was Drew, who came in at a strong 96.9 degrees

There were often two arguments constantly debated among teen girls in the 2000s—which boy band are you loyal to and who is the hottest member of the group.
So, in both an effort to give you an entertaining slap of nostalgia while also answering those die-hard questions, we bring you a clip with the fine gentleman of 98 Degrees. The singers sat down with E! News recently for an interview, but we couldn't let these lads go without finding out who really is the hottest member of the group.
Is it Nick Lachey? His brother Drew Lachey? Jeff Timmons?! Justin Jeffre?!
We needed answers, so we began investigating. Oh, and when we say "hottest," we're being completely literal. We actually gave each band member a thermometer to see who's temperature is closest to 98 degrees Fahrenheit.
C'mon, you didn't think we'd actually judge them by their looks, did you?

And he proved he was hotter than older brother Nick, who came in just below his sizzling sibling at 96.1 degrees.

However, Timmons blew both Lachey brothers out of the running when he came in at 97.7 degrees, taking the lead as the hottest 98 Degrees member.

But don't you dare rule out Jeffre. Just when you think you've crowned your victor, Justin's thermometer read a whopping 98.3 degrees.

Yep, we have a winner! Justin Jeffre is literally the hottest member of 98 Degrees. 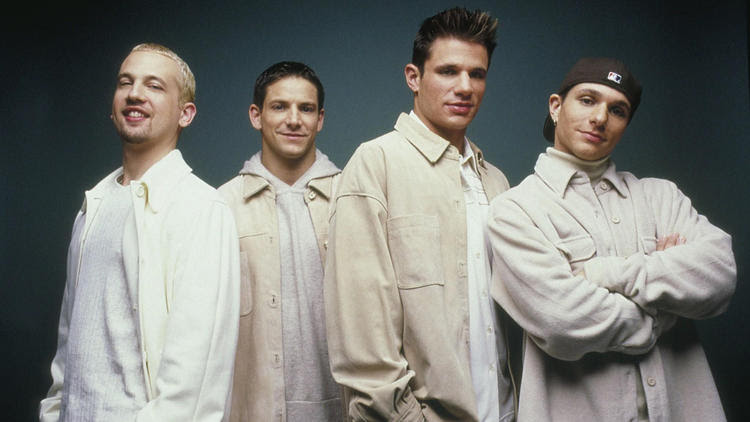 For pop music fans born in the late ’80s, there isn’t a summer more pivotal than 1999.
Boy band heartthrobs and pop princesses were all the rage. MTV’s “Total Request Live” was required after-school viewing. Nickelodeon even sponsored the first music festival catered to kids, headlined by boy band 98 Degrees.
Nearly two decades later, those same “kids” are still spending their money on music festivals -- but now with a nostalgic bent.
Nineties hip-hop label Bad Boy has launched a tour. Gwen Stefani and Eve will hit the road. Even boy band 98 Degrees is taking advantage of aughts fever this summer with a new outing.
“It seems like the nostalgia thing is becoming the in vogue way to tour these days,” said 98 Degrees’ Nick Lachey.
Lachey and 98 Degrees will top-line the My2K Tour, launching in July, which pairs them with former teen-dreams who once dominated “TRL,” including Ryan Cabrea, O-Town and Dream.
The 35-date tour stops in L.A. on Aug. 25 at the Microsoft Theater, where tickets range from $35 to $99.50.
“People really enjoy that era of music,” Lachey said of the ’90s and ’00s. “It was a feel-good time in music, and frankly, our country.”
Lachey said his group had been looking to go on the road since 2013’s Package tour — then their first in 12 years — which paired them with Boyz II Men and New Kids on the Block.
Bundling newly christened heritage acts together made the most sense, Lachey said, considering past success with the concept.
“Every summer, you see it. Guys like Def Leppard and Styx and all of these bands go out together,” he said.
Yet tours based on fond memories rather than current hits are no longer just the providence of boomers or Generation X. A recent report from the Pew Research Center, based on data from the U.S. Census Bureau, pegged millennials, defined as those ages 18 to 34 in 2015, as America’s largest generation at 75.4 million.
Millennials are all grown up, and it’s never too early, apparently, to start looking back.
“You’re seeing it in hip-hop, with Puffy and the Bad Boy tour,” Lachey said. “New Kids has done it in a smart way [recently] with Nelly and TLC last year and Backstreet Boys before that. So we thought what kind of bill could we put together for the summer to appeal to collective fan bases?
“For fans, its a chance to come back together  and take a walk down memory lane.”