So yeah Michelle, my ♥plutteh♥, and I saw Jeff Timmons (the cute guy from 98 degrees who is NOT Nick Lachey NOR Drew Lachey. You know the one, the one who isn't bald.) at some Traxx FM dinner-with-the-fans last Friday.

How did we manage to go? Sigh I don't want to tell you since I already got a lot of flak for listening to Traxx FM, which I do not understand at all, what the heck am I supposed to do when Hitz.fm, Mix FM, AND Fly FM ARE ALL PLAYING RIHANNA?!?!

The venue was actually the radio station headquarters itself, which was actually at this bitch of a place called Angkasapuri. YES near the train station. Which you would think is very easy to get to right, being near a train station and all?? NOOOO! It was terrible. Lucky I had managed to talk my mother into dropping us off there or we would never have found it. Heck, we would never have gone since on the way we hit this massive traffic jam and were about 40 minutes late when I really did say I didn't want to go anymore and meant it. But she told me it was okay and we were almost there. Getting there was only part of the trauma since the parking lot and dropping off area was like outside the main gate, instigating a something like 300m hike (hilly area) to the building itself.


So ok fine, you know, this is Jeff Timmons after all.. international superstar... where shall we have him eat with the fans and perform a few songs....

HEY I THINK RANDOM HALL AREA WILL DO!

(prepare yourself for the only picture in this post)

You see that fine-looking chair Michelle's finger is sorta-but-not-quite-pointing-at? It is one of those plain plastic chairs, my high school had them, random badminton courts have them, school halls like to use them. The kind with two large holes in the back, lovingly placed for whatever belongings you may place behind you while you sit down to drop out of. The tables were rickety wooden ones, it was hilarious.

As you can see we were sitting right to the stage. So close we could have stuck a hand out and pulled down his pants oh yes we could've! Do not doubt the mighty!

Jeff Timmons only sang something like 3-4 songs, so most of the time we talked to each other a lot, being very disrespectful. Making fun of this stuckup poser girl (who was very obviously not Chinese) in Chinese, making fun of fangirl, saying things like "HEY HELLO!!!!! NICK LACHEY!!!!!", "WHAT IS IT LIKE LIVING WITH JESSICA??" --to each other but not Jeff, because we are cowards etc.

eg.
[Jeff is going around our table shaking hands with everyone]
Jeff: hey were you here the last time I was in Malaysia? you look familiar.
Poser Girl: oh no I wasn't
Jeff: oh guess not.. I wish
Poser Girl: eheheheh

We also ate cheap Malay food and took lots of pictures after the show, randomly shoving my camera into each other's faces and snapping. Which I am too lazy to post.

Plut how could I have even considered going with someone else ♥ no one jokes with me like you do.

mIcheLLe also got some action with the man himself. !xobile! oo la la!

For more pictures that would not fit, please go here

These are not my photos nor do I claim to know anyone in them. Just sharing photos that i found from the other side of the world!

Jeff singing Sims style... how freakin cute is this??

The last time I saw Jeff Timmons and his fellow bandmates of 98 Degrees, it was almost 10 years ago at their album promo tour in Penang. I was at the second floor, crouched under someone’s legs just so I could take some shots of them with my old analog camera, which were not exactly the best pictures in the world either. Ah, those were the boyband crazed days. Admit it, you had one yourself too. It would be a total sham if you consider yourself a music fan without going through that phase no matter how short it was.

Fast forward to today, I have outgrown boy pop, as did the rest of my generation, though still enjoy it from time to time. And 98 Degrees have stopped being a band and gone on to do their individual projects, like most of the bands in their generation. The limelight was entirely on Nick Lachley and his publicised wedding life with Jessica Simpson, from the moment they said “I do” to the day they got a divorce. A little left from the spotlight, I never knew what Jeff Timmons was up to from the 98 Degrees hey days till now. So, when I found out TraXXFM was having a welcoming dinner for Jeff Timmons to join their road tour, the first question that popped into my head was, “Why the heck is he doing here?”

Meeting a musician is not really that fun and exciting unless it is someone you are really thrilled to be in the same room with. He may not be Ben Gibbard or Damien Rice, whom both I already have perfected questions dying to fire at them. I wanted to drill Jeff deep, give him a hard time with the whole boyband business, but alas, I did not have all the time in the world with him to ask him anything and everything. But as a journalist, it will always bring a sense of accomplishment in you when the interviewee patted your shoulder and said, “Great questions. Thanks for the interview.” Maybe he is being polite. Maybe he would take whatever attention he needs, seeing that he is not that popular anymore. But it is still a comforting sound for my part.

Here are some of the questions I have came up with. But my opinion on my own stuff means nothing but dirt at the bottom of the ditch. You be the judge.

Are we going to expect 98 Degrees to make a comeback anytime soon? It’s sort of a “now or never” thing. I mean, Backstreet Boys, Take That, Spice Girls and even NKOTB has done it. N Sync has always said they would do it but look at them now, they have broken up anyway. So, what is the verdict for 98 Degrees in this whole comeback business?
We’re definitely coming back. I can’t put a date on it yet, but we have been talking about it on and off. I mean, just last weekend, I was on the phone with Nick and we were talking about putting the band together again. And I don’t think we’re waiting too long for it, because we all have our own projects to work on, but we are hoping to get back into the studio together to make a new record.

Is there going to be a slight change in your music by then?
I think so. I mean, music changes everyday and we can’t really stick to the same stuff all the time.
(Ah well, not that I’m holding my breath: musicians say that all the time and in the end, it’s still the same sound)

You were in a recent reality TV show called Manband. It’s basically a combination of four “has-beens” band members - himself, Chris of N Sync, Bryan of Colour Me Badd and Rich of LFO - coming together to make a new band, Sureshot, and revive the boyband era. How did you think that work out for you guys as a band member?
Well, to be honest, not much really. I mean, the show did well, but for us as a band, it didn’t really do much changes. Sureshot hasn’t done anything since that TV show, and even in the show some parts have been edited. Besides, we all have our own bands to go back to, so I didn’t really expect we would come together and do something serious anyway.

Are you guys really that desperate to revive the “boyband” in you guys? Is “boyband” really that dead for you?
I don’t think boybands are dead. I mean, look at The Jonas Brothers. As long as there’s a young crowd out there looking for music like that, that genre will never be dead. But for us, I think it’s way over and we should move on. I mean, back when 98 Degrees were still together, we were not actually a boyband either. We were already an older crowd and I wouldn’t say we were doing boyband stuff either. (Oh yes, you would). We did mostly ballads. So, we’re definitely through with jumping out of balloons on stage and all that. 98 Degrees have never done that, so I don’t think we’ll be doing that anytime soon. 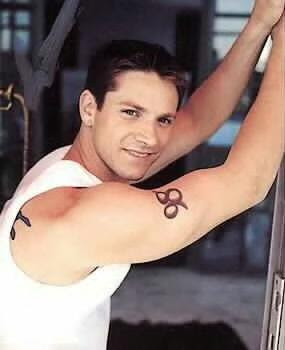 We got the invitation from Traxx.fm. I think most of us know who he is. He's from the former 98 degrees boy band group.

Before the party start 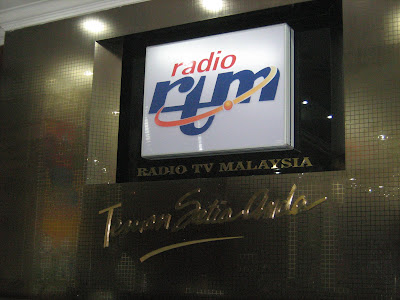 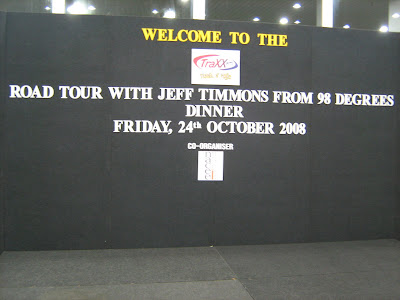 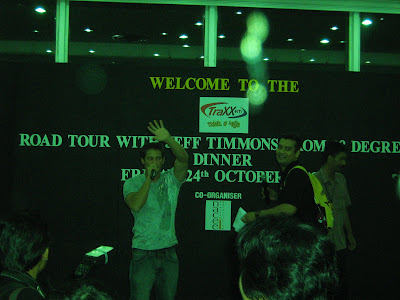 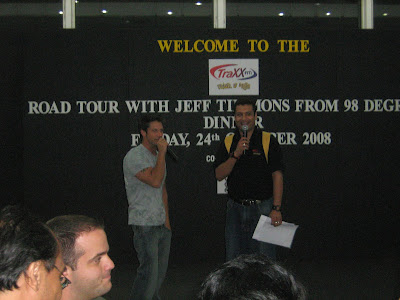 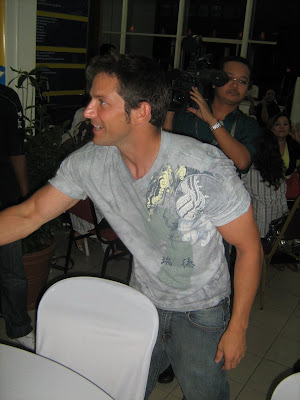 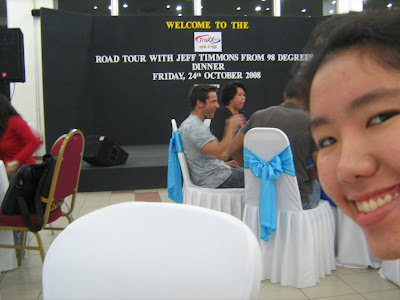 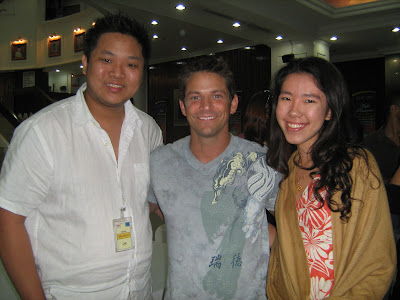 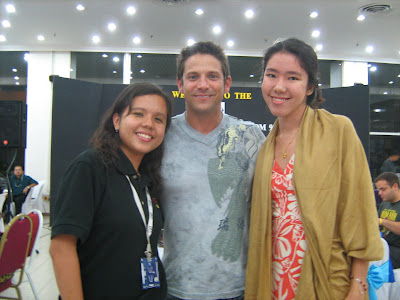