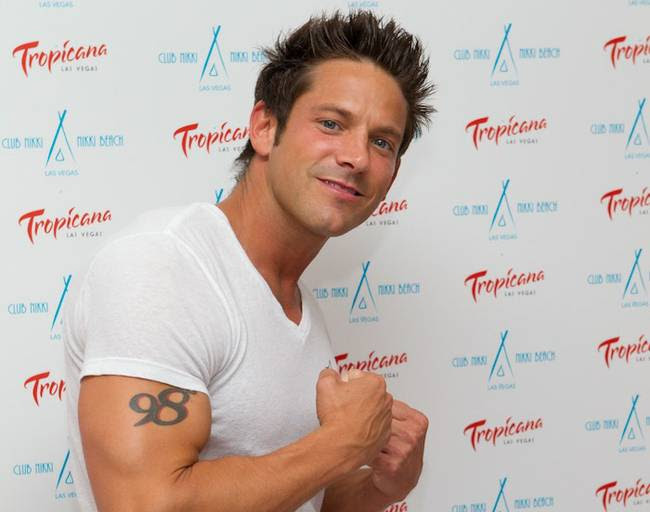 
When you have a 98 Degrees tattoo on your right biceps — as does Jeff Timmons — you are sort of beholden to the brand.
So it made sense that Timmons has been eager to reunite the 1990s boy band — or rather, formerboy band — for an appearance on the “Today” show last Friday and a spot on the bill at last weekend’s “MixTape Festival” in Hershey, Pa. It was the first live performance by the 98 Degrees in 11 years, and their set closed the two-day festival at Hersheypark Stadium.
Others on the nostalgia-tinged bill were Backstreet Boys, New Kids on the Block, the Dan Band and LL Cool J. Kelly Clarkson, the Fray, the Wanted, DJ Pauly D, Carly Rae Jepson and Steel Panther (presumably to instill a sense of stability to the two-day event) also performed.
But the long-awaited reunion of 98 Degrees, in the works for more than two years, was the most-anticipated performance.
“We had the opportunity to do this really big festival, and also the ‘Today’ show, the biggest show on morning TV, so we agreed to do it. Aside from the iHeart Music Festival, who knows if there is going to be another megashow like this for us to perform?”
Timmons has returned to game-plan his career in Las Vegas. He has moved his family to Summerlin, and is coming off a summer-long club show at Ovation at Green Valley Ranch. The interactive, put-your-hands-in-the-air production “Wired” forged an atmosphere of fun, but Timmons is seeking a stronger show somewhere on the Strip.
“We tried it at GVR and saw that the show could work, but it was off the Strip and it’s a different kind of casino, for locals,” Timmons said. “My demographic skews younger.”
Timmons has been in talks with someone who can help make that happen, Las Vegas producer Adam Steck of SPI Entertainment. This year, Steck teamed with Mike Tyson to take Tyson’s “Undisputed Truth” autobiographical one-man show from MGM Grand’s Hollywood Theatre to Broadway.
“Adam is somebody I’m really talking with, a lot,” Timmons said last week, before heading off to appear on “Today” in New York. “He’s great. We’ve talked about doing everything from a male revue brand to revamping a variety show, maybe bringing the show I just did at GVR to the Strip.”
Timmons’ connection to male revues stems from his appearance in “Chippendales” at the Rio in the spring and summer of 2011. On Saturday, he’s performing two songs during the AFAN Black & White Party at the Hard Rock Hotel’s Nirvana Pool.
An adept marketer who is at once chatty and smart in public appearances, Timmons had a successful run with the Chipps and has gained a grip on what it feels like to live in Vegas, where it isn’t always 98 degrees.