Dancing with the Stars: Drew Lachey Predicts He & Joey Fatone Will Be Rivals 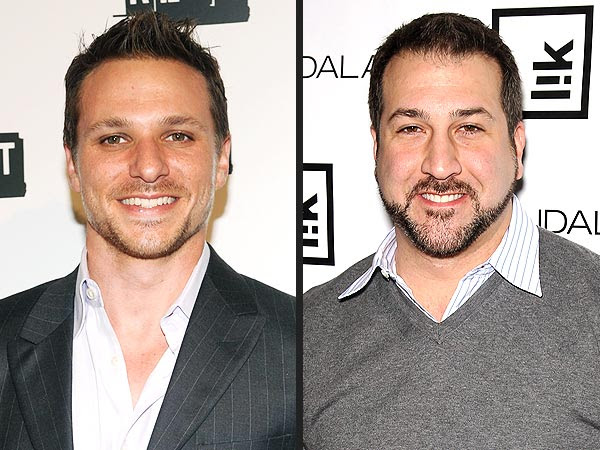 The all-star season of Dancing with the Starsdoesn't start until Sept. 24, but contestant Drew Lachey is wasting no time in sizing up the competition.
"Everyone on the show is very competitive," he tells PEOPLE. "Everyone's laughing and like, 'Oh, haha, this is going to be fun,' but I guarantee once the show starts up, you're going to see everybody's true colors come out."
One of the people the 98 Degrees band mate, 36, sees as a direct rival – on the dance floor, that is – is former 'NSYNC singer Joey Fatone, 35.
"I think there's a bit of a competitive streak between Joey Fatone and myself," Lachey says, jokingly. "We're good friends and we go back a long way. But the smack-talk is already starting with the boy band competition thing."
Other notable threats, he says, are Shawn Johnson, who is "very athletic and very strong," and Gilles Marini, who he believes is the face of the Argentine tango.
Lachey, who calls the whole DWTS experience "almost like a political campaign," doesn't have any tactic to winning except being a "what you see is what you get" kind of guy.
"If they like me on the dance floor and they like who I am, then please vote for me," he says. "If there's someone else they relate to more, then they're going to vote for them. In season 2, we didn't have Facebook. We didn't have Twitter. It was just more of how your dancing was, and how people connected to you as a performer and as a contestant on the show. So I'm going into it with the same kind of mentality."
Partnered with Anna Trebunskaya this time around, as opposed to his mirror ball trophy-winning mate Cheryl Burke, Lachey says, "I think it's going to be a whole lot of fun because I get a whole new bag of tricks, basically. For people who have the same partner, they're going to use the same techniques and do the same style and teaching method."
With another season of Dancing on its way, along with charity work (he and his wife Lea started the Cincinnati-area Lachey Arts Music Theater Camp) and a reunion with his boy band, Lachey's got his hands full. But nothing, he says, compares to that of his brother Nick Lachey, who is expecting his first child with wife Vanessa Lachey in September.
"He may not know it, but he should be more overwhelmed [than I am]," Drew says. "A kid coming is a whole different thing. That trumps everything. Hands down, he's probably got more stress and more on his shoulders than I do, just because of the impending birth. We're both juggling a lot right now. I'm very happy for him."