Nick Lachey: Why I Want Another Son – and Then a Daughter 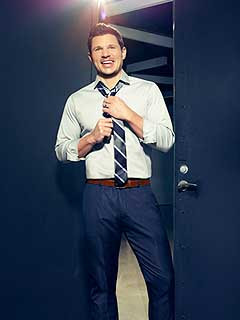 No pressure Vanessa, but Nick Lachey already has the next two kids all planned out.
Of course he’s completely smitten with the couple’s 17-month-old son, Camden John, but Lachey admits he is starting to get the itch.
“I do want a girl,” he told PEOPLE in New York’s Times Square while promoting his new job as host of VH1′s talk show, Big Morning Buzz.
“I think there’s something emotional about having a daughter that I definitely want to experience.”
But on second thought, “Maybe I’ll get one more boy under my belt first,” he says with a laugh. “I’ll need some help to keep her in line, so a couple of brothers couldn’t hurt.”
As for future big brother Camden, Lachey, 40, says he’s in the copy cat phase. “He’s a sponge, a regurgitating sponge! If he hears something, he’ll repeat it 10 times,” the doting dad shares.
And he had a major milestone recently. “He just had his first haircut actually. He has super long hair, and we just let it grow, but it got so long he kept pulling it into his mouth,” says Lachey. “It was out of control.”
Now the tot “has a little part to the side and looks like a tiny school boy.”
The whole family is moving to the Big Apple for Lachey’s new hosting gig.
“We love the city, but we’ve never done it with a young kid,” he explains. “It’s intense when you think about getting your kids in and out of cabs and the traffic. You always have to be careful as a parent, but in New York it’s even more so. But people do it every day, it’ll be fun.”
Lachey says Camden will for sure make a cameo on the Big Morning Buzz.
As for his dream guest? “If my fellow Cincinnati boy, George Clooney, ever decides to grace us with his presence that would be the pinnacle for me,” he says.