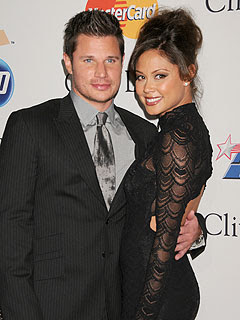 They got engaged in November, but Vanessa Minnillo says that she and fiancé Nick Lachey still haven't set a date for their wedding.

"It's just because of our work schedules," the TV personality tells PEOPLE. "For us, work is important. It's our creative outlet, it's what keeps us going, it keeps us busy, and we want to be sure that we work around that."

And while she had previously thought she didn't want a winter wedding, she recently began to reconsider that assumption "[I saw] a wedding booklet about the Ritz-Carlton weddings that they do and it was a winter theme and it was beautiful," she said. "Something about winter, it's one of my favorite seasons, it's very romantic. The twinkle lights and the greenery and the snow. So that taught me I need to be more open-minded. We'll figure it out."

But one thing is for sure: Minnillo, 30, and Lachey, 37, are not stressed out about their wedding plans. "We're easy, that's what I love about it," she says. "Neither of us are letting it dictate our lives. We're gonna let it go with the flow... and I have faith in the team that we put together to make it as seamless as possible."

And she certainly has her hands full for now. In addition to trying out for different TV pilots, she's also waiting to hear back about a hosting opportunity. Plus, Minnillo is involved with an initiative called Girlfriends for Folate, which encourages women of reproductive age to make sure they're consuming enough folic acid to ensure the health of their children.

"I turned 30 and I got engaged and [I] started really thinking about the next chapter," she says. "One of those is family."

Minnillo "can't wait" to be a mom, but is hesitant to say for sure how many kids she hopes to have. "Ideally, I would love to have three or four, but ask me after the first one!" she says with a laugh. "Ultimately, I just want them to be healthy."

For now, she's enjoying life at home with Lachey and their 3-year-old Yorkiepoo, Wookie. And while they've worked out routines despite their busy schedules (she goes to the supermarket and cooks, while he unloads the groceries and cleans the kitchen), Minnillo admits they still have to work at their relationship.

"No two people are the same or no two people are completely different," she explains. "We understand that it's a growing process so we're willing to accept that and go with it as opposed to saying, this is how it's gonna be. We know that there [will be] some curveballs."