Nick Lachey and fiancée Vanessa Minnillo raided the dressing up box and turned back time for a retro Hollywood fancy dress party.

Singer Lachey went for a Seventies style with an Afro wig and a garish ensemble of an open red shirt teamed with purple trousers, complete with white shoes and belt. 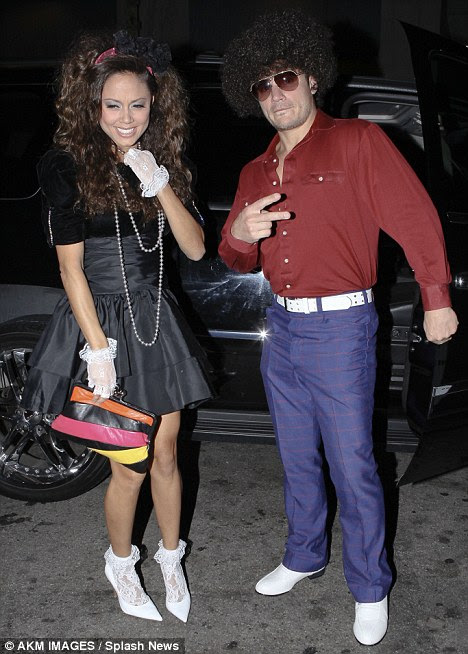 Retro style: Nick Lachey sported a Seventies-style Afro while his fiancée Vanessa Minnillo was an Eighties throwback as they attended a Hollywood party last night

And the 30-year-old appeared to have given her curled locks a boost with some hair extension to create a throwback, voluminous style.

The newly-engaged couple looked looked in a very cheerful mood as they arrived at Beso in Los Angeles on Saturday night.

They were there to celebrate Vanessa's best friend's birthday party, Jenn Birmingham Lee. 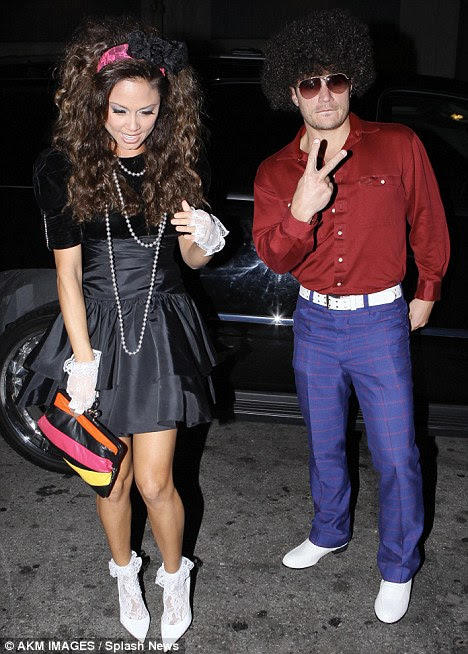 Saturday Night Fever: The newly-engaged couple looked in high spirits as they arrived at Beso where they were celebrating Vanessa's friend's birthday

Check us out: Vanessa wore a short black dress, teamed with pointy shoes, while Nick went for a garish ensemble of purple trousers and an open red shirt

Earlier in the night Vanessa tweeted: 'Getting ready for my bestie's bday party. Nick is going 70's & I'm "totally 80's.'

Their night out comes following Nick's specially-written song made its debut during the Big East tournament championship at Madison Square Garden in New York last week.

Titled Last One Standing, 37-year-old Lachey said of the track: 'My two biggest passions probably in life are sports and music, so for me it was a good opportunity to marry both in this song.'

'I think the Big East conference is the best in the country, especially this year. I think we're going to break a record for the most teams sent to the NCAA tournament this year,' added the avid Cincinnati Bearcats fan.

Nick, the ex-husband of Jessica Simpson, announced last November that he is set to marry Minnillo, who he has been dating on and off since 2006.

'We're excited and incredibly happy about our engagement and we look forward to a wonderful future together,' the couple said in joint statement to America's Us Magazine at the time.