Nick Lachey: Will Sing for Sports, but Why Not His Own Wedding? 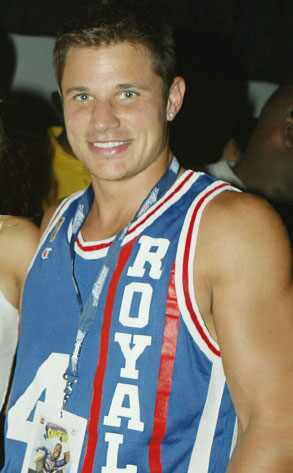 Nick Lachey is such a die-hard sports fan that he's now making music inspired by basketball.

I kid you not.

Earlier today, the former reality television star debuted "Last One Standing," the new anthem he wrote and recorded for the Big East Conference. ESPN will begin playing the song tomorrow night during its coverage of the NCAA tournament.

So is the pressure now on to write a wedding song for himself and fiancée Vanessa Minnillo? Read on to find out what Lachey just told me.

How did this all come about?
I had the concept for this song in my head for a while. I'm good friends with the commissioner of the Big East [John Marinatto] and he mentioned to me they were looking for some kind of fight song, an anthem. So I went into the studio a couple weeks ago and wrote it.

Maybe the contestants on The Sing-Off could sing it, too.
That would be cool, man. Now you're starting to think outside the box. I like that. I'll have to put that out there to [executive producer] Joel Gallen and see what he thinks of that.

So is the pressure on for you now to write a wedding song for you and Vanessa?
Now you're really getting crazy. But that's one moment where I think it's good to step away from it. It's like, you don't want to perform at your own wedding. You know what I mean? You let other people do that. You enjoy the day. So no, I think I'll leave the weddings songs to somebody else.

How's the wedding plan coming along?
You know what? We haven't put the pressure on ourselves to have it done by a certain time. We're obviously enjoying the process, and it is a busy time of year between pilot season and everything going on. I don't think we feel the pressure to get it done next week, but we're definitely excited about it and we're making headway.