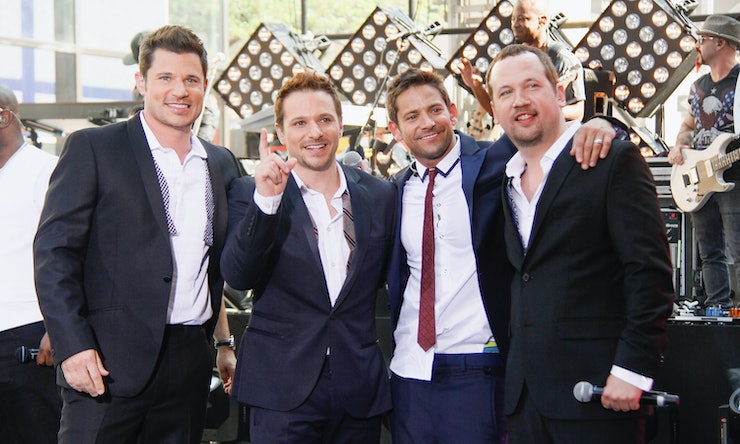 After the turbulent year 2017 has been, it's incredibly easy to reminisce about simpler, more comforting times, especially when the brunt of worries were copping the new 98 Degrees album on the day of release. But 98 Degrees in 2017 is a much different animal than they were in 1997. Back then, they covered everything — pop ballads, dance hits, and sultry R&B-tinged harmonies. While *NSYNC and Backstreet Boys weren’t entirely wholesome, they weren’t sexyper se. And for any hormone-addled teen, seeing a group of cornfed, shirtless, tribal tattooed guys singing about romance was a guarantee to sell albums at a local Sam Goody and to plaster dozens of said shirtless photos all over your bedroom and locker walls.
Nick and Drew Lachey, Jeff Timmons, and Justin Jeffre certainly had to grin and bear the days of their Tiger Beat photoshoots. “There was one I remember in Australia where the photographer said, 'Can you guys all crawl into bed together?'" Justin Jeffre reminisces as the band relaxes in the green room at The Music Box at the Borgata in Atlantic City, a few hours before their show, a stop on the “At Christmas” tour. They're all dressed casually, with the exception of Drew who has a grey scarf wrapped around his throat since he's currently battling a cold. As we chat at a low table, they pass around swag to sign for the Meet and Greeters who'll they'll be seeing soon. In the tradition of boy band shoots at the time, 98 Degrees were shirtless, and the photographer asked them to all get under the covers — together and shirtless. “We said 'yes' to pretty much everything but that one, we were like, 'Nah,'" Nick Lachey says with a laugh.
The Music Box is filled with fans of 98 Degrees — some who've seen the band hundreds of times and others seeing a favorite boy band for the first time twenty years later than they should have. The band is a little older, but they almost look the same as they did in 1997, with only slight bits of age creeping at the corners of eyes or the hint of silver at a temple. In the theater, there’s an instant holiday feeling, with fans bedecked in Santa hats, ugly Christmas sweaters and many, many sequins. Groups of women, clearly on a night out, are dancing and screaming along to the band's hits. Couples who clearly don't know what they were in for discreetly shuffle out and don't return.
The guys in their matching, simple suits perfectly harmonize classic Christmas carols while gliding, in sync, across the winter wonderland they’ve created to adoring fans. With shimmering lights, sparkling Christmas trees and big, cut-out snowflakes dangling from the ceiling. The result is simple and a tiny bit theatrical — like an upscale Christmas pageant. And the minute the guys break into “Because of You,” “I Do,” and a rendition of “Give Me Just One More Night (Una Noche)” into “Feliz Navidad” people start screaming. Fans, who still twenty years later, paid for Meet and Greets to get a picture with Nick, Drew, Jeff, and Justin, were wrapped around outside the theater, hours before the show began.
That’s much of the same pull that 98 Degrees held when they released their debut album in 1997, twenty years ago. After “True to Your Heart" (which was featured in Disney’s Mulan) and their second album 98 Degrees and Rising (which featured singles like “Because of You” and “The Hardest Thing"), the guys became a bonafide hit on the Billboard charts and with screeching teens everywhere. All of the guys are from Ohio, a place that they credit for keeping them sane during their early days of fame — which were filled with number one singles, Jessica Simpson, world tours, MTV, and screaming fans.
“You never forget your roots, especially in a crazy business like this. Not to be corny, but to stay true to ourselves and be thankful and express gratitude, those are the things that have been the foundation of this group, along with hard work. Ohio's a big part of that,” Timmons says. Releasing this new Christmas album, Let It Snow, makes the guys particularly reflective about their long career.
After the popularity of their first two albums, 98 Degrees released a holiday album, This Christmas, in 1999, which had a hit single in “This Gift,” which broke on the top 40 charts. With a Christmas album as their third album and with the 20th anniversary of their first hitting in 2017, doing another Christmas one felt appropriate for the guys to celebrate their career. “It is our 20th anniversary, so we wanted to do something to mark that milestone. Part two of that is we are so proud of the first Christmas album. We feel like we really came to our own musically [with it]. It's this timeless compilation of great songs we all really love and are attached to so we figured let's give that another shot in trying to even top that one," Nick echoes. 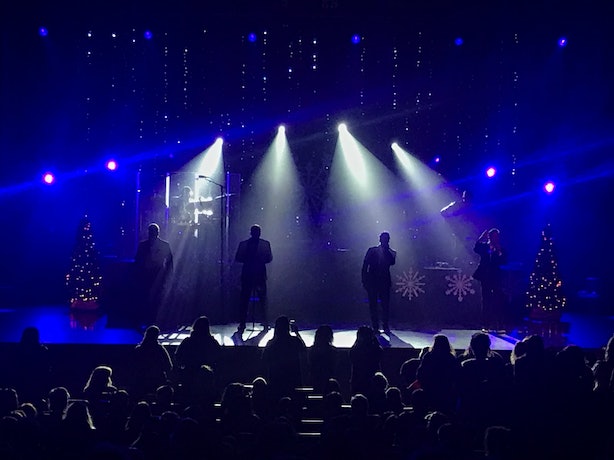