Talk about a Flashback Friday!
Nick Lachey shared a hilarious photo from his boy band days in 98 Degrees on Instagram Friday. “Found this on an article titled ’25 boy band shoots that went horribly wrong.’ Do you think it was the leopard print chair or the overalls?” the singer asked his over 500,000 followers.
The ever-so ’90s ensemble is a stark contrast to Lachey’s present-day wardrobe – except perhaps for his sequined outfits from his season on Dancing with the Starsmonths ago when he competed on the ABC dancing competition with his wife Vanessa Lachey.
In August, Lachey paid tribute to his boy band roots by mimicking an old photoshoot of himself showing off his sun tattoo with an A+ caption: “How hot is it? Hell if I know, but it sure is sunny.”
And this year, the boy band celebrated the 20th anniversary of their debut album and revisited their Christmas record by creating a Volume Two titled Let It Snow, which was released in October. 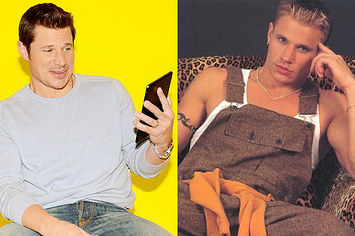 During their two decades in the music business, Nick and band members Drew Lachey, Jeff Timmons and Justin Jeffre harmonized in matching looks, some of which the foursome regret wearing.
“Every time something happens, it reminds you of something else that happened you know 18 years ago or a situation or a photographer. There’s constant reminders and constant cringing of bad pictures and bad fashion and bad hair,” Nick told Bustle.