The guys of 98 Degrees are back and dishing to ET about how times have changed in the 20-plus years that they've been a boy band.
Nick and Drew Lachey, Justin Jeffre and Jeff Timmons all took the stage for a special performance at the Borgata Hotel Casino and Spa in Atlantic City, New Jersey, on Saturday night. Ahead of the concert, fans lined up outside the venue in festive attire in anticipation to see the heartthrobs sing some of their classic tunes as well as tracks from their new Christmas album, Let It Snow.
The pop stars opened up to ET about their avid fan base and some of the gifts that have made them blush over the years, especially before social media. 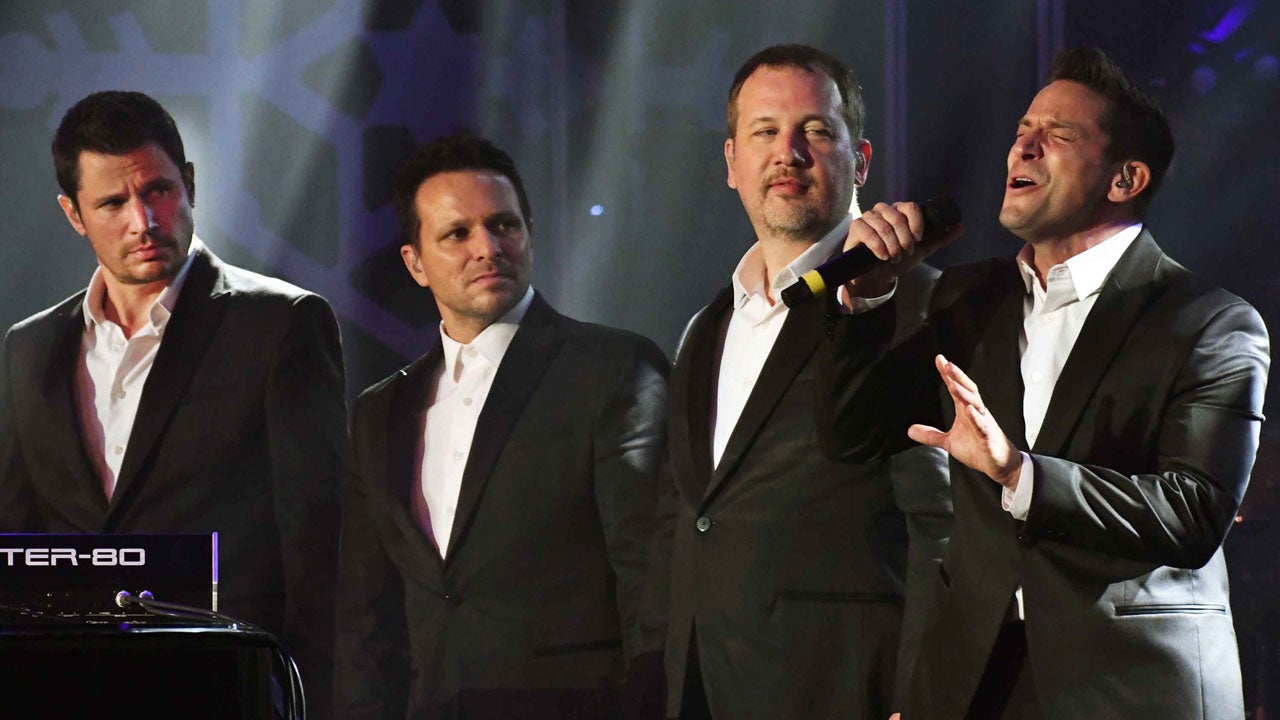 A fan gave us a flask the other day for our 20th anniversary," Jeff said excitedly. Nick quipped, "The best gift we've probably ever received."
As for the presents that have taken them aback, Jeff recalled, "We've signed a diaper before, a baby's diaper."
Nick chimed in, "For me, we were in Asia and this girl came up and gave me acne medication. ...It really cleared me up!"
Drew remembered a time when the group would receive some gifts that were not so family friendly!
"There was a time when fan mail would go to a P.O. Box and we had girls send, like, naked pictures there," he shared. "They didn't realize that our grandmother was the one that she was the one that opened the envelopes. So, it was like our mom and our grandmother opening up these envelopes that pictures of these naked [women] in them. It's crazy."
Nick joked to his brother, "Mom forwarded them onto me!"
Years later with eight kids between them -- Nick has three, Drew has two and Jeff has three -- the men of 98 Degrees are definitely more family oriented. During Saturday's show, Jeff even brought his youngest daughter, Ariahuna, onstage to celebrate her birthday.
Each dad shared with ET the first 98 Degrees song they ever played for their kids, with Jeff noting that his oldest daughter, Alyssa, was first introduced to their music when she had a cameo in their 2000 music video for their song, "My Everything." He also gushed that Ariahuna "knows every word" of their Let It Snow album.
Meanwhile, in Nick and wife Vanessa Lachey's family, they jam out to a '90s tune from the boy band. "For my kids, it was 'Because of You,' which they call the 'Sunshine Song,'" Nick said. "It's a little more upbeat, it's fun and they like to it while they swing on the swing set."
As for Drew, his 7-year-old son, Hudson, was first introduced to his dad's music when he saw them perform on the road a few years back. "They like to hear the ones that they can pick out my voice on," he noted.
The guys are now back on tour after Nick recently wrapped up his stint on Dancing With the Stars, and while he didn't win, his bandmates say he's better for it. "A lot more humble," Justin joked.
"I think, if anything, it was a new experience and you learn from every experience you do -- good, bad, or ugly," Drew, 41, said of his older brother. "It's just one more thing he can check off the list."
Nick, 44, insisted, "This may come as a shock to people, I did not go into this expecting to win. So, it wasn't this grand disappointment when it didn't happen, because I know I'm not a very good dancer."
Regardless, Nick had the support of his fellow boy band members, who were adamant that they "of course" voted for him while he was competing on the show.
It's certainly been a busy year for 98 Degrees, and they're only just getting started. "We're back home just in time for Santa to come," Drew said, noting that they have shows up until Christmas Eve. "We have little kids, so we're definitely in the thick of Santa Claus."
For more with 98 Degrees, check out another exclusive interview where they reflect on the debut of their first album 20 years ago.