Strippers Turn It Up To 98 Degrees


So a pop singer, a jock, two thespians, a couple dancers, a fitness trainer, an ex-porn star and a radiology technologist walk into a bar. It's not a joke. It's "Men of the Strip," the male revue tour featuring veteran entertainer and boy bander Jeff Timmons of 98 degrees that lands in metro Detroit on Nov. 14 at the Magic Bag in Ferndale.

"It's double entendre," says Timmons. "It's men of the strip, which is obviously the strip in Las Vegas. But it's also 'men of the strip' in that they take some of their clothes off and dance. When you hear about a male revue, you think about guys grinding their pelvises in girls faces with no clothes on, as opposed to the creative elements, which are creating scenarios, having great music and choreography. It's more about the sexiness."
A shirtless Timmons donned the famous Chippendales bow tie for his stint with the Las Vegas revue in 2011. After seeing the success of the film "Magic Mike" and his own performance in a strip tease, Timmons partnered with gay celebrity choreographer Glenn Douglas Packard to bring what he calls a "hipper and more modern" version of the performance style.

Timmons says his most important task was to create a fantasy and put on a good tease.

"What I noticed when I was doing the Chippendales, is that girls found the least sexy part (to be) when guys actually stripped down to their bikinis," says Timmons. "I think the scenario parts and the audience participation were the great parts of the show, and got the most reaction."

For the revue, Timmons will host and sing, leaving the muscle flexing to the other guys. He will be sharing new songs from an upcoming solo album, as well as some 98 Degrees faves.
And as one of the founding members of the band, Timmons knows what it takes to turn up the heat. But when it came time to choose the hot-bodied leading men for his revue, he left the task up to the professionals - the gays.


"I am not the best at doing that," he laughs. "Glenn has the eye for that kind of stuff. He knows what guys like, what girls like. What types of personalities. What types of looks. I don't know what I am doing, so of course I picked all the wrong guys."
Hundreds of guys judged by their brains, brawn and um, assets were narrowed down to eight after casting calls in New York, Los Angeles, Miami and Las Vegas.

"(Glenn) was able to pen it down to eight guys that he thought would not only be good-looking but all really charismatic guys as well. He came in to work with these guys who look like bodybuilders. He literally had them in tears," says Timmons. "Some of the guys are seasoned veterans. We have one of the guys, he comes from a family of preachers and they think he is coming out to do a different kind of show. Another guy is putting himself through school. Another guy has a girlfriend who doesn't want him to do it. Another is going through a divorce. We have a collection of guys and we see how they mesh together throughout the process."

We smell a good reality show. He agrees: "A bunch of Type-A, whipped-up guys - they all have very distinct personalities and all are entertainers. That's when the decision was made (to) do the TV show. We gotta put these guys in the house together," says Timmons. The reality show follows the performers as they coordinate their residency in Las Vegas. It tentatively starts shooting later this year.

Meanwhile, Timmons managed to get all the performers to stay under the same roof for their Men of the Strip calendar shoot, which features a behind-the-scenes look at the process online that includes lots and lots of muscles.
Timmons notes, "We're going to take this genre to a different level."
Hot in here, isn't it?
Men of the Strip
8 p.m. Nov. 14
The Magic Bag
22920 Woodward Ave., Ferndale
http://www.themagicbag.com 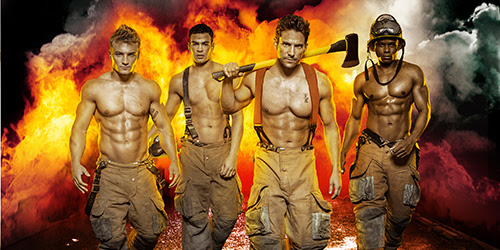