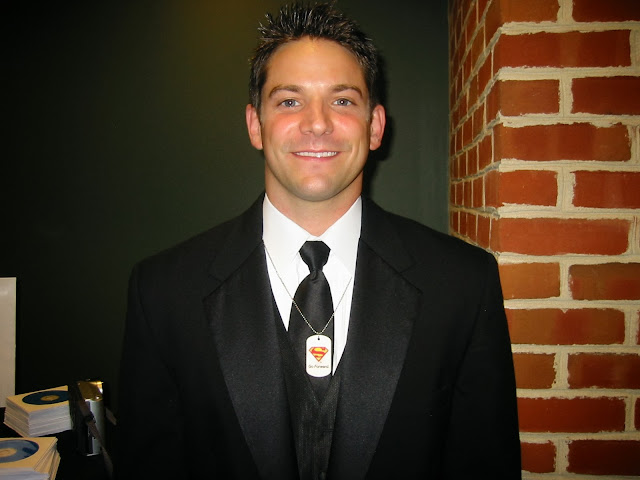 Having recently reunited with his mega-popular Grammy nominated pop collective 98 Degrees after a nearly thirteen year hiatus, founding member, and respected soloist, Jeffrey Timmons, a loving husband and proud father of four, has a whole lot to be grateful for.


The Hype Magazine recently tracked down the singer/producer in Las Vegas, Nevada, where the 40 year old Taurus was feverishly gearing up for the launch of his brand new all-male musical revue, Men of the Strip...

What prompted you all -- Nick & Drew Lachey, Justin Jeffre and yourself -- to finally come back together for a group reunion LP?
We just felt like it was the right time. We had been talking about doing it for years, but our schedules just didn't align. And, with the success for NKOTB and BSB, and the emergence of new "boy bands," we felt the demand was there for us and our fans were waiting.

You titled the record "2.0" -- Conceptually, what does this name represent both to and for you all?

Well, it is sort of a rebirth of our group, a second, more contemporary version of the band.  We've been gone for 12 years, so the added bells and whistles to the album production, and how we've matured as performers and artists individually, led us to that title.

How does 2.0 either differ and/or compare to previous 98* efforts?

It was put together much faster.  We recorded this album in less than two months, and most of the others took at least a year -- Technology!

You all just came off of The Package Tour, alongside both New Kids On The Block and Boyz II Men -- Overall, how was that whole experience for you all?
The best experience of my career.  I got to tour with my idols; Boyz II Men and the legends NKOTB! It was like a dream come true.  The bonus was that I got to have my family on the road with me the whole time.  I felt very blessed.

Do you have any memorable/funny stories and/or anecdotes that took place during this two-plus month run?

There were lots of them, but I hitched a ride on Justin's bus one night because we were going into Canada and all the buses couldn't go. I had been used to sleeping in a bedroom in the back of my bus, but on Justin's bus I slept in the top bunk that night.  I'm a restless sleeper.  In fact, I hardly sleep at all. So, I was tossing and turning and fell out of the top bunk and slammed my face and my shoulder on the ground.  I still have a third degree separation --  I think it's funny!

Reflecting...How did you discover your musical talent?

I've been acting and singing since I was a kid.  It always came naturally, but I'm from a big football town, so I always focused my energy on football.  In college, I realized the girls liked singers just as much as football players, so I decided to dedicate myself to singing! *Jeff chuckles*  Football was too much of a long shot, me being 5'8" and all...

Who has been your greatest inspiration musically and why?

Michael Jackson, Boyz II Men, Prince, all Doo-wop, Barbershop, (The) Eagles, Journey, Boston, Metallica.  They are all amazing talents, and I like them all for different reasons.  The consistency is soulfulness.

What do you feel you offer the music industry that we don't already have in other performers?
I don't think people know that I write, produce, compose, engineer and perform all of my own music.  I think that makes me a little different.  I also really truly care about the fans, and always give 100% onstage, whether there are 10 people or 10,000 people in the audience.

Have you encountered any problems in getting to this point in your career?

There are ALWAYS problems in the music business.  It is an extremely tough business.  I have had as many lows as highs, as most artists will articulate.  Fortunately, I kept plugging away, tried to stay humble, and kept the faith, and we've been able to sustain a spot in the industry for nearly 20 years.

What do you want people get from your music?

I just want them to FEEL something. That's the whole purpose. If they can feel what I felt when I wrote it, even better.

What has been your greatest achievement so far?
Personally, raising my kids.  Professionally, there are so many wonderful things I've gotten to experience, it's hard to choose.  I suppose having a number 1 single with Mariah Carey and Joe would be tied with doing a record with Stevie Wonder for a Disney soundtrack.

If you could collaborate with one artist, living or dead, who would it be and why?
Michael Jackson --  Best talent ever!

If you could play any venue in the world, which one would you choose and why?
I've played most of them, but I'd say Wembley Stadium right now.  I have to get that one crossed off of my list.

One track of yours that you think defines you and why?

If we're talking 2.0, it would be "Take the  Long Way Home."  It's a Bruno Mars' track.  It's a sexy, vibe-y falsetto tune, and that's my type of deal. One of my own tunes: "Perfectly Imperfect."  It describes me to a "T."  One thing I'm perfect at is being imperfect.

Nightlife Questions:
Do You Enjoy Going Out? And, If So, What Types Of Places Or Establishments Do You Like To Frequent?
I'm kind of boring. I like to stay home with my wife and kids, or lock myself in the studio. But, if I do go out, I like to go eat at cool restaurants. STK is a good steakhouse here in Vegas. (Also,) Gordon Ramsey just opened up a bomb burger place here in Vegas that rocks!

And, Do You Drink Alcoholic Beverages? If So, What Type Of Drinks Do You Enjoy?
I probably drink too much! I actually just quit for a while to get myself in better shape. But, I do like drinking Olde E, whiskey, vodka, whatever. I'm just not doing it for the time being.

Is there anything I left out that you'd like to mention?

You caught it all! Look out for my new show 'Men of the Strip.' We're going on a nationwide promo tour, and filming it for a TV show. Then, we'll kick off a residency here in Vegas. Go check out: menofthestrip.com, @menofthestrip on Twitter, and facebook.com/menofthestrip. You can catch me on any of the social media by just typing in my full name. Drop me a line. I like to talk to the fans when I can't sleep at night!

Any "message(s)" for our readers?
Thanks so much for all of the love and the support over the years. You are never overlooked, under-appreciated, or taken for granted. You take care of my family and I, and allow me to live my dream --  Namaste!

Official Behind the Scenes video of the MEN OF THE STRIP 2013-2014 Calendar Shoot:
http://www.youtube.com/watch?v=4kt0ReI2XT8