If you had told Jeff Timmons that he'd be the frontman and emcee for a male stripper show a few years ago, he would have laughed.
But times have changed since then and now the singer of 98 Degrees, the popular '90s boy band behind songs "I Do (Cherish You)" and "Give Me Just One Night (Una Noche)," is the co-creator of Men of the Strip, an all new male revue.
It's a show he describes as "music, dancing and sex all wrapped into one."
Men of the Strip is touring around the country, delighting women (and men) along the way. Throughout the tour cameras will be rolling, as the show is set to get the reality show treatment and become a dock-series.
Next stop for the men? Lancaster's Chameleon Club. The revue will be showing its stuff 8 p.m. Nov. 30. Tickets are $15-$20 and there is also an opportunity for a VIP meet and greet with Timmons himself (an additional $50).
Men of the Strip isn't the first time Timmons has dabbled in the stripping world - he got his start with the Chippendales, even though he was skeptical at first.
"Well a couple years ago I was asked to host the Chippendales in Vegas and, of course, I said 'No way,'" he recalled. "Then I went to see the show and I was like, 'This is awesome!'"
That started a gig as the Chippendales' emcee and musical act for a limited run in 2011. However, Chippendales wasn't the best fit for Timmons. He liked the show - but at the same time he saw a lot of potential for something different.
"I thought, what if I started a younger, fresher version of this?" he said. "That's how the seeds of Men of the Strip got planted."
Men of the Strip is more than just a younger Chippendale show, according to Timmons. "The dancing is different, choreography is different, costuming different," he said. "We wanted to make it a very entertaining show and add elements of Cirque in there and amazing lighting."
It's not too different from his days with 98 Degrees. "It's a boy band on steroids," Timmons said of Men of the Strip.
"[Back then,] the label used to love for us to do photo shoots with our shirts off," he went on. "Music and sexiness go hand in hand - but this is a more exotic and erotic form of that."
As for old 98 Degrees fans, they won't be disappointed, as the show will incorporate more than one of the old band's famous numbers.
However, Timmons won't be the one stripping, he's leaving that to the other gentlemen on the show. But he will be singing as they engage in various scenarios from cowboys to police officers. "It's more about using scenarios to use sexiness to stimulate the mind more than the body," Timmons said.
That doesn't mean the gentlemen don't look good - in fact, they're putting Timmons to shame.
"We were always in shape and that kind of stuff," he said of his days with 98 Degrees. "But these guys [the cast of Men of the Strip] are at a whole other level. They're body builders, they're shredded and they can all move."
"Sometimes it gets intimidating, but I'm fortunate enough that I have enough fans out there that support my stuff and make feel good," he added later. 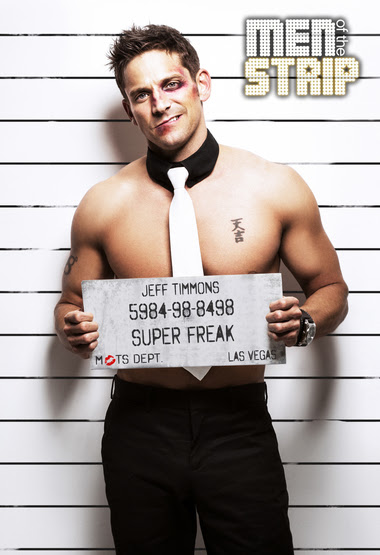