A night of memories with Blue, A1, and Jeff Timmons 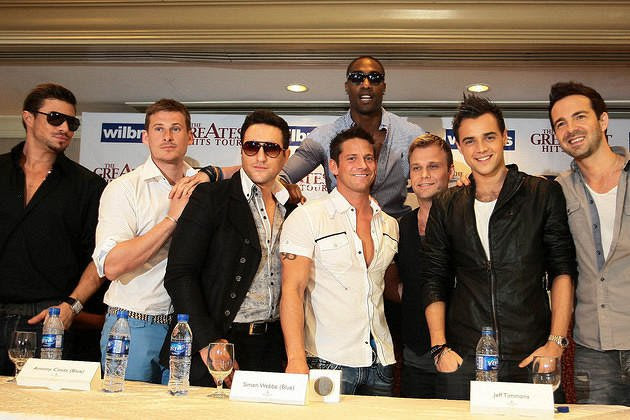 Filipino fans retraced their steps to the glorious era of boy bands, when international singing groups Blue, A1, and Jeff Timmons of 98 Degrees serenaded Manila on Saturday, February 25, in Smart Araneta Coliseum for “The Greatest Hits Tour.”


Jeff, A1, and Blue created a nostalgic mood as they each of their greatest hits which once dominated the radio charts and local airwaves. They also introduced some of their new songs.
Charm and good looks
The last time Pinoy fans saw Jeff, A1, and Blue was almost ten years ago. But the performers proved they still had the charm and good looks that captured the crowd back then.
The concert started with Jeff Timmons, former lead vocalist of 98 Degrees, performing the upbeat song “Because of You.”
Jeff, who came in a black long-sleeved shirt and jeans, also performed “I Do” and “Invisible Man,” where his fans loudly sang along with him. While singing “I Do,” Jeff serenaded a girl on stage and knelt before her in supplication.
And since he came solo, minus the rest of 98 Degrees, South Border–whom Jeff described as `incredibly talented artists’–accompanied him on stage. His rendition of South Border’s mellow hit “Rainbow” surprised and impressed fans.
British-Norwegian pop group A1, composed of Ben Adams, Mark Read, and Christian Ingebrigtsen, welcomed screaming fans with their song “Same Old Brand New You.” With Ben on lead vocals, Mark on keyboards and Christian on guitar, A1 drew the crowd with some of its greatest hits like “Take on Me,” “Caught in the Middle,” “Ready or Not/Everytime” and “One More Try.”
Ben, who still has that boyish vibe, led the crowd in singing and dancing along with the band. This just reinforced the band’s opinion that they like Filipino fans because they know the lyrics and sing along with them during concerts.
Ben proved he was a pro in interacting with fans. He always went near them and instructed the cameraman to pan the camera close to the group, as he “feels far” from the fans.


A1 said “Mahal Kita” a few times to yelling fans and shared that their Filipino names are Chan-chan, Macoy, and Bentoy. Needless to say, the crowd reacted with laughter and cheers.
The group further pumped up the concert with its rendition of Lady Gaga’s “Poker Face” and Black Eyed Peas’ “I Gotta Feeling.”
Meanwhile, award-winning British boy band Blue, made up of  Lee Ryan, Duncan James, Antony Acosta and Simon Webbe, took the final stage with the ballad ”Sorry Seems to be the Hardest Word” as its first song.
Looking dapper in tux and suits, Blue followed the song up with all-time favorites “If You Come Back,” “You Make Me Wanna,” and “Breathe Easy.”


Lee was noticeably playful and goofy as he performed cute dances and made funny remarks. Simon, on the other hand, told the crowd that he knows Filipinos have a passion for singing, so he instructed fans to sing loudly with them.
The band then changed into casual clothes and performed their more upbeat songs “One Love,” “All Rise” and “Fly By” with amazing energy. They danced and went around the stage to get near to the crowd.
Fans were thrilled to see Duncan, Lee, Simon, and Antony dancing to the choreography of these hit songs, which they themselves used to dance almost a decade ago.
Blue also had good news for fans: they’re coming up with a new album this year.
Blue, A1, and Jeff Timmons may be miles away from Manila. But fans will continue to remember them because of the good time they had in the concert and–in the case of Blue–a brand-new CD to listen to.