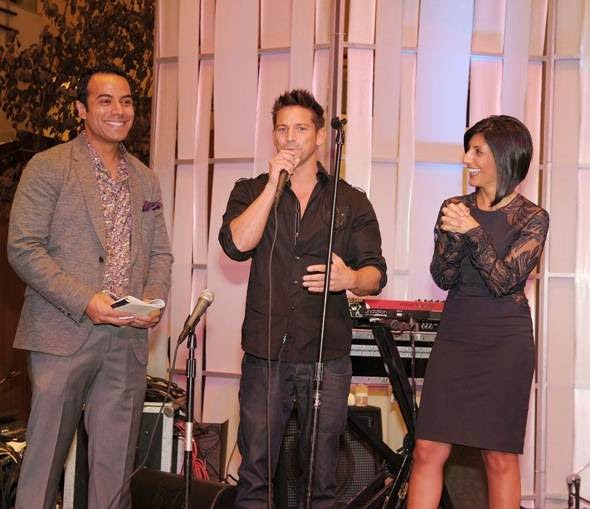 Thousands of Las Vegas’ most fashionable showed up last night for Fashion’s Night Out at Crystals at CityCenter. Crystals entertained guests with in-store experiences, heart-pumping entertainment from soul group Fitz and the Tantrums, delicious restaurant tastings, the stylish talents of KLAS-TV news anchors Chris Saldaña and Dayna Roselli, and a surprise visit from American pop singer and member of the Grammy-nominated group 98 Degrees Jeff Timmons.

Fitz & The Tantrums stole the show for the evening. Taking the stage with “Don’t Gotta,” the crowd gathered to dance to the infectious beats and even chime in on a surprise cover of the Eurythmics’ ‘80s throwback “Sweet Dreams.” The Rolling Stone “Band to Watch” closed their set by belting their breakout hit “Moneygrabber” and ended the night perfectly when devoted fan and Las Vegas local Melanie Munsell (who waited more than three hours to be in the front row) won a signed Fitz & The Tantrums’ Fashion’s Night Out tote. She wasn’t the only one squealing when the band, including lead vocalists Michael “Fitz” Fitzgerald and the seductive, velvet-voiced Noelle Scaggs, signed autographs and took pictures with a line of anxious fans during the post-show meet and greet.

The crowd had more reason to cheer when Grammy-nominated 98 Degrees member and Chippendales’ star Jeff Timmons popped onstage for an impromptu appearance, modestly dismissing his fans’ applause by saying, “Tonight is not about me, it’s about these great retailers benefiting these amazing local charities.” Timmons and his adorable expecting wife were pulled to the stage after being spotted shopping by 8 News Now personality, event host and friend, Chris Saldaña.

Saldaña and his co-host and colleague Dayna Roselli guided guests through the night’s raffles with prizes. Saldaña showed his fashion chops suited in Paul Smith (right down to a pair of enviable striped socks) while Roselli wowed in a va-va-voom lace-inset Stella McCartney dress.