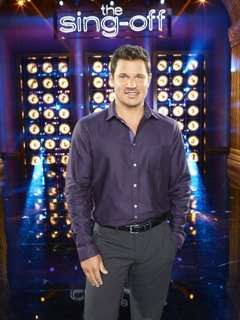 The Sing-Off kicks off season three tonight (NBC, 8 pm et/pt), as 16 a capella groups compete for a Sony recording contract and a $200,000 cash prize. Celebrity judges on the show include returnees Ben Folds, Shawn Stockman, and newbie Sara Bareilles.

“This show has such a contagious atmosphere to be around,” says The Sing-Off host Nick Lachey, who years ago fronted the boy band 98 Degrees. “And you see how passionate these groups and the joy that they have performing on stage each and every show. It’s contagious. It makes you want to get out there, and do it. And certainly, I miss my guys, and there’s nothing but good memories there (with 98 Degrees).”

Click on the media bar and listen to Lachey talk about catching New Kids on the Block in concert:

As for the possibility of a 98 Degrees reunion, Lachey simply said, “Maybe in the future, we’ll see that happen.”