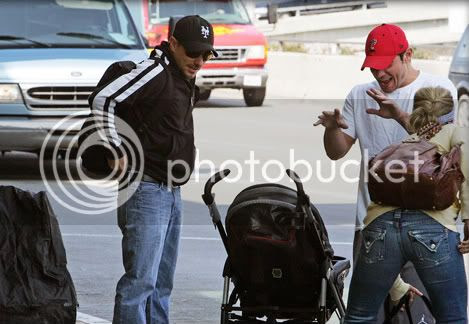 Nick Lachey looked a little sillier than usual today, as he attempted to entertain his niece Isabella after dropping her off, along with his brother Drew and Drew's wife Lea, at Los Angeles International Airport today.

Before sending the relatives off, Uncle Nick made funny faces at little Isabella in an effort to get a laugh out of the tot.

Now those are some solid uncle skills. Though he probably did the same thing with Jessica Simpson.

We can imagine the nights those two spent together, with Nick jiggling his keys as Jessica looked on in mesmerized awe. Or throwing a blanket over Jessica's head, then pulling it off while squealing, "Peek-a-boo!" and Jessica giggling with amazement that everything was still in the same place it was before the world went black.

We don't know why they didn't include those moments as extras on the DVDs of Newlyweds: Nick and Jessica.

To see lots of pictures go to: bauergriffinonline.com