Thanks to the girls at the Nickfantic
Board for finding this. I do not know these people. Just a neat little story that was found on another forum with Nick & Drew looking OH SO cute!!

Source
I would like to give a big thank you to my mom, Aunt Maryjean and Nana for making it possible to go out with all the cousins for one wild and crazy night. We rented a van and worked our way through a small portion of Scottsdale. Our first stop was to this unique little restaurant/bar/marketplace called Olive and Ivy Restaurant and Marketplace. It was very strange to be in this bar where a DJ played music and also view different things on the menu around the corner in the restaurant portion. This place was so unique and a little pricey, but I have my brother Chris to thank because we all unwittingly purchased drinks on his tab and at the end of the night he still paid for it all. Thanks Bro! We ended up getting a little tipsy and who did we run into? Well, Nick and Drew Lachey!!! Of course, me being the brazen drunk girl, I interrupted him mid-conversation with a hot blonde and asked for his picture. Yes, I was one of those people that night. He was reluctant to give it to me saying that he was burned in the past before by the Phoenix Sun. I told him not too worry because I was from Texas to which he replied, "Oh, well that's a double x." Because I was tipsy, I didn't hear that part or I would have responded with something like, "there are a few people who give it a bad name or something." Instead, like a true warrior, I hopped on over to Drew--his manager now and picture attorney--to plead my case.

I basically told him I loved him on Dancing with the Stars...not a total lie. You see, I have only watched one season and it happened to be season #2, his reign. I didn't catch the first season and some people tried to sway me into watching, so I caved and did start watching. I actually enjoyed watching him, but overall I found the show boring--no offense to those who enjoy it. Not my cup of tea. I am obsessed with Big Brother. I do admit, unfortunately; but that's a different post. Needless to say, I have not watched another season of Dancing with the Stars.

So, getting back to my story....it was not a complete lie. I think this buttered Drew up because he allowed us to take a picture with the both of them. I did think this was nice and at the end of the evening, I walked up to Nick and thanked him for being so cool about it. He was gracious and kind saying, "No problem. You guys have a good night." So this is how the sighting came to be. He didn't seem as tall, still cute though. In the picture he is wearing a shirt identical to one that Ryan owns, although I happen to think Ryan wears it better. I'm just saying... 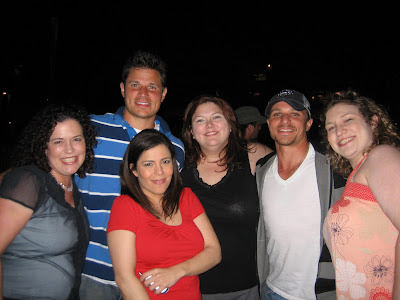 Looks like whoever took this picture was a little tipsy as well! 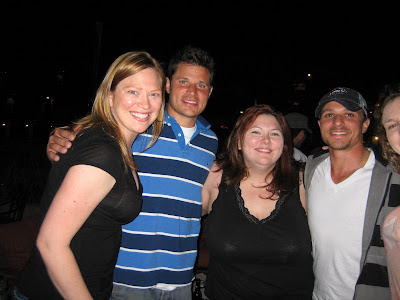