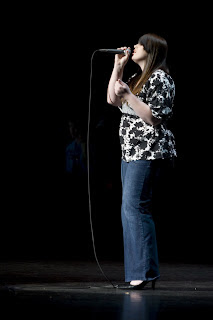 Veishea isn’t really a time for learning. Most people won’t even be in class Friday when they take the day off to celebrate. But I did manage to glean some interesting tidbits from Cyclone Idol on Thursday. Besides the fact that, of course, there are some amazing singers at Iowa State. 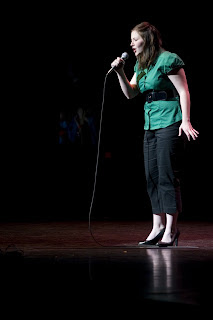 • It helps to know a mentalist. Jeff Timmons, formerly from 98 Degrees, was the master of ceremonies. The Ryan Seacreast, if you will. However, he was temporarily delayed by bad weather. Fortunately, mentalist Jim Karol showed up for a preview performance. He showed us his amazing card throwing and threatened to mentally shock us off our bums. Check him out Saturday night on Central Campus.
• ISU Director of Intercollegiate Athletics Jamie Pollard had never seen “Star Wars.” So when Karol asked him to make a sound like Chewbacca, he was a little lost. We, in the audience, helped him out, and soon he was trilling the Wookie “Plrrrrrr” into the microphone like a natural.
Audrey McGargill, sophomore
in child, adult and family services, performs Thursday
night in Stephens Auditorium during
the Cyclone Idol Finals.
Photo: Manfred Strait/Iowa State Daily

• Two Paula Abduls do not an Idol show make. Both commenting judges, Pollard and Mishelle Michel, Program Assistant in the Department of Public Safety, were more like Paula than Simon or Randy. They mostly said, “Good job,” and “That came from your heart.” Although these sentiments are true, at that point I realized Simon - love him or hate him - and Randy are what give the judge’s table its worth. Thankfully, all the Cyclone performers were amazing, so they didn’t deserve many bad comments. But the lack of criticism, even constructive criticism, rendered the judges' table fairly ineffectual.
• ISU students love country. Neil Hewitt, freshman in agricultural studies, got up with his cowboy hat, guitar and said, “I’m going to sing a song about turnip greens.” Nearly everyone knew exactly what he was talking about before he ever said the name of the song. And we cheered - loudly. It may also be the reason, besides his great voice, that he won the People’s Choice Award for the evening. He took home a pretty sweet trophy.
• There is, believe or not, someone who can sing songs Josh Groban has done without looking like a fool. The last contestant, Jesse Donner, sophomore in aerospace engineering and music, sang “You Raise Me Up.” I was worried for him at first. Groban’s shoes are tough to fill, but he managed to pull it off splendidly. Judge Michel made the subtle observation that, as he sang, you could not only hear, but feel the song. Judge Pollard said, “We have a winner.” I’m not sure about the tact he displayed with that remark, but Donner was fantastic - and he did win.
If you missed Cyclone Idol this year, you should really check it out next time. We danced with Jeff Timmons, screamed for the contestants and heard some great singing. Timmons did have to glance at his clipboard to remember Veishea’s name, but I’ll give him a break. He’d been sitting on the plane for a while at that point. It was fun, free entertainment, and didn’t require you to wear something around your wrist.