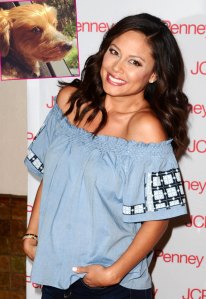 He’s more than just a pet, he’s family! Vanessa Lachey couldn’t help but gush over her and husband Nick Lachey’s dog during a segment of “My Pet Tale” on Thursday, November 1.

Wookie looks like Chewbacca,” the 37-year-old Top Chef Junior host began a video for the Today showOpens a New Window.. “He is a mixed breed — Yorkie-Poodle mix — he’s about 15 to 20 pounds, so he’s a little guy.”
As for why the pair — who tied the knot in 2011 — opted for a tiny pup, Lachey explained: “We got him smaller so we can travel with him, because we travel a lot. He’s our first born.”
The Truth Be Told actress went on to detail how she and the 98 Degrees singer chose the name for their four-legged friend.
“Chewbacca from Star Wars is actually a Wookie, so we named him Wookie,” she gushed. “We got him 7/7/7, so we should have named him Lucky, so that makes him 11.”
However, just because the canine is getting up there in age, doesn’t mean he’s ready to slow down.
He has these moments of still being a puppy. He wants to run around and protect the kids and chase them,” she said. “It’s fun to watch. He still has this zest for life.”
Vanessa went on to note that Wookie made the couple “a complete family,” when they made the decision to get her, adding that the adorable pooch slept in each of their children’s nurseries when they were newborns.
“Having Wookie prepared me for being a mother to my three children,” Vanessa continued. “In a way where you are now responsible for somebody, or something, else as opposed to just yourself.”
Vanessa concluded: “Wookie makes our life better … we’ve had him for 11 years and every time we come home he’s still excited to see us and it’s a beautiful thing to watch and be a part of … he’s the best.”
Vanessa and Nick share three kids together: Camden, 6, Brooklyn, 3, and Phoenix, 1.