Turn the holiday heat up to 98 Degrees 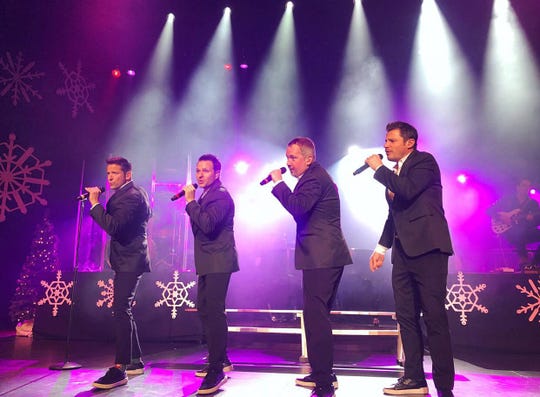 Justin Jeffre is a bit sheepish about the fact that the "Christmas Tour" of his band, 98 Degrees, touches down in Bremerton three weeks before Thanksgiving.
"It's the only way we can make it work," said Jeffre of the massive 36-show tour, which kicked off Nov. 1, runs through Dec. 21 and includes a Nov. 7 stop at the Admiral Theatre. "We really love doing it, and we want to hit as many places as we can."
Unlike their heydays, though, when they sold 10 million records between 1997 and 2002, Jeffre, brothers Nick and Drew Lachey and Jeff Timmons have other people to please beside their fans.
"We're all married and have children now," said Jeffre of the resurgent quartet, who turned down the heat following that torrid five-year stretch and were inactive as a band for more than a decade. "Part of the trick of making it work is finding that balance (between band time and family time), being able to manage both.
"Now, we make sure we take breaks and get home to see our families," he added. "We start earlier, but we also make sure we finish up earlier. I think we went right up to about Christmas Eve last year."
Jeffre said the quartet — which began testing the waters for a comeback with a few gigs starting in 2013 and now consider themselves revved back up to full swing — were in touch all during their hiatus, while they were all building their families and pursuing individual opportunities. Jeffre himself made an unsuccessful run for the mayorship in his native Cincinnati.
"We're friends. We're like brothers," he said. "It's always been something we've talked about, but we've definitely made the decision (to again be a full-time concern). We decided it wouldn't be worth it to just get together once in a while. It's too much work to put the machine back together."
The group — all native Ohioans — formed when Timmons, who had relocated to Los Angeles to pursue his career, invited Nick Lachey to come west and start a band. Lachey brought along Jeffre, his classmate from Cincinnati's School for Creative and Performing Arts, and younger brother Drew Lachey soon joined the mix.
After building a base in L.A., 98 Degrees were discovered and signed by Motown Records. Their first single, "Invisible Man," vaulted them into the ranks of teen-oriented vocal groups like the Spice Girls, Backstreet Boys and NSYNC. They embarked on what Jeffre called a "rocket ship ride" until they decided to pull back, and performed together only rarely until the reboot began.
One thing the band always has been into is Christmas. They're recorded several holiday albums, and embarked on their first major holiday tour in 2017. Jeffre said it was so much fun, and so well received, they just had to do it again.
"This year, we're trying to do a lot of songs that weren't on last year's tour," he said. "For the most part, this songs people have never heard us sing or perform."
That's the second set. The first is heavy on hits, the ones Jeffre said "fans wouldn't be happy if we didn't do."
Jeffre said that for the most part, 98 Degrees are feeling less heat — as in pressure — since reconvening than they did at the height of boy-band mania.
"We also have a lot more experience," he said. "We're better singers, better performers, and we know how to handle being on the road. We have a lot of fun, and the fans can really see that."
Jeffre described the fan base now as multigenerational, but still leaning heavily to the female side.
"We always joke that if you're a single guy, there's no better place to be than a 98 Degrees concert," he said.