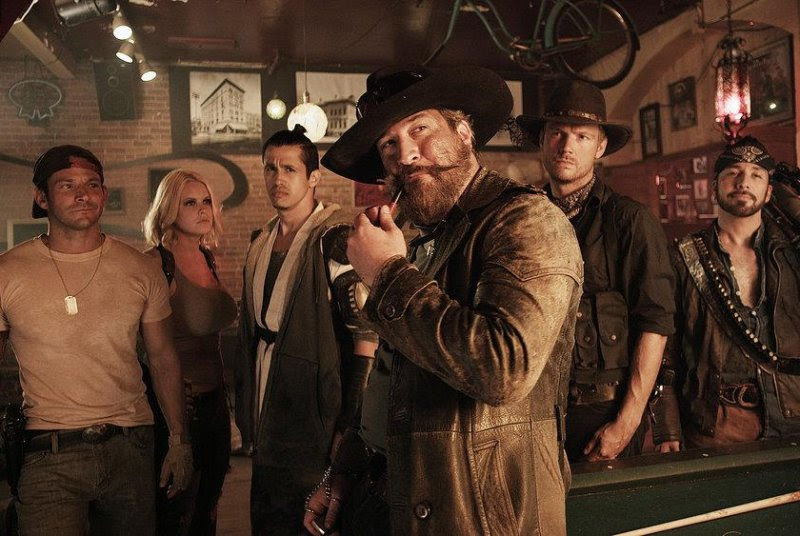 NEW YORK, April 1 (UPI) -- Nick Carter says he always kept his fellow, former boy-band members in mind as he crafted characters for the new Syfy flick Dead 7.
Carter wrote and produced the mashup movie, and starred in it alongside many of his recording-artist friends, such as his fellow Backstreet Boys Howie Dorough andA.J. McLean; Chris Kirkpatrick and his NSYNC bandmate Joey Fatone; Jeff Timmons of 98 Degrees and Erik-Michael Estrada of O-Town.
"A.J.'s character, which is one of my favorite characters, when I had this idea, eight, nine years ago, writing it, I was on a tour bus next to these guys with my computer, writing it, looking at A.J. every, single day, thinking about: 'I really want him to be the villain. This is the kind of person I want him to be,'" Carter told UPI in a phone interview Tuesday. "So, yeah, he was tailored for that part and it was well-thought-out. Also, Joey... I always wanted Joey in the film and he was perfect for it because I watched him in the original My Big Fat Greek Wedding and watched him in The Cooler and I loved his personality. He's over-the-top. He's great. And, so, yeah, most of the people I tailored the parts after them and I thought about it because I wanted to play on people's strengths, as well. Because, look, I don't consider myself the greatest actor, but that was my problem going on auditions in Hollywood and, trying to fit into the acting world, just never worked for me. So I was like, 'Well, I'm going to try to do something and create it for myself and something I can learn and grow from.' And that's what I did with all the characters."
However, the popular musician and one-time Dancing with the Stars contestant admitted it was a long, bumpy road from when he first started penning the script to the ultimate unleashing of the finished Dead 7.
"I started eight years ago with a script called Dead West," he recalled. "I had the concept of zombies in a western setting, with a couple of boy-band cast members, maybe some sports stars and this idea. So, I had no idea what I was doing. Read a couple of books, screenwriting books, then started learning how to write on Final Draft and jotted down the screenplay idea and then it took eight years to get to this point after some crowdfunding and a movie that I was supposed to do -- called Evil Blessings -- and then I had to put that aside and change my mind to go back to Dead West because my director passed away for the Evil Blessings movie, so there were so many trials and tribulations and things that occurred that led to the decision of going with that screenplay and turning it into this movie Dead 7. So, it was a lot harder... and, so, it has been such a relief for it to finally come out, especially since it took so long."
Carter said he would love to act alongside his buddies again and wouldn't rule out writing another screenplay, but he insisted he is taking a wait-and-see approach to his plans until after audiences weigh in on the movie.
"I've done everything that I could. I put all my energy and effort into it, so if people enjoy it and like it, then, yes, I would love to do more," he emphasized. "Most people who make movies understand that they do it for the love it, for the creation, for the artistic side of it, regardless if it is a blockbuster movie or a B movie. It's all about how much fun it actually is to do."
Asked if he intentionally paid homage to the Mad Max film franchise and auteurQuentin Tarantino, Carter replied: "That's what I'm a fan of. I grew up watching the original Mad Max on repeat. The spaghetti westerns from Clint Eastwood. Those are in my blood. The zombie movies from Night of the Living Dead to Evil Dead, those are in my blood, what I grew up on. Quentin Tarantino is probably in my Top 3 favorite directors of all time. ....
"What you see is definitely a combination of all the twisted stuff that I've watched and experienced in my life," he laughed.
Co-starring Jon Secada, Carrie Keagan, Art Alexakis and Chloe Lattanzi, Dead 7debuts Friday night on Syfy.