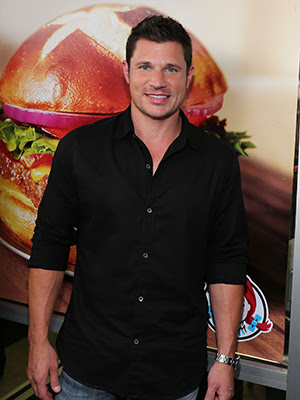 Nick Lachey is not afraid to get down and dirty when it comes to his son.
The 98 Degrees frontman got his first taste of fatherhood on September 12, 2012, when he and his wife, Vanessa Minnillo, welcomed Camden John. Lachey, 39, already feels confident about certain aspects of his new role.
"I change a wicked diaper," he tells omg! at the launch of the #PretzelLoveSongs campaign promoting the new Pretzel Bacon Cheeseburger at Wendy's. "I have never been afraid with a diaper change."
But that wasn't always the case. The current host of NBC's "The Winner Is" laughed as he recalled a tough time at the beginning.
"There was one early, early, early [diaper] change when he was doing it both ways and stuff was flying. We were trying to hold it all together," he said. " I think every parent has that story – until you learn what to anticipate and how to anticipate it, you are going to get caught occasionally."
Lachey promised his diaper-changing skills have gotten much better these days, but it takes two to tango. Ever the sweetheart, Nick didn't shy away from giving his Vanessa a nod of approval for her skills with the Pampers.
"She has done more of them — I'll give her credit there. But I can hold my own. She is quicker than me though," he confessed. "In a race, I'd lose, but in terms of quality of diaper application, I am pretty confident."
One place where Lachey is a winner is onstage. The crooner – along with the rest of 98 Degrees – is currently part of The Package Tour with New Kids on the Block and Boyz II Men. And, yeah, that's in addition to hosting the reality competition show on NBC, promoting his new album of lullabies, and singing tweets (seriously) in honor of that new burger at Wendy's.