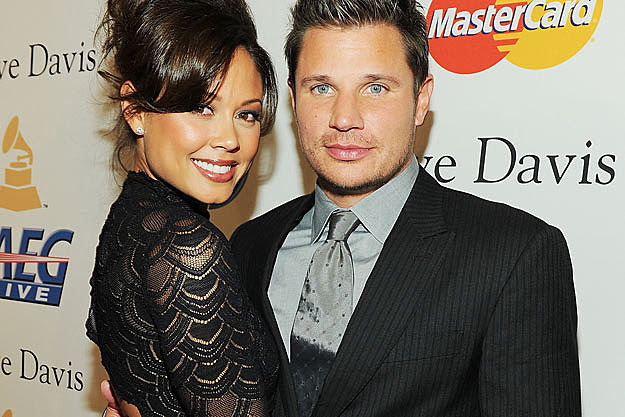 Nick Lachey and Vanessa Minnillo have plenty of time to prepare for the birth of their first child — she isn’t due, by Nick’s estimation, until “late summer, early fall.” But that doesn’t mean they’re waiting until the last minute to talk about baby names. In fact, as Nick revealed during his recent appearance on ‘Live! With Kelly,’ he has a few favorites already picked out.
“If it’s a girl, I think it might be Sophia,” Lachey told host Kelly Ripa, crushing the hopes of longtime fans who’d been holding out for a baby Jessica. And although he hemmed and hawed about what he’d name a boy, initially saying “If it’s a boy, I’m not sure,” he eventually admitted his preference for Colin John. “Call him C.J. for short,” said Nick. “C.J. Lachey.”
Nick also related the story of how he found out Vanessa was pregnant. Just like a lot of dads-to-be, he was away in the Caribbean when he got the news: “She was in New York and I was in the Bahamas. She went to the store and got a pregnancy test and it came back positive. We’re having a baby!”
He went on to talk about the excitement of first-time parenthood, saying, “This is the one thing that more than any other I’ve looked forward to, and it’s overwhelming.” Part of what’s keeping him busy? Vanessa’s baby cravings. “She loves, she craves Mexican food right now. She could eat a burrito a day so you can imagine what our house smells like right about now,” Nick joked. “I’m the one running in the middle of the night to the restaurants to get her whatever she needs.”