Nick Lachey Reveals Nostalgic Stories Behind 'Soundtrack of My Life'

There’s nothing more exciting to a ’90s girl than boy band news, and Nov. 11 marks a new era for 98 Degrees’ Nick Lachey with the release of Soundtrack of My Life. Although this isn’t his first solo record, it’s a fun new concept that doubles up on the nostalgia as he covers iconic tracks from some of his favorite films. To celebrate the next big step in Lachey’s career, I talked to him about the process of narrowing down the 10 tracks on the album — which surprisingly only had one painful cut — and how he put a new spin on each and every one.
During the selection process, it was all about finding songs that spoke to him. ”I think every song means something to me on a personal level. Either a moment in a film that really grabbed me or a memory,” Lachey shares. “For instance, ‘What a Wonderful World’ has been done in a lot of films, frankly, but I remember it from Good Morning Vietnam. I remember watching it with my dad for a first time as a kid and him having to explain to me what the Vietnam conflict was about. And it became all the more poignant with the unfortunate passing of Robin Williams, because he was just brilliant in that film.”
When it comes to making these covers his own, Lachey knows he can’t compete against the likes of Steven Tyler or Peter Gabriel. Instead, he chooses to put his own spin on it instead of transforming it into an unrecognizable new song. “It’s a tough line to walk when you’re covering well-known hit songs like these. They’re so iconic when they’re done the first time,” he says. “I can’t look at it as a competition of which one was better. You have to make it your own. But at the same time, you want to kind of pay homage to it and make sure you’re doing the same song.” 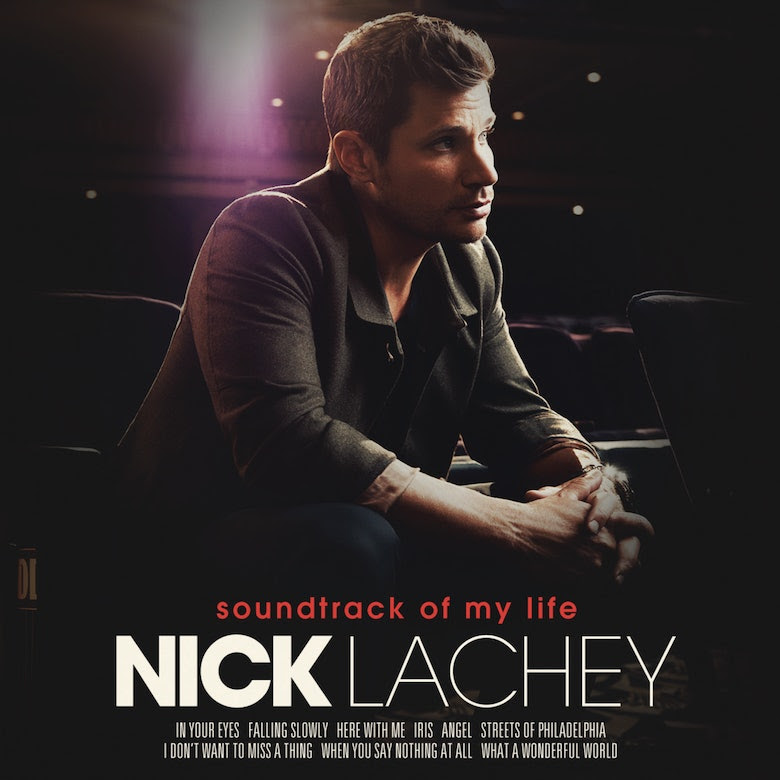 Soundtrack of My Life is filled with an eclectic mix of music, ranging from classics like Bruce Springsteen’s “Streets of Philadelphia” to more modern hits like Goo Goo Dolls’ “Iris,” but there was one lesser-known song that didn’t quite make the cut. As Lachey explains, it’s just because “not that many people know” his favorite song — though you may recognize it if you like J Lo. “It’s by a singer named Glenn Lewis and it was from a film called Maid in Manhattan, the Jennifer Lopez movie. It’s a great song written by Robin Thicke called ‘Fall Again’ and it’s always been one of my favorite songs,” he reveals. Lachey wanted to make sure that people can really recognize the tracks he chose for Soundtrack of My Life, but he hinted that if Volume 2 of his covers album happens, maybe it will be on there.
Moving forward, he’s going to try to strike a balance between covers and original music, which he says is difficult to do. Lachey’s last traditional solo album was 2006’s What’s Left of Me, and he went on to release a selection of lullabies — aptly titled A Father’s Lullaby — in 2013. With those behind him, he’s ready to just focus on “singing great songs,” no matter who writes them. He is ready to pen his own material, though, hinting that the next album you we see from him will “probably be another original album.” Could there be more up Lachey’s sleeve than he’s hinting at? Over almost two decades in the spotlight, he has worn many hats, ranging from musician to reality star to host, but there is one thing he doesn’t plan on pursuing anytime soon: acting.
“I think there’s a reason you haven’t seen me do a lot of acting, because I’m not a very good actor,” he admits with a laugh. “I’ve done a handful of stuff and it’s always been fun … but opportunities have taken me in other directions and hosting is something I really enjoy and am having fun doing right now. But you know, never say never — you never know what the future holds in that regard. But as of now, it’s not anything that I’m pursuing actively.”