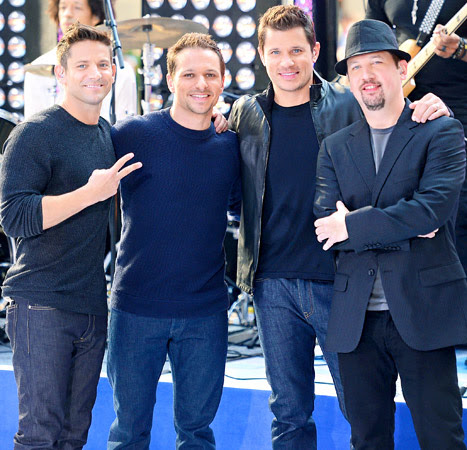 Once upon a time, not so long ago but in another era completely, Nick Lachey and his 98 Degrees bandmates were just a group of earnest, twenty-something hunks who wanted to "cherish you." Now that they're all grown up, however, they have a few other, more adult ideas in mind. One month after announcing their upcoming album 2.0, the "boy" banders have released a new, very sexually suggestive single, "Microphone."
The song, a bass-heavy dance track, finds the four guys -- Lachey, 39, his younger brother Drew, 36,Jeff Timmons, 39, and Justin Jeffre -- using not-so-subtle innuendo to refer to their assets and various sex acts. One verse asks the object of the singer's affection to "put this [microphone] in your hands / and hold it up to your lips." "We can be a two-piece band," Lachey croons, "and make some hits while you sing in this microphone."

The chorus, meanwhile, includes lines like: "Hey lady, grab the microphone / and say 'do-re-mi-fa-so-oh-oh-oh' / yeah, baby, you're wound up and ready to blow / like 'do-re-mi-fa-so-oh-oh-oh.'"
98 Degrees rose to fame in the late 1990s, during the heyday of boy bands like N Sync and The Backstreet Boys. They went "on hiatus" in 2002 to pursue other opportunities -- Lachey didNewlyweds with ex-wife Jessica Simpson and released solo albums in 2003 and 2006 -- but they reunited in 2012 to perform at a music festival in Pennsylvania.
In January 2013, they announced that they were reuniting again, this time for a summer tour with fellow '90s groups New Kids on the Block and Boyz II Men. The tour begins on May 31, 2013.
"We are really excited to bring our fans new music and get out on the road," Lachey said in a release about the tour. "This is a long time coming."