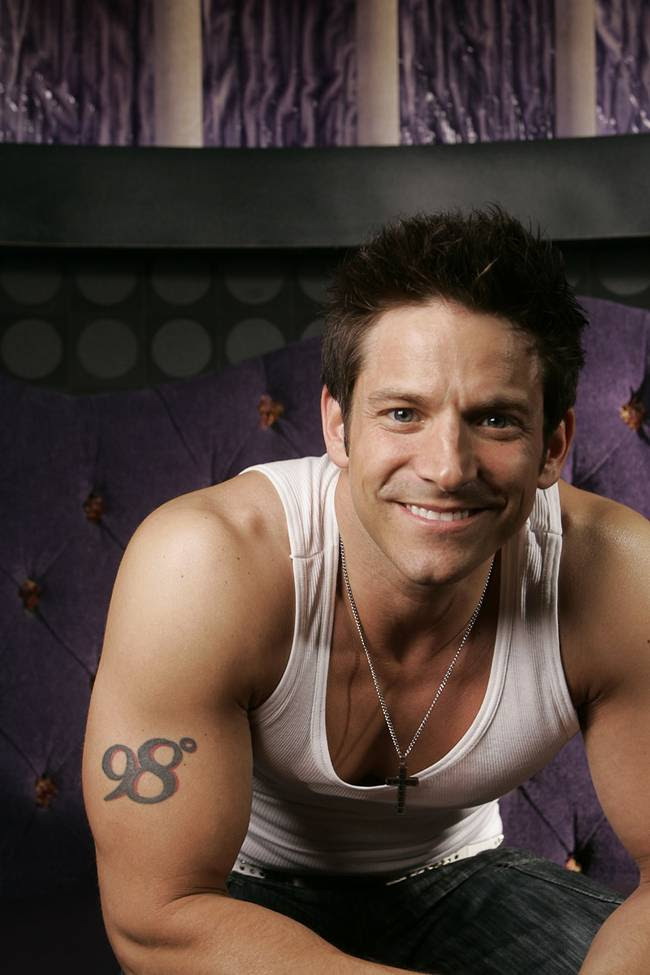 Jeff Timmons, whose tattoo reflects the name of his former band, not the temperature in the photo studio.

Across the table sat Jeff Timmons, a founding member of 98 Degrees and, for a time, a guest star of the adult male production Chippendales at the Rio.

Yet somehow, the conversation started not with how and why Timmons decided to spend some of his on-the-clock time with a bunch of oily dancers donning leather trou.

Instead, the ’90s era pop sensation bemoaned LeBron James’ inflammatory exit from the Cleveland Cavaliers to the Miami Heat. This conversation started without warning because Timmons hails from Canton, Ohio, and Tricia McCrone is from Cleveland. And McCrone is in play here because she co-hosts “Kats With the Dish,” which gives her a suitable platform to ask a member of 98 Degrees about NBA free agency.

Thus, two-thirds of those in the conversation had an interest in how and why James left the Cavaliers and signed with the Heat last off season, and McCrone swiftly asked Timmons if he is still a fan of the Cavs.

“I was, I was. But I am not,” Timmons said. When asked about James, he said, “I am disappointed in LeBron James. … I am in the entertainment business, and at the end of the day, fans think that you owe them something specifically, and you do -- great entertainment. But the way he left was very arrogant, in the way he presented it.”

Timmons, who said he understood James’ desire to win an NBA title with a better cast of players, also assessed James’ performance in last year’s NBA playoffs by saying, “He quit. He quit.” Never mind that James and the Heat just whipped the Celtics 4-1 to advance to the Eastern Conference finals of the NBA playoffs.

As the sports talk indicates, it was a pretty freewheeling, lacking-in-focus, interview segment, which you can link to at LasVegasSun.com/katsreport. We did get around to why Timmons is onstage with Chippendales beginning Thursday and running through June 5. We learned that Timmons is not actually applying the body oil and dancing with the troupe, but he’s slotted in the show to sing to the largely female audience and add some star propulsion to the 9-year-old Las Vegas production. The first three years were spent at Club Rio, then the show moved to its own theater at the Flamingo Road parking garage entrance to the casino.

Timmons will sing 98 Degrees’ hits (the band has sold 15 million albums, so there is plenty to pluck from), uncork some of his own new solo material and also emcee the show.

“I would never have thought of doing this in a million years,” said Timmons, who assigns responsibility (or, maybe, blame, depending on if he is buried under an avalanche of women during the performance) on Chippendales PR man Michael Caprio. “A lot of people might not remember me from 98 Degrees, and I have my own material out there. It might be a good way to get my name back out there. … It’s a multimillion-dollar production, I checked it out, and the elements that I would be providing would bring another sort of entertainment to a show that is already entertaining for a lot of fans who hit my demographic already.”

Which is, mostly, amped-up women.

“I’m really looking forward to the opportunity,” Timmons said. He might well be the one performer to take this team to the next level, something LeBron James himself would certainly understand.