Nick Lachey: Upcoming Wedding Will 'Be About Vanessa' 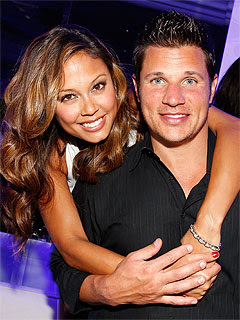 They're not in the planning phase yet, but Nick Lachey says that when he and Vanessa Minnillo begin to think about their wedding, he expects to take a backseat.

"I want it to be about her," Lachey tells PEOPLE. "Any guy will tell you that it's probably more about the bride than the groom. It's just about celebrating your love for each other."

Lachey, 37, met Minnillo, 30, four years ago while filming a music video for his song "What's Left of Me," and, according to him, the two instantly connected. "She's my soulmate in every way," he gushes. "She gets me, I get her. We enjoy a lot of the same things and we enjoy each other's company."

One of the things they share is a love of music, which comes in handy, since Lachey is not only a singer, but starting Dec. 6 he will be hosting NBC's Sing Off competition, too.

"[Vanessa] is an incredible host – that's what she's done for years – so I get a lot of advice from her," he says.

In between episodes, the newly engaged couple will also head to Lachey's hometown of Cincinnati, where they will visit the Cincinnati Zoo and the Cincinnati Children's Hospital for philanthropic reasons. They'll also spend time with Lachey’s brother, Drew, and his wife and kids.

"It's great being an uncle," Lachey says. "Vanessa and I try to spoil them every chance we get!"

Playing St. Nick to the little ones also has Lachey thinking about his own future – and how much he wants kids of his own.

"I'm pushing 40 here, so the time is probably imminent," he says. "Everything happens in the right time and for now, it's good training to be an uncle. Hopefully mine will turn out as good as [Drew's]!"

In the meantime, Lachey is excited to be engaged to the love of his life. "She’s a great girl," he says. "She's incredibly intelligent, incredibly personable. She's independent, yet supportive. I'm extremely happy that she's mine."