TV star Vanessa Minnillo insists she is still dating singer Nick Lachey, and the couple is even considering marriage.

Minnillo and Lachey have been dogged by rumors of an impending split since they began their love affair, which started after Lachey's marriage to Jessica Simpson collapsed in 2005.

The pair was forced to deny breaking up in April amid reports Minnillo was romancing her "Disaster Movie" co-star Matt Lanter.

And the former MTV presenter has again insisted they are still a couple, hinting they could be set to make the relationship more permanent.

Speaking to Las Vegas columnist Robin Leach, Minnillo pointed to a five-carat ring on her middle finger and said, "It will be 10 carats when it moves to the fourth finger!"

And in a subsequent interview with Leach, she adds: "This romance is still going strong. There will always be rumblings and rumors that we've broken up, but in fact, it's very much still on -- and it keeps on getting better. ... Maybe this will be the one time I wind up the bride instead of the bridesmaid!" 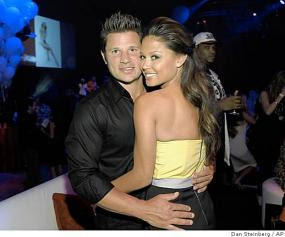 I like Nick alot he seems like a wonderful person.I wish him all the happiness in the world but i however hope that he really thinks twice before marrying this girl.