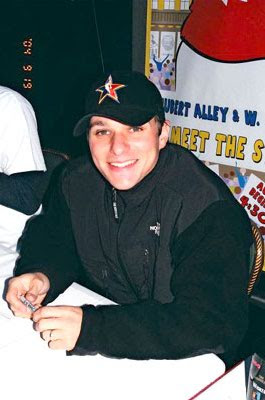 Spamalot's Drew Lachey will host Broadway on Broadway 2008 (www.broadwayonbroadway.com) on Sunday, September 14th at 11:30 a.m., it was announced today by The Broadway League and The Times Square Alliance. Presented by Continental Airlines, the annual free outdoor concert brings together stars and performances from current and upcoming Broadway productions to celebrate the beginning of the new Broadway season. For the event, Times Square will be "shut down" to make room for the 50,000+ attendees. This kickoff to the 2008-2009 Broadway season stretches from 43rd to 47th Streets and fans should arrive early for a good spot.

Mr. Lachey, perhaps best known as the winner of "Dancing With the Stars" and a member of the phenomenally successful pop group 98 Degrees will host a show featuring appearances and performances by stars from upcoming productions such as A Tale of Two Cities, Billy Elliot and 13, A New Musical, as well as some of Broadway's most beloved shows, including Avenue Q, Chicago , Disney's The Little Mermaid, Grease, Gypsy, Hairspray, In The Heights, Jersey Boys, The Lion King, Legally Blonde, Mamma Mia!, Mary Poppins, The Phantom of the Opera, Spring Awakening, [title of show], Wicked, Young Frankenstein, Mr. Lachey's show, Monty Python's Spamalot, and more. All appearances are subject to change.

In addition to great singing and dancing, Broadway on Broadway will conclude with a grand finale: a "shower" of confetti.

"It is an honor to be hosting this year's Broadway on Broadway," commented Drew Lachey. "I am delighted to be a part of the Broadway community and I love this great city. I look forward to showing the Broadway fans from New York and around the world just what we have to offer."

"'You gotta have a gimmick,' someone once wrote, or sang. Closing down Times Square for a free concert of today's and tomorrow's Broadway shows to kick-off the new theatre season is a great beginning," said Charlotte St. Martin, Executive Director of The Broadway League. "At this year's event, we are excited to announce the launch of The Broadway Concierge and Ticket Center. Details will be announced next week."

"The Crossroads of the World once again welcomes theater fans from all over the globe," said Tim Tompkins, President of the Times Square Alliance. "What better host to lead the singing and dancing than Spamalot star and "Dancing with the Stars" winner Drew Lachey."

About The Broadway League
The Broadway League, Inc., founded in 1930 as the League of New York Theatres, is the national trade association for the Broadway industry. The League's 600-plus members include theatre owners and operators, producers, presenters, and general managers in 240 North American cities, as well as suppliers of goods and services to the theatre industry. Each year, League members bring Broadway to nearly 30 million people in New York and across the U.S. and Canada. Visit our website at http://www.broadwayleague.com.

About The Times Square Alliance
The Times Square Alliance, founded in 1992, works to improve and promote Times Square. In addition to providing safety and sanitation services, the Alliance coordinates many major events in Times Square including New Year's Eve, manages the City's busiest Tourism Center and advocates on behalf of its constituents with respect to a host of public policy, planning and quality-of-life issues. Visit www.TimesSquareNYC.org for more information.

About Drew Lachey
A native of Cincinnati, Drew Lachey is an accomplished singer, dancer and actor. Drew was last seen on Broadway as 'Mark Cohen' in the hit musical Rent. On television, Drew was most recently seen as the host of ABC's hit show "Dance War: Bruno vs. Carrie Ann." No stranger to dancing, Drew and his partner Cheryl Burke took home the first place trophy in ABC's second season of "Dancing with the Stars." Drew has also appeared on "Newlyweds: Nick and Jessica," "As the World Turns" and "Sabrina the Teenage Witch." Drew first rose to prominence as a member of 98 Degrees, which he joined with his brother Nick in 1995. The group recorded four successful albums, which sold over 10 million copies worldwide. Drew currently resides in Los Angeles with his wife Lea and daughter Isabella.