An interview with Nick Lachey 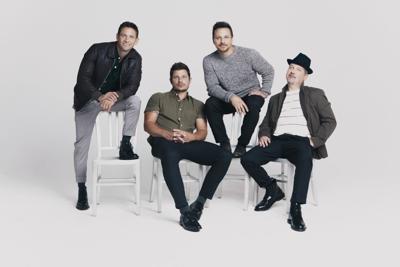 Nick Lachey has been a television host, a reality TV star, a dance contest competitor, an actor, a teen heartthrob (with 98 Degrees) and a solo artist.
Wearing many hats suits him well.
“I’d like to think I’m kind of hard to label,” Lachey says. “I enjoy being diversified and I certainly enjoy hosting and I enjoy music, obviously. I still perform as a solo artist, and I clearly love what I do with the guys (in 98 Degrees). So I’ve always approached my career as not trying to put any kind of label on it or define it. As long as the projects are interesting and something I enjoy doing, just keep on working.”
But now, 22 years after he first came to notoriety as frontman of 98 Degrees, that group seems to be taking a central role in Lachey’s career once again. And come 9 p.m. this Saturday, Dec. 15, they’ll take the stage at Borgata Hotel Casino & Spa’s Music Box Theater for a special Christmas-themed performance.
The group came together in 1996 in Los Angeles as a vocal quartet featuring four Ohio natives — lead singer Lachey, his brother, Drew, Justin Jeffre and Jeff Timmons. Initially 98 Degrees was marketed as a boy band, riding what was then a major trend in pop music.
Though 98 Degrees never achieved the mega-stardom of peers like the Backstreet Boys or NSYNC, the group was ultimately successful nonetheless. After notching a gold album with their self-titled debut, their second album, 1998’s “98 Degrees and Rising,” sold over 4 million copies and the 2000 album “Revelation” was a double-platinum hit. In all, the group has sold 10 million albums.
But in 2001 the group went on an extended hiatus that lasted more than a decade. Each of the members took on their own projects, with the Lachey brothers achieving enough success that 98 Degrees seemed like it might stay in the rear view mirror.
Though Nick Lachey released four solo albums during 98 Degrees’ hiatus, his biggest impact came through television.
Following his October 2002 marriage to singer Jessica Simpson, the couple starred in the popular MTV reality television series “Newlyweds: Nick and Jessica.” The series had a three-year run — just like their marriage, which ended in December 2005.
To this day, some people still associate Lachey, with “Newlyweds,” even though he has since married former MTV VJ Vanessa Minnillo, with whom he has three children. It’s a situation that he finds odd.
“I guess it’s a weird thing because it’s obviously centered around a chapter in my life which is closed and has been for a decade really,” Lachey says. “But it’s always interesting how much people still remember that show. So on that level, it’s flattering to have been part of something people enjoyed and was a success. Yeah, it is bizarre at the same time because it’s so not where my life is.
“I’ve been lucky enough, thankfully, to go on and do quite a few things since then and host a lot of things,” he adds. “So, luckily for me, my career has continued to evolve.”
Those later pursuits included hosting several television shows, including the a cappella singing competition show, “The Sing Off,” and competing in the 2017 season of “Dancing With The Stars.” Brother Drew Lachey won the second season of “Dancing with the Stars” in 2006 with partner Cheryl Burke. But Nick, who said he never considered himself much of a dancer, didn’t fare as well, finishing ninth in his season.
By then, things were gearing back up with 98 Degrees, which Lachey says never officially broke up. The group reunited in 2012 and returned to action. Last year the group recorded its second Christmas album, “Let It Snow,” and embarked on a holiday tour last November.
The tour was a success, leading to a second holiday tour this fall. Where at first it appeared that 98 Degrees might be only an occasional enterprise that would come together from time to time for different tours or projects, Lachey says the four members now consider 98 Degrees an active, full-time endeavor.
“We kind of view this as a year-round thing,” Lachey says. “I think as long as we continue to enjoy performing together and the fans still come out and support it we’re going to keep doing it. We enjoy each other’s company and enjoy performing together so I really don’t see any reason to stop.”
For now, the current holiday tour is the main focus. This year’s show — a mix of holiday tunes and songs from the regular studio albums by 98 Degrees — will not be a re-run of the show the group presented last year.
“We didn’t want to come in and do the exact same show again,” Lachey says. “We definitely are doing some different covers. I think that’s probably the biggest difference. There’s still a lot of our own stuff on the first Christmas record and last year’s Christmas record. Hopefully everyone will like it as much as last year.”