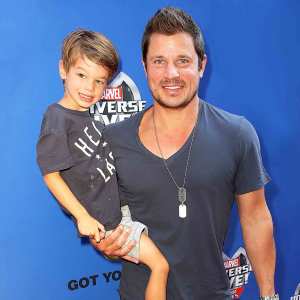 Mornings are the hardest for Nick Lachey when he’s touring with 98 Degrees. “I get up with the kids every day,” the dad of Camden, 5, Brooklyn, 3, and Phoenix, 13 months, told Us Weekly on January 17. “So when I’m on the road and I’m not there, it kills me.” But one thing that helps is checking in through a baby monitor app on his phone.

Though the 44-year-old says his brother Drew Lachey thinks it’s “creepy,” he has no plans to disconnect the Nest Cams. “Drew’s like, ‘You’re a voyeur,’” Lachey told Us. “But that’s the only interaction I can get. I just like watching them sleep. I like watching them move. I love being there with them and it stinks when I’m away.”

While the breakfast hour is the singer’s favorite time with his children, he relishes evenings at home with wife of six years Vanessa Lachey. “We put on Netflix, have a glass of wine and our night begins,” she told Us. Occasionally the parents venture out of their Southern California home for a date night. 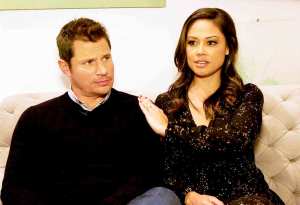 We always come back and say, ‘Oh, thank God we did that,’” Nick admitted. But according to Vanessa, 37, it’s hard for them to get motivated.


“It’s sometimes been like, ‘Man, I’m really comfortable. I don’t want to get ready. I don’t want to put makeup on,’ and he’s like, ‘I don’t want to shower and put jeans on,’” confessed the mom of three. “And we’re like, ‘Lets stay on the couch.’” But once they’re out of the house, it’s all good. “We’re excited that someone is serving us food and I”m not cooking and he’s not cleaning!” Vanessa told Us.


Nick and Vanessa stopped by the Us Weekly offices to promote the Pampers Baby Dry #SleptLikeThis campaign.