With three out of four members now in their 40s, 98 Degrees hardly qualifies as a "boy band" these days. But Drew and Nick Lachey, Jeff Timmons and Justin Jeffre are still bringing the energy as they come to Rosemont on Saturday, July 30, as part of their national "MY2K Tour."
The tour started in early July, and Jeffre said that it has been a blast.

"I think we're having more fun this time around than back in the day," Jeffre said. "We're all a little older now and feel less pressure. Our fans are older as well ... They're having drinks, having fun and reliving that era."
Joining them on the tour are pop stars O-Town, Dream and Ryan Cabrera.
As the name of the tour suggests, the bands are serving up the nostalgia of the early 2000s, a time when Jeffre believes things were more innocent.
"It was before 9/11, and things changed there," Jeffre said. "Now you have to take off your shoes at the airport and people worry about things that we didn't worry as much about back then. Also, social media wasn't around. It's such a key part to how people communicate today."
Jeffre said he is thankful for the lack of social media during the band's heyday.
"Hats off to the young artists that are coming in on their own under so much more scrutiny than we ever faced," Jeffre said.
The four members of 98 Degrees formed the band themselves and later got picked up by a record label. Their first album, "98 Degrees," came out in 1997. Five years later, the band took an extended hiatus to pursue other projects -- reality TV, solo albums and, in Jeffre's case, even a run for mayor of Cincinnati. They got back together in 2012.
Jeffre remembered the challenges the band faced in the beginning of their career.
"We moved out to L.A. and struggled for quite a while and put our lives on hold," Jeffre said. "Three of us were in college. Drew was an EMT (emergency medical technician) in New York so he already had his career. We were young enough to take a gamble." 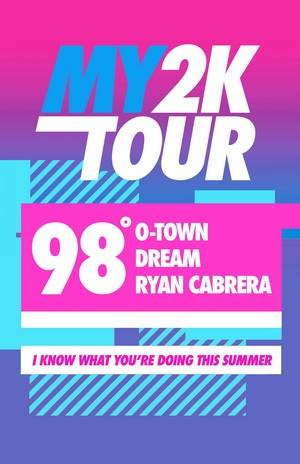 98 Degrees will perform at the Rosemont Theatre on Saturday, July 30.
Now, the members have to sometimes put their music lives on hold for a different reason.
"(Touring) is a lot more complicated when all the guys have kids and wives back home," Jeffre said. "They grow up so fast and we didn't want to miss a moment so we really had to adjust our schedule so that everybody keeps intact enough to see their family."
Fans can expect to hear the classic hits from back in the day, but Jeffre said that they should also expect some surprises.
"We're doing some things that we've never done before," Jeffre said.
At the West Palm Beach stop of the band's tour, 'NSYNC member Joey Fatone joined them onstage for a rendition of 'NSYNC's hit "Bye Bye Bye."
Jeffre said that they keep 98 Degrees going because it's what they love to do.
"We're fortunate to do what our dream job was," he said. "We have such incredible loyal fans that grew up with us and with our songs. As long as they want to keep coming to see us, I think we want to keep doing it."