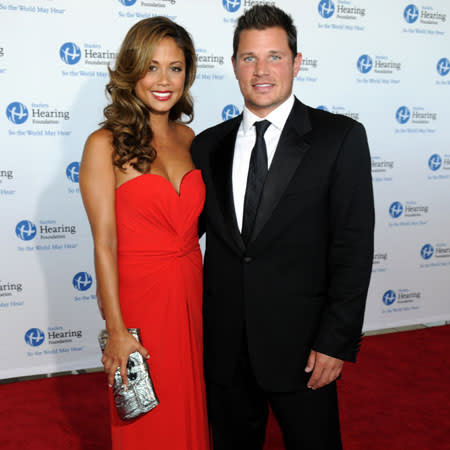 Nick Lachey has teased that he is going to “let himself go” before his imminent wedding.

The 37-year-old singer became engaged to stunning actress-and-model Vanessa Minnillo, 30, last year, and the pair have been busy planning their impending nuptials.

Nick has revealed he is looking forward to the big day, which he says is drawing closer. He doesn’t want to give any more details on the subject, other than that it will be happening soon, and joking that he won’t be working out in preparation for it.

"The countdown's begun,” he told People. "You know, the clock is ticking, so we're getting dangerously close. That's all I can say.

"I'm just gonna let myself go. She loves me for who I am, skinny or fat."

The heartthrob admitted he was only teasing, insisting that he wants to look his best for his beautiful bride Vanessa. The star said he will be visiting the gym to hone up his already muscled physique.

"No. Of course. Everyone likes to get in shape and try to look good on [his] wedding day, at least. So, I'll have to start hitting the treadmill regiment to get ready for it," he smiled.

Nick claims many details for the day of the marriage have not yet been confirmed, such as the menu at the reception or the all-important wedding cake. One subject which Nick is making a priority, however, is having a wild bachelor party.

"We're working on that," he smiled. "A few of the boys are here tonight, so we'll get some conspiring together and figure something out."