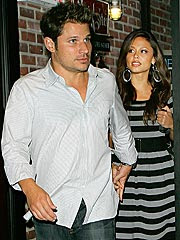 source
When it came time to give his girlfriend of over a year a Valentine's Day present, Nick Lachey was stumped.

"We have the same birthday in November. Then it's Christmas and then all of a sudden it's Valentine's Day," he told PEOPLE at a Hot Wheels event in New York City. (A diamond-studded car will be auctioned off later in the year and proceeds will benefit one of Nick's favorite charities, Big Brothers/Big Sisters.) "At that point, what else are you gonna [get]? So I try to be a little bit creative and think, 'All right, what can I do that's going to be a little different and special?'"

His solution? "I wrote her a song," Lachey, 34, dished. "I put down a demo of it. It's one of those things where [I've] gotten her plenty of things in the past but you want to think a little bit outside the box."

As for Minnillo, she surprised her man with Apple TV ("I think it's awesome!" he gushed), and the two celebrated with a romantic (albeit early: 5 p.m.!) dinner in California. (He had to make a flight that evening.)

"She and I are a lot alike," Lachey said, adding that while they're still not engaged, they've very happy. "What I've always loved about her is she's just real chill – we'll go play darts in the bar and have a pint – kind of girl. She's low-key and low-maintenance and we just have a good time."

So low-key, in fact, that the two have been hanging out at home quite a bit lately. "She and I are both easy-going – [We'll] rent a movie, [eat] pizza," he says. "[And] she's a great cook. She cooks a lot actually – chicken enchiladas, casseroles, lasagnas. ... She's definitely doing it right!"