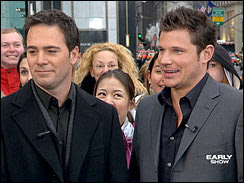 NEW YORK, Jan. 15, 2008
His ex-wife has been front and center lately on the sports pages, of all places, and now singer Nick Lachey is making news with a big-name sports figure, as well.

They stopped by The Early Show and spoke to Dave Price about it Tuesday.

The event will to be held in Scottsdale, Ariz. on Feb. 2, before Super Bowl XLII.

Proceeds from the associated Super Skins Online Auction and Super Skins Party will benefit multiple charities, including The Nick Lachey Foundation and The Jimmie Johnson Foundation," both of which are dedicated to assisting children, families and communities in need throughout the United States.

Lachey, a multi-platinum recording artist and Johnson, the two-time reigning NASCAR Sprint Cup champ, say they've pledged $125,000 each to the Super Skins tournament, alone.
Lachey told Price he and Johnson met through some mutual friends a few years ago and have gotten to know each other pretty well and we ljust thought, 'What a great opportunity -- so many people are at the Super Bowl that weekend -- what a great opportunity to ... raise some great money for a good cause."

Johnson said the goal is to have as many charities benefit as possible, and participating celebrities can designate charities of their choice.

Both said they expect the New England Patriots and Green Bay Packers to make it to the Super Bowl and, while they'd root for Green Bay, they expet the Patriots to prevail.