Interview: Jeff Timmons Talks About The Return Of 98 Degrees And His Solo Career 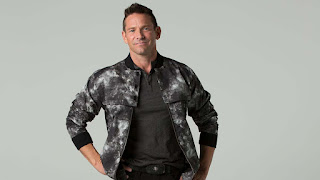 Jeff Timmons is best-known as one quarter of the multi-million selling band 98 Degrees, who made their debut in 1997 with breakthrough single ‘Invisible Man’.

In 2003 after years of success that saw them tour the world and notch up plenty of hits, the band went on hiatus as they pursued solo endeavours. 9 years later, the band reunited and in 2013 they released new album ‘2.0’, which was followed in 2017 with the festive collection ‘Let It Snow’.

This year, the band is celebrating their success with #98DegreesofSummer on social media and last Friday they released new single ‘Where Do You Wanna Go’.

I spoke to Jeff this week to discuss the return of 98 Degrees, look back on the band’s huge success and find out how he feels about his foray into releasing music as a solo artist…

Let’s start by saying that it’s one of Pop’s great injustices, that 98 Degrees weren’t bigger here in the UK…

There’s always still a chance, right? With the new song and the way things are so viral now, compared to when we were out the first time, there might be an opportunity for us just yet.

I was championing you guys all the way back in the 90s. I discovered your music when I was interning at a national newspaper and I was handed a CD of ‘Invisible Man’…

‘Invisible Man’, although it was our first song, I feel like that one made the most impact in the UK. We tried to come back several times but every time we went back to the UK, our label was getting sold. Every time we went there, unfortunately, we had a different staff so the only song that really sort of stuck, and it was only there for a second, was ‘Invisible Man’. Literally it was a blip on the charts. At that time the UK charts were quite different than the US. You had to follow up with single after single because they would come on the charts and then they were gone. I’m glad that you remember that and I’m flattered you know that song.

98 Degrees is back with a new song, ‘Where Do You Wanna Go’, and it sounds like classic 98 Degrees but also works in the current pop climate because it sounds so fresh. Why did you decide to release that song now?

We got really lucky with that song. We had been gone for a little while and music changed quite a bit (in terms of the) the way you distributed music, the sound of music, and all that stuff. We were traditionally known as balladeers and when we came back, we were trying too hard. We adopted a different sound and it didn’t really translate. We went with a label that had a different angle for us that they thought would be amazing and it didn’t work. This time, we were like, ‘look, how can we adopt the current sound while being true to what our sound is?’ and we felt that this exemplified exactly that. I’m glad you think it’s fresh, but you can still recognize that it’s a 98 Degree song. For those that don’t know, maybe it’ll introduce us to a new audience, which is always the hope.

I was surprised in the 90s that the press was so quick to just lump you in the boyband group with Backstreet Boys and N’Sync. To me, you were a lot closer to Boyz II Men, as 98 Degrees were all about the vocals and the harmonies. Was it frustrating for you to be categorised with the boybands?

I’ll be honest with you, at first it was. When I started the group Boyz II Men was the model. I was so enamoured with their sound and thought that there was a certain uniqueness that would apply to the way I would love to have my music out there, that we were really flattered when we got discovered at a Boyz II Men concert and we got signed to Motown like Boyz II Men.  Boybands weren’t prevalent here in the United States yet and it wasn’t until we went overseas and saw this onslaught of these boybands that we started being affiliated with this term. We felt that it was an insult in the beginning but certainly being lumped in with groups, and considered in the same era, as the Backstreet Boys and N’Sync, who we are dear friends with, now we’re embracing it. It’s always interesting to me that even though we never broke the UK, it was always the UK journalists like yourself that recognised that the sound was a little bit different. Here in the States they saw basically four white guys doing harmony and it was ‘oh, they’re a boyband’. It was a bit frustrating but certainly when you get all the drippings that come along with it – the worldwide fame and the fandom – you’re like, ‘OK cool, it’s not such a bad thing after all’.

For me 98 Degrees has always been about soul and the vocals. That’s always been the focal point and no disrespect to Backstreet Boys or N’Sync, both of whom I’m a fan of, but their brand was a little more smoke and mirrors and big production…

I’m very flattered that you have observed. Obviously you’ve done your homework. You were around in the beginning as an intern so you understood the gestation of that group and the foundation was the vocals. When we started out it was just four-part harmony. None of us played any instruments and certainly it was very difficult, unlike today, to just create tracks from scratch with inexpensive equipment. All we had was our voices and quickly we learned that performing live and outside and acapella got us very far. We were always priding ourselves on a true quartet – tenor, tenor, bass and baritone – and we’ve stuck with that for the songs. Production’s changed so it’s harder for us to get the younger producers to understand that we need to incorporate all four of the guys and their strengths, but we somehow are able to pull that across it and get that accomplished, especially with the most recent stuff we recorded.

You’re in the middle of #98DegreesOfSummer, which is going to end with the release of an EP. Where did that idea come from?

I wish we could take credit for coming up with the concept. We’ve got a new manager Johnny Wright, who as you know he manages Justin, he managed Backstreet (Boys) and N’Sync, and we never had a really, really strong management team. We thought this time, ‘this might be the last time we ever come out. Let’s do it right. Let’s go get Johnny Wright, he knows how to do this stuff’ and it was his brainchild. He was like, ‘let’s revisit and embrace the mistakes while we’re releasing new stuff. We’ve got the remix album coming out and the new music and and let’s pay an ode to your fans by allowing them to share in the nostalgia of you guys coming back’. He timed it out that 98 days would be a sufficient amount and teamed up with iHeart, because of our strong relationships and friends, they’re really supporting this and we can’t thank them enough. The campaign is just something that’s really smart and clever. Again, I wish I could take credit for that but you’ve got to give credit where it’s due and Johnny’s the man behind that.