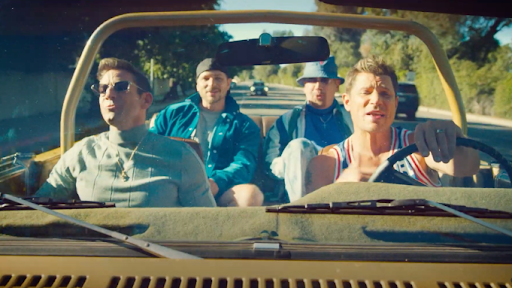 Cruising through California sunshine in a bright yellow, convertible Chevrolet pick-up truck while rocking bucket hats, turtleneck sweaters and backwards baseball caps, 98 Degrees embraces ’90s nostalgia in the video for the group’s new summer anthem, “Where Do You Wanna Go.”

Premiering on Variety below, the video sees the Cincinnati natives kick off the day with a sun-soaked, poolside barbecue in Los Angeles, before hitting the road, where switching the car’s stereo on transports them back in time.

“I just cannot believe we ever attempted to wear that stuff,” Timmons, 48, tells Variety about having fun with throwback outfits alongside bandmates Justin Jeffre, Nick Lachey and Drew Lachey. “Seeing the guys wearing that ridiculousness again really brought back the feels.”

While the impact of Covid-19 was felt with on-site temperature checking and masks, Timmons says it was otherwise business-as-usual on the shoot, co-directed by Stephanie Pearson and Aaron Eisenberg, produced by Anneliese Salgado and styled by Kirsten Stevens.

After being locked down like everyone else, being able to do what we love again was a total blessing,” he says. “Hanging with my brothers, filming a new video for the fans — it doesn’t get better than that.”

The single is the first of new music recorded by the group, which formed in 1995, while locked down at the Westgate Las Vegas Resort & Casino. The musicians also worked with DJ and producer Brandon Mashburn, aka DJ Lux, to remix past hits like “Invisible Man,” which will feature on an upcoming remix EP.

Co-written by DJ Lux, Aaron Space, Chantel Jeffries, Alexandra Veltri, Eva Honey and Stefan Lit, “Where Do You Wanna Go” and its accompanying video perfectly encapsulate how the group wanted to mark its first new non-holiday music in eight years.

“We’ve been racking our brains on how to stay true to ourselves and pay homage to the era that propelled us into the limelight, while embracing the current sound from a sonic and production standpoint,” Timmons says. “It was easy with such a well-written and well-produced song like ‘Where Do You Wanna Go.’”