Nick Lachey and Vanessa Lachey Have a ‘No Kids Allowed’ Vacation: We Love ‘Solo Time’

Parents’ day out! Nick Lachey and Vanesa Lachey enjoyed a solo vacation without their three kids.

Mom & Dad Weekend!” the former Total Request Live host, 39, captioned a Sunday, August 30, photo with the singer, 46. “No kids allowed. I LOVE our kids, but I Love our solo time together just as much! Weekends off from filming in Tahoe aren’t so bad! #LakeLife.”

In the social media upload, the couple grinned in front of a scenic backdrop. The former beauty queen rocked a striped bathing suit and a straw hat. 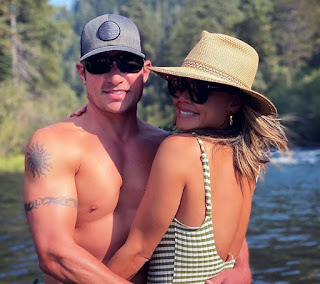 The couple share Camden, 7, Brooklyn, 5, and Phoenix, 3, and said that “anything is possible” when it comes to expanding their family.

“I mean, I still like my husband and he likes me,” Vanessa exclusively told Us Weekly last month when asked about baby No. 4.

She and Nick have been homeschooling their little ones amid the coronavirus pandemic, but don’t think they’re “built” for it.

In order to make the experience “positive” for Camden, Brooklyn and Phoenix, the former Wipeout cohost told Us at the time that she was writing them letters. “[I’ll] just give them a little extra love because I know what it’s like to be overwhelmed as a parent,” she explained at the time. “Could you imagine what it’s like for [kids]?”

Vanessa and Nick tied the knot in July 2011. In March, the actress called “shower sex” the secret to their marriage during a “Total Bellas” podcast episode.

“So I’m in the shower and I’m like, ‘I have a full day. You have a full day. It’s either now or never,’” she told Nikki Bella and Brie Bella at the time. “The kids are at school. It happens and then later that night, if you get like the cherry on top, great. But if not, we already did shower sex.”