The Lachey family could not get any cuter! Nick Lachey opened up to Us Weekly about how life as a family of five is going — and surprisingly, he describes their day-to-day with an infant as anything but chaotic.
Lachey, 43, and his wife Vanessa Lachey, welcomed baby number three, son Phoenix Robert, to the family this past December, joining son Camden, 4, and daughter Brooklyn, 2. 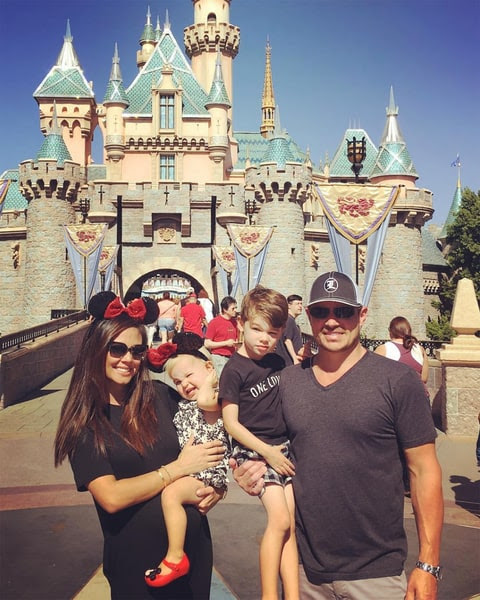 “Part of the fun of kids is the craziness and you’ve got to embrace that side of it as well,” he says of handling three children. And while they’re currently enjoying a quiet newborn, Lachey admits that he does see some trouble ahead. “I think the real chaos is going to come in a couple years when he’s two and Brooklyn’s four and Camden’s six… then I can just imagine it’s going to be craziness." For now, he claims that things with three children are still “fairly mellow.”
For now, the former boy-bander is enjoying his older kids while his wife focuses on the baby. “Everyday I wake the kids up,” he says. “Morning time is kind of ‘daddy time’ and that’s something I look forward to every day.”
One special daddy outing Lachey particularly enjoys is taking his kids to Disneyland — especially now that Camden is growing up.
“I was shocked because Camden was all about going on the roller coasters, which as a dad, that’s a day that I always looked forward to,” Lachey recalled of a recent visit. “So I said, ‘There’s this roller coaster about a runaway train, do you want to go on it?’ And he said, ‘Yeah!’ And we went on and he got off and just loved it. It was an awesome day.”
Camden is also following in his father’s footsteps in another way. “He’s into music and he loves to sing. We’ll put him to bed and on the monitor we’ll hear singing going on in his bedroom — and who knows what he’s singing about but you’ll hear him singing away!”
Lachey, who just helped launch the 2017 Lay’s ‘Do Us a Flavor’ contest on January 10 in Times Square, New York, admits to being a ‘snack’ kind of family and says that he and Vanessa are both anticipating the new winning flavor when it is brought to stores (the contest runs through March 19). Daughter Brooklyn can’t wait either! “She’s been eating chips. She’s always like, ‘More, more, more.’”