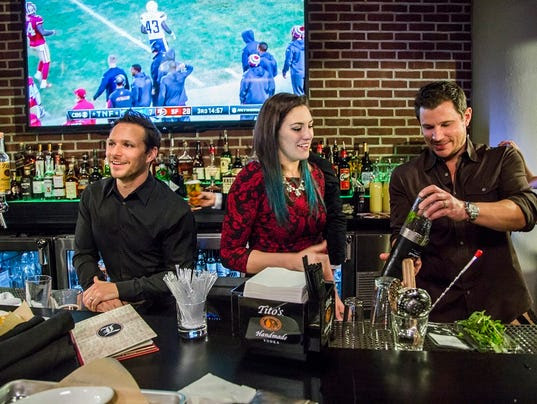 Are you Team "Stupid Freaking Idea" or Team "Investment?"
Those were the competing sides in Wednesday's "Lachey's Bar," the fifth episode of the A&E reality show documenting the journey of opening Lachey's in Over-the-Rhine.
Those team's namesakes: The sibling's two quotes explaining their position in the bourbon barrel debate.
Nick Lachey's negative response – he's the captain of team "stupid freaking idea" – to Drew Lachey's purchase of – or "investment" in – a one-of-a-kind Woodford Reserve bourbon barrel prompted the biggest conflict of the series so far.
The battleground actually stretched all the way to Kentucky. About three weeks before the expected opening of the sports bar, the Lacheys and a group of friends, including fellow 98 Degrees member Justin Jeffre, planned to trek the Bourbon Trail.
The idea was for the brothers and bandmates to purchase something special along the way for the bar.
"Ninety-nine percent of the bourbon in world is made just across river," Nick says. "Bourbon is a huge deal in Cincinnati."
Nick, however, is delayed by West Coast work and Drew, a non-bourbon drinker, is sent to 100 miles from Cincinnati without his bourbon-loving brother.
First stop: Town Branch Distillery in Lexington. "This looks like something from Willy Wonka and the Chocolate Factory," Drew says of the still.
The scenes along the trail serve as education for both Drew and the those in the show's national audience who may not be familiar with Kentucky's bourbon heritage. Distillers, for instance, explain why Kentucky produces so much of this particular liquor: It's because the area's water is limestone-filtered, with no iron in it.
"This is definitely not my wheelhouse," Drew says.
Ultimately, the spotlight that's been shining on Cincinnati in the first four episodes shined a bit to the south this week.
But that doesn't mean the Queen City was put in a corner. While Drew goes to bourbon school, we follow Nick back at the bar.
He's got to decide which television to buy. And goes with the largest option at 90 inches. "Go big or go home," Nick says.
The weekend is about to get even more expensive for the budding business owners.
At Woodford Reserve, Drew decided to take home a lavish souvenir. You know, the $12,000 barrel of bourbon we talked about earlier.
His friends do the math: The barrel is equivalent to some 220 bottles, making it about $54 a bottle. "I want to make sure it's cost effective," Drew says.
The master distiller also claims that there hasn't been a bar in the United States that's opened with a unique double-oaked single barrel from Woodford Reserve.
That superlative plus the results of the cost effectiveness equation is enough to get Drew on board with the barrel.
Nick, however, drops some of the only bleeped-out expletives when Drew shares his purchase. The result is the most heated argument of the series. But it's still mild. Think a low simmer, not a boil.
Still, Nick's visiting wife, Vanessa, is the one who turns off the stove, "putting in perspective what's ultimately important," Nick says.
The duo invites Drew over and Nick quickly raises a white flag with an apology. So, the battle of the bourbon barrel concludes.
The final words on that peace treaty? A joke, of course.
"I need a $12,000 loan," Drew says.